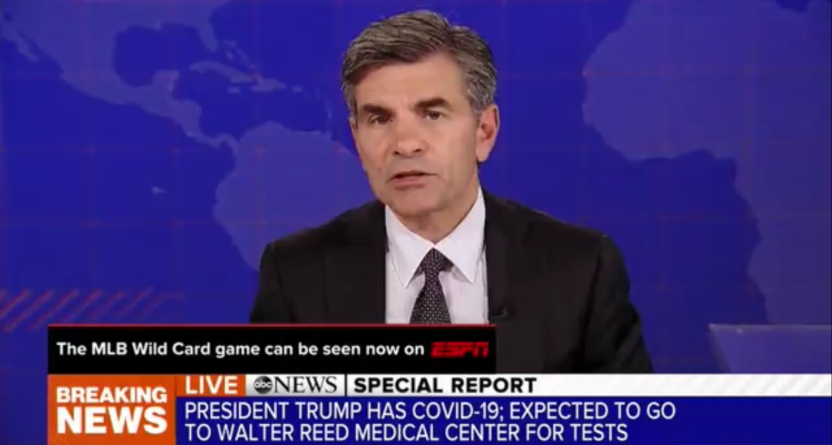 There are always plenty of people lobbying to put marquee sports events on broadcast TV networks, which are free to access (as long as you have a capable antenna) and thus have a wider footprint than cable channels. But, unlike sports-focused cable channels, those broadcast networks also have substantial obligations to cover major breaking news, and that leads to some notable interruptions of sports (both locally for natural disasters and nationally for breaking news). The latest one came during Friday’s MLB Wild Card Game between the Miami Marlins and the Chicago Cubs on ABC (this year has seen the first MLB games there since 1995), where the network cut away following the top of the ninth inning for a special report on U.S. president Donald Trump being taken to Walter Reed National Military Medical Center for COVID-19 treatment. They threw the conclusion of the game over to ESPN:

Here’s how ESPN picked that up, ending Around The Horn early and cutting Sarah Spain off mid-sentence (play-by-play announcer Jon “Boog” Sciambi did acknowledge the shift as the game resumed, though):

Here’s how the game ended, with a 2-0 victory for the Marlins:

And here’s how ESPN then resumed studio programming with Pardon The Interruption:

While this was unfortunate for some MLB fans watching this game who get ABC but not ESPN, this was still a reasonably logical move for ABC. This is a major news story, and their counterparts at CBS and NBC have broken into regular programming for it in many markets as well. (In the Bay Area at least, Fox has stuck to their usual programming, but that’s an Extra episode discussing celebrity tweets on this very topic; Fox also keeps their national news operation to cable, so there isn’t the same impetus for them to cut in as there is for the other broadcast networks.)

And while ABC definitely took criticism for this move, especially with that coming at a crucial moment in a playoff game, they might have taken even more if they hadn’t made it. Shifting the MLB game over to ESPN was announced on-screen, and with graphics during the ABC report, and it works for most of the viewers (albeit not all). And while this did lead to some schedule disruption, that wasn’t all that major; yes, Around The Horn got cut off early, but it absolutely makes sense to do that in favor of live sports. (And it’s currently airing in full on ESPN2, so those who desperately want to see how that program ended can check it out there, or online.)

So, all in all, this does feel like a reasonable move from the bosses at ABC. But it is also a further illustration of the challenges of putting big sports events on broadcast television. Yes, that comes with a greater reach. But broadcast networks are going to cut into sports programming if something important happens, even the most important  sports programming. And that doesn’t happen at sports-focused cable networks.