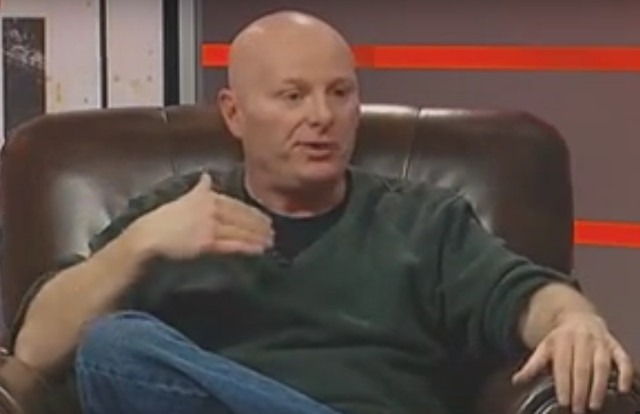 Some Toronto Blue Jays players aren’t happy with certain members of the media, but the level of their displeasure and whether it’s problematic is hotly disputed. Steve Buffery of The Toronto Sun (seen above, from a 2010 Casino Rama Grill Room (a former Canadian sports talk show) appearance took this fight public with a “What’s going on inside the Blue Jays clubhouse?” column Thursday both complaining about media members’ Xed-out pictures in the clubhouse and citing them as evidence of a “leadership void”:

You have to wonder if this team, once clearly in the driver’s seat for a playoff spot but now fighting tooth and nail just to make the wild card, is coming apart at the seams and if there’s a leadership void inside the clubhouse.

Why, for example, would the leaders on the team allow someone to put up on a wall photos of two Toronto sports writers with an ‘X’ scratched on their face and the a message written on top reading, ‘Do not grant them interviews’ (or words to that effect)?

On the surface, a pretty juvenile stunt. But also unprofessional. And it’s something, a couple of journalists pointed out to a Jays official, the New York Yankees would never allow in their clubhouse.

And it’s not just those photos. There have been a number of incidents inside the Jays clubhouse recently that suggest that there may be a bit of panic setting in.

Things like: Someone cranking up the music just when the media arrives to conduct pre-game interviews. That’s happened more than a couple of times. It happened again on Thursday. Again, on the surface, silly, stupid. But, again, unnecessary. The media have a job to do, just like the players. Fans almost always take the side of the players when there’s an issue with the media, but teams with confidence and swagger don’t need to pulls stunts like putting pictures of writers on a wall.

Buffery’s not wrong that cranking up music to damage interviews or instructing all players to avoid certain journalists can be problematic, but the “The New York Yankees would never allow this!” is a bit of a ridiculous comparison (and there are undoubtedly Yankees’ beat writers who have tales of access issues they’ve run into with that franchise).

It’s also worth noting that Buffery doesn’t say these media members actually were denied interviews, just that their photos were put on the wall. And, as Deadspin’s Tom Ley notes, Buffery goes on to hurt his own case, demonstrating why some Jays might not be thrilled with the media:

There was an incident the other night when a couple of journalists tried to corral struggling closer Roberto Osuna for an interview, but he kept blowing them off. Finally, one reporter followed him right into a private part of the clubhouse and told him off. Certainly something nobody, especially a young player like Osuna, needs.

Chasing someone who’s insisted they’re not going to talk to you into a private part of the clubhouse and “telling them off”? Now that sounds unprofessional. Athletes in all sports regularly decline interviews, and they’re usually perfectly entitled to do so by their team and league media policies. If the closer won’t talk to you, talk to other players about him, or write about him not talking to you. Chasing him around and berating him sounds like a bit much.

Moreover, it’s worth noting that veteran Blue Jays’ reporter John Lott (formerly of The National Post, now covering the team for Vice and Jays Nation) took apparent exception to how Buffery is portraying this:

@LottOnBaseball I agree with you John. This is the Blue Jays' version of Phil Kessel and the hotdog.

The JPA story was different. *He* made it a story, not the media. Journalists’ wounded egos should not be the story. https://t.co/i1xuQHu1RN

Based on what’s been reported so far, it’s hard not to agree with that. If the Jays are actually preventing accredited reporters from doing their job on a team-wide basis, that’s problematic, but that doesn’t seem to be what’s going on here. Loud music and pictures? That’s just a blow to the ego, and one journalists should have a thick enough skin to deal with. And it definitely doesn’t suggest much of a “leadership void.”

No matter how much certain media members would like to find a correlation between interviews and performance, it’s hard to conclude that the Jays’ on-field results have much of anything to do with their dealings with the media.