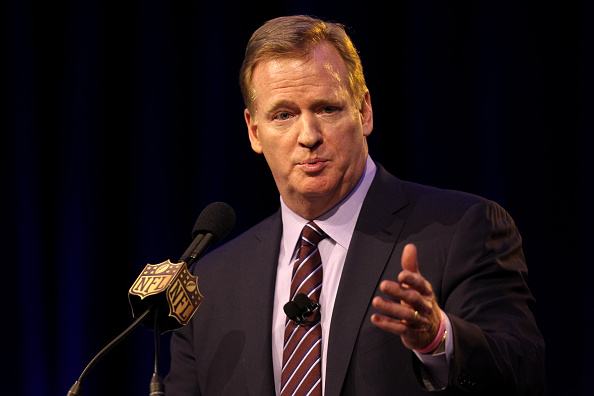 It used to be that Major League Baseball was the sports league that stuck their head the furthest down in the sand when it came to social media. How many years did it seem like we, those cyberhumans engaged in life on the internet, complain about MLB’s strict policies about video highlights and making content more widely available that did nothing but hurt fans by making content tougher to find and share.

Fortunately, MLB evolved and has come to realize the whole point of “social” media is being “social” and sharing your content so more people have more access to your product.

Unfortunately, the NFL has stepped up to fill MLB’s shoes as the kings of being anti-social. In fact, the NFL has completely surpassed anyone else when it comes to their lack of understanding about social media and heavy-handed crackdowns on entities daring to share NFL videos, Vines, GIFs, or anything else.

And now the latest development may be the most bizarre and the most extreme example of an anti-social social media policy.

Via Albert Breer and The MMQB, the NFL is now telling its own franchises that its team Twitter accounts can not share any video or, get this, “MOVING CONTENT” during games. Incredibly, the punishment for daring to post a video or GIF of NFL game action on an NFL team account is a $25,000 fine for just a first-time offense. That fine increases to $50,000 and then an absurd $100,000. Hello!

So how concerned is the NFL? Well, something interesting is happening. We’ve obtained a memo that went out to all 32 teams reflecting that, starting Oct. 12, clubs are subject to a new fine schedule for exceeding the limits on video and any moving content. Those are particularly strict during the 60 minutes leading up to games, and through games, with clubs largely limited to re-posting from the NFL’s own accounts (with some allowance for approved content on Snapchat). The memo says that first-time offenders will be fined up to $25,000, a second offense will warrant a fine of up to $50,000, and a third offense will merit a fine of up to $100,000 and loss of rights to post league-controlled content. To put that in perspective, Broncos safety Darian Stewart was fined $18,231 for his high hit on Cam Newton in the opener. Under this policy, if Denver had posted video of the hit, the team could incur a heavier penalty for a first-time offense. And it’s also interesting that the memo went out last week, rather than during the offseason. The NFL, for its part, says the new enforcement measures are unrelated to the ratings issue, but it is—at least—a sign that the league is being increasingly careful with its most valuable content.

An NFL spokesman told Mashable, who also received the memo, that the new social media regulations have been on track for some time and did not have anything to do with the current dip in ratings. And according to Mashable, the ban on “MOVING CONTENT” doesn’t just relate to the NFL. It’s apparently any moving content. No Tom Brady dance moves, no footage from pregame, no high-fives on the sidelines, no nothing. This tweet would now be a $25,000 fine for a franchise because it took place during a game.

The fact that this has been in the works for some time makes this story even more mind-blowing because the ratings angle would at least be a reason for one of the more ridiculous examples of micromanagement in the history of the known universe.

What are team Twitter accounts supposed to do? Just bland play-by-play with retweets of the NFL’s main Twitter account when they want to share something interesting? How are they supposed to maintain or grow their audience by being robotic droids who have to seemingly have every single tweet personally approved by Roger Goodell? Is there seriously someone in the league office whose job it’s going to be to monitor all 32 team-controlled Twitter accounts to make sure they don’t commit the heinous act of sharing a Community GIF 58 minutes before kickoff?!?!

DO YOU REALIZE HOW INSANE THIS SOUNDS???

In their Pinky and the Brain like quest for world domination, it’s clear what the NFL wants you the fan to be forced to do – go to NFL.com, follow the NFL on Twitter, and exclusively consume NFL-approved content to satisfy your football fandom. Why? So the NFL can get the followers, clicks, and advertising plays that go along with it. This is a revenue ploy, pure and simple, forget everything else.

Social media and the internet doesn’t work that way, which is something that everyone but the NFL understands. The only thing the NFL is accomplishing here is making their team accounts less followable, stunting their growth, and lessening their reach. The NFL is trying to make it as difficult and joyless as possible for you to follow your team, all in the name of protecting the shield. It’s exactly how you don’t want to run a business and how not to reach fans on social media. But it’s just par for the course for the NFL.