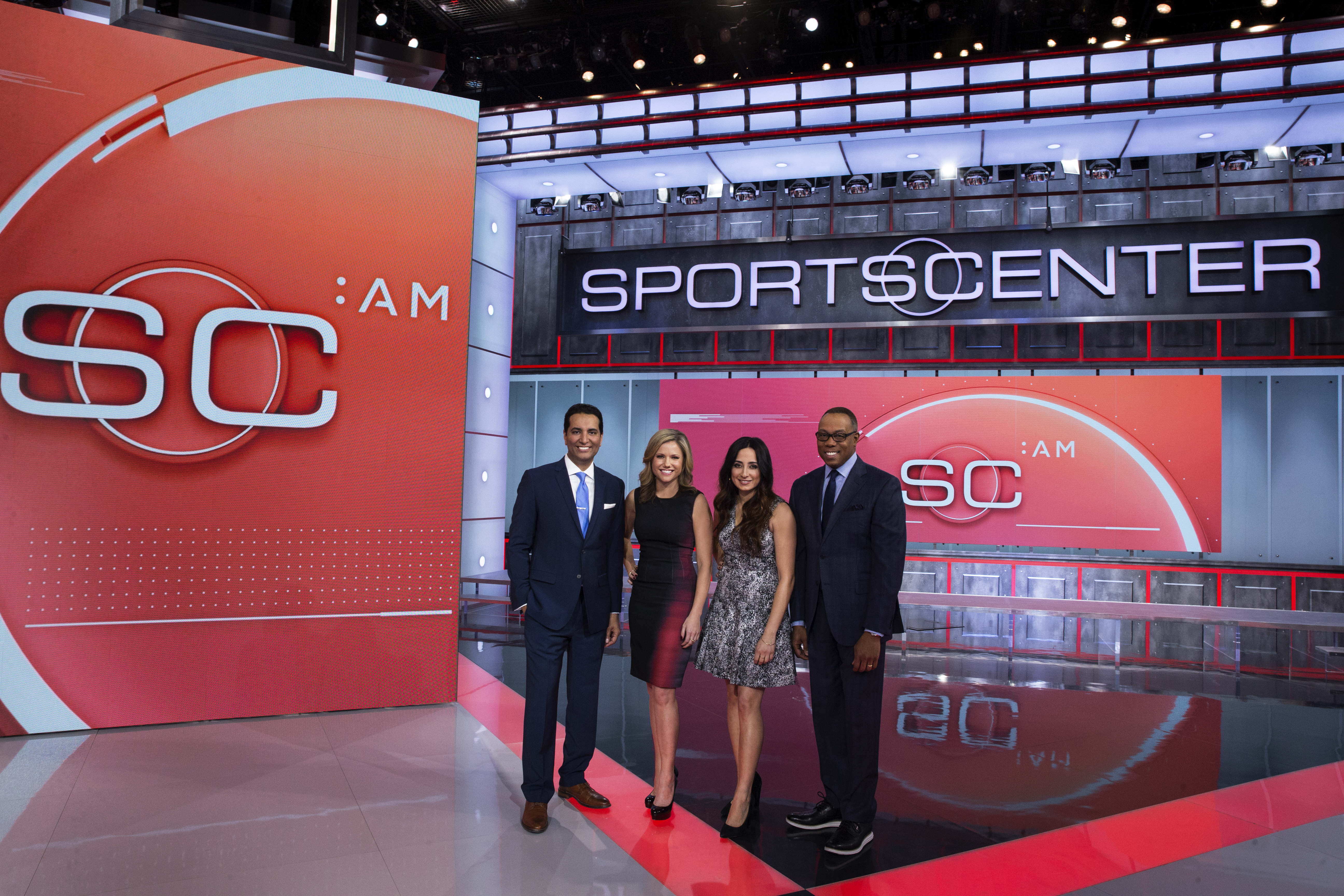 After last year’s rebranding of the late-night SportsCenters, ESPN decided to retool three live hours of early morning SCs as SportsCenter: AM. The three-hour live program, which airs from 7-10 a.m. eastern, debuted last week. Does it improve upon the well-known SportsCenter formula or is it just another attempt to revitalize the program?

There are a lot of great changes to the format that make SportsCenter: AM a better fit for the early morning audience. Between constant timestamps on the rundown and a larger clock atop the left column, no one is going to be able to use watching ESPN as an excuse for being late. The graphics are extremely reddish-orange and look similar to ESPN’s slick format, but just different enough to let people know this isn’t a generic episode of SportsCenter.

Overall, the show structure needs work. The 8 AM hour is labeled the “top hour,” which makes me question why I was watching at 7 AM. Each anchor gives his/her top play, though the Top 10 Plays don’t occur until the end of the final hour. During the 7 AM hour, there are “Morning Mention” and “Standing O” segments, shorter blurbs that aggregate important stories and highlights in a rapid fire setup, but they are not branded as such on the rundown. If they get their own graphics, why not keep the branding on the left column? These work well when I only have a few minutes to get my sports news before heading off to start the day. Too bad this is only a one-time segment across the three hours and does not really repeat later on.

And that is where SportsCenter: AM is in an identity crisis when looking at the whole. Is it a three-hour show or three one-hour shows? Being in the middle makes it confusing and clunky. Sometimes, highlights are repeated multiple times within an hour while others do not show up until later on. ESPN’s official release designates three separate hours, but they all tend to lead off the same and don’t feel markedly different.

Certain segments make it feel like ESPNEWS’s old half-hour Highlight Express (which I really enjoyed) while others make it feel just like another SportsCenter. People cannot be expected to tune in for 180 minutes, so they are missing out by watching in bits and pieces. For that reason, I understand repeating highlights multiple times within the same hour, such as buzzer beaters, hat tricks, and big wins. It seems like ESPN wants to take the mentality of watching highlights on a phone and put it on television based on the minute marks, making the idea of a three-hour tour even more of a head scratcher.

I love the minute markings on the left column rundown because they let me anticipate a commercial break. However, when I watch on WatchESPN, there is a delay of about 90 seconds that makes these useless. They also fail me when the upcoming highlights are removed before they happen. For example, instead of the 8:12 timestamped highlight being removed from the rundown at 8:12, when the highlight is aired, it gets removed at 8:10. Not to mention, there were times that highlights not on the rundown were teased, which makes it an imperfect setup. Luckily, it can be improved upon and easily fixed. 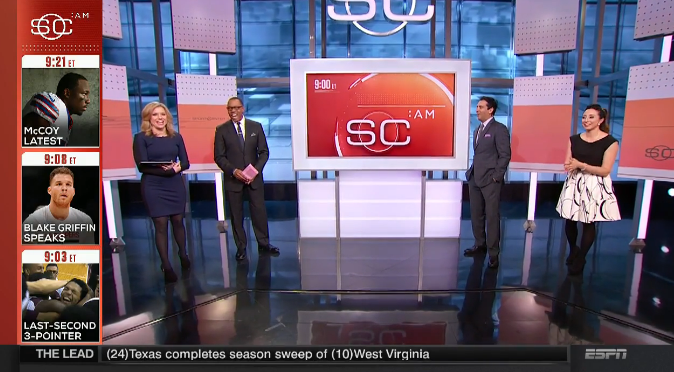 Instead of one or two anchors, this version of SportsCenter has three-and-a-half. Jay Harris, Kevin Negandhi, and Jaymee Sire are all anchors by trade. They are joined by Sarina Morales, who pops in and out, usually with a social media-heavy or light-hearted story. It’s weird to see her introduced at the beginning of every hour because sometimes she’s at the anchor desk and sometimes she’s not. When Morales is missing, the desk looks uneven and lopsided because Sire and Harris are on one side while Negandhi is lonely on the other.

I think Morales should be labeled an anchor and kept on set more often, especially since most of the time only one or two anchors are on screen, anyway. It’s awkward having her “reintroduced” every time she’s on camera. Not to mention, one of the days I watched, she narrated a highlight montage for the NBA at the All-Star Break. But I understand the other side, as well, because she was used eight times (by my count) during Monday’s three hour show. I feel bad for the intern who has to move her chair on and off set for when she’s at the desk.

Regardless of their seating position, all three main anchors are great at giving highlights. Negandhi and Harris are veterans who can host SportsCenter in their sleep while Sire injects personality into her highlights and is definitely on the rise at the network.

In an era where highlights are easily accessible on my phone, SportsCenter has had to adjust to the changing landscape. Instead of contracting what was once its must-see studio show, ESPN has doubled down and is airing more original and more unique versions of SportsCenter than ever before.

The new SportsCenter: AM is ultimately being pulled from both sides. If it’s just another version of SportsCenter, which it seems to be, there is not much more incentive to watch. It is nice to see a live edition of the show when you get up in the morning, but unless there is breaking news, the highlights have not changed overnight. If SportsCenter: AM is supposed to be ESPN’s version of Good Morning America, is doesn’t invite a wider audience in.

I enjoyed SportsCenter: AM as another one of the numerous iterations of ESPN’s longest-running studio show. I just don’t know what its purpose is most of the time.

Alex Kaufman is a Spanish and communication double major at Denison University. He loves to consume and cover sports and sports media, hosts a sports talk show on 91.1 WDUB, and can be found on Twitter @NSF_Alex and at his own website, neuroticsportsfan.com.