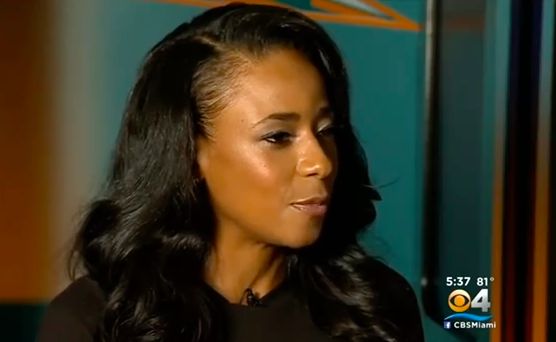 We’ve seen not just criticism of NFL players’ anthem protests, but criticism of the criticism, and Miko Grimes is the latest personality to provide the latter. Grimes, the former radio host who’s married to Tampa Bay Buccaneers’ cornerback Brent Grimes, has been booked for battery and resisting arrest at a NFL game before, and has launched numerous infamous rants against members of the media, including blasting three Miami reporters for defending quarterback Ryan Tannehill (while her husband was still playing for the Dolphins), telling a Miami reporter to “eat my ass” after he wrote about her tax issues, and launching an anti-Semitic diatribe against Dolphins’ VP Mike Tannenbaum and Fox reporter Jay Glazer. Her latest? Going after Sage Steele for Steele’s criticisms of Bucs’ WR Mike Evans’ anthem protest, and using incredibly racially-charged and sexually-explicit language in the process (viewer discretion advised):

Grimes then pulled off the remarkable feat of being less sensible than Jason Whitlock (who somehow thinks Steele’s comments don’t count as a rip of Evans):

Sage Steele did not rip Mike Evans. For The Win headline intentionally sensational and irresponsible. #CyberMediaPreyOnHumans

but when it happens to me its ok because I'm just regular black huh? tell her put her cooning ass big girl panties on and suck it up! https://t.co/SVUv4snPIk

Steele’s comments certainly can be criticized, and she definitely does seem (like many others) to be unnecessarily conflating protests with disrespect to the military. However, this isn’t the way to do that. Supporting Evans (who, by the way, said Tuesday he doesn’t plan to protest during the anthem at future games) is fine and reasonable, but  Grimes’ comments here are ridiculous, inflammatory, and disgusting. There’s no need to call Steele racially-charged names or say anything about her private life. It’s one more case of Grimes going on a ludicrous and racially-provocative rant, and one more case where she really didn’t need to.