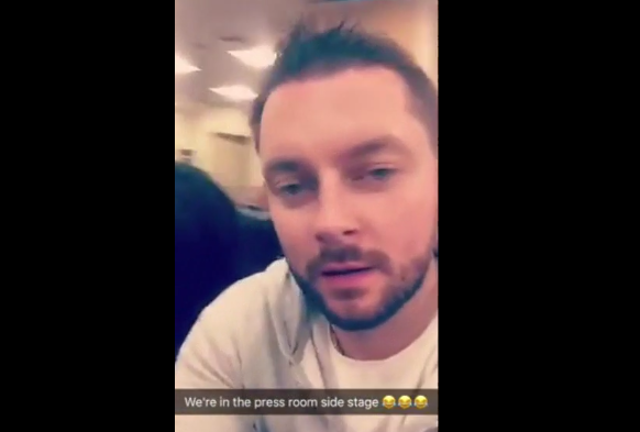 For some inexplicable reason, we’re seeing people not only sneak into sports events with media passes, but publicly brag about doing so. Phil Braun wrote a piece for Deadspin last month about how he invented a fake newspaper to “cover” the Atlanta Braves in 2000-01, and now two guys have posted a Snapchat video detailing how they snuck into Saturday’s UFC 205 at New York’s Madison Square Garden thanks to creating some fake media passes:

It’s amazing that these guys were able to create believable passes just by taking a photo of someone else’s and editing it, but that speaks why some organizations (like the NCAA around the Final Four) are paranoid about reporters posting photos of their credentials on social media. That wouldn’t even have stopped these guys, though, as they managed to get an in-person photo of the credentials of someone who did nothing wrong. They also picked a smart outlet to impersonate in Fox Sports; Fox broadcast the night’s preliminary fights and was extensively covering the event, so there would have been a ton of different people there with Fox credentials (preventing anyone checking passes from immediately finding these fishy), and Fox has enough different divisions (TV, online, radio, etc) that it’s conceivable any Fox employee who saw these guys and noted their pass wouldn’t realize something was wrong just because they didn’t know them.

Doing this, and publicly bragging about it, feels incredibly stupid, though. Media passes typically have legal boilerplate on the back that says something along the lines of “Any unauthorized use of this credential subjects the bearer to ejection and prosecution for criminal trespass,” and while many sports organizations may not go to the bother of prosecuting someone, it’s quite conceivable that the UFC would. Their fights are pricey tickets, and this one was in particular, as Kristi Dosh wrote at Forbes:

Vivid Seats, an online ticket marketplace, reports the average price of ticket sold was $1,237, with a median price of $1,598. Some fans dished out as much as $4,532 for a single ticket, while the cheapest ticket sold was $499.

That’s a lot of money to be cheating the UFC out of, and that’s what these guys are doing. Illegitimately posing as media to watch a ticketed event you’d otherwise have to pay for shouldn’t happen. It’s also possible that moves of this sort could lead to further crackdowns on credentialing and access for legitimate media, which is already quite a fight in many cases (especially with organizations like the UFC that have been notably hostile to reporting). I get the appeal; people want to watch sports events, and pulling off a media scam like this lets you do it for free, if you don’t get caught. Heck, there have even been stories of people sneaking into press conferences just for the free food. But this sort of idiotic behavior not only risks criminal prosecution, it makes the battle for access even tougher for the journalists who are actually trying to do their job, not just illegally watch a fight for free.