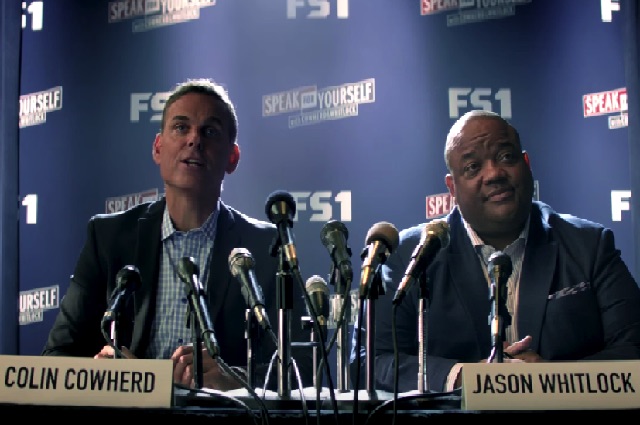 Monday evening, FS1 debuted the premiere of its “Embrace Debate” centerpiece featuring Colin Cowherd and Jason Whitlock, Speak For Yourself. With social media and the sports internet loaded and ready to attack this latest example of two talking heads tossing strong opinions at each other, how would these veteran provocateurs present themselves to their brand new audience?

Well, Whitlock made a bold choice to begin the show, knowing that this would be the first impression he’d make to TV viewers and those watching on Facebook Live or clips on Twitter.

Instead of Jonny Ivey or Eddie Cue, I want @WhitlockJason to introduce the iPhone 7 in this hat. pic.twitter.com/PqI6x9YKy2

Was the hat a stylish touch or trying too hard to look cool? Maybe a little bit of both, though leaning toward the latter. (The person watching the show with me thought it was a poor choice of hat for Whitlock’s face, so maybe he needs some further consultation in wardrobe matters.)

Maybe the hat would have worked better if Whitlock had ditched it later in the show. That’s not to suggest he should have taken it off and tossed it at the crew. But like someone coming to dinner or a party, maybe take off the hat and get a little more comfortable. But maybe it was a first-night flourish. We’ll see if Whitlock recurringly sports fancy headwear in the days, weeks and months to come.

Getting past the hat, there was still an hour to go of Speak For Yourself. Deadspin has derisively called the show “All Takes Matter” during its development. So how were those takes? And did they really matter?

Cowherd and Whitlock began with the very sports talk-ish topic of whether or not the Warriors are disrespecting LeBron James and unnecessarily provoking him by questioning his manhood and his emotional sensibility. That’s a different angle than analyzing the Cavaliers’ chances of winning Game 5 (which is likely how Pardon the Interruption would approach the topic), but that’s probably not what to expect from these two personalities either.

To be fair, the two hosts did move on to a Game 5 preview and that’s where Whitlock introduced a point that he went to over and over again throughout the show: The NBA Finals are a match-up of city kids (Cavaliers) versus suburban kids (Warriors).

He elaborated to say that Cleveland is guilty of playing hero ball with LeBron and Kyrie Irving trying to take over the game, while Golden State has the discipline to play within its system. Apparently, that’s not as easy a sound bite as “city kids versus suburban kids,” but Whitlock would have been better served to lean on that one a bit less.

Speak For Yourself also has a third component to the show, with The Big Lead’s Jason McIntyre joining the discussion to tee up particular takes on news of the day at Cowherd and Whitlock and letting them swing away. It’s pretty similar to the “Buy or Sell” segment on Around the Horn, with McIntyre making a statement that the two hosts can either agree or argue with. First up was Steph Curry’s wife, Ayesha, taking a shot at LeBron James on Twitter.

"It's about knowing your role and your lane." – @WhitlockJason on Ayesha Curry's tweet about LeBron Jameshttps://t.co/gq6CbaFNkc

Here’s where a show like Speak For Yourself is probably going to make its reputation by saying something deliberately provocative to court controversy. Whitlock saying that Ayesha Curry should “stay in her lane” and “know her role” came off as incredibly sexist, in addition to being out of touch with social media’s impact on our culture.

Whitlock basically saying that women should keep quiet actually put Cowherd in the position of appearing enlightened by saying that his wife is always entitled to a strong opinion, while McIntyre seemingly couldn’t believe what he was hearing. Maybe that was the intention here, for Whitlock to take the “I can’t believe he said that!” role (“Know your role!”) that will presumably keep people tuning in to hear what he says next and for these brutish takes to circulate online and give Speak For Yourself the publicity it needs.

Ultimately, it felt like Whitlock trying a bit too hard to be controversial — kind of like when he loudly said “balls” when referring to where Draymond Green swiped at LeBron James, rather than saying something more delicate than “groin” or “private area.” That’s apparently the brashness we’ll be getting from 6 p.m. to 7 p.m. on FS1 five nights a week now. But it felt more like HBO showing nudity or FX using the s-word to demonstrate that they can. 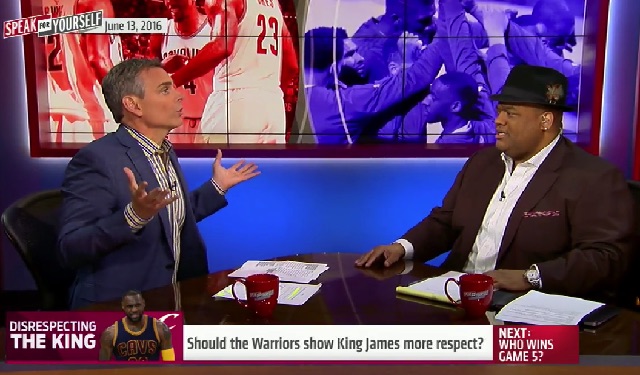 Going from Cowherd and Whitlock talking to each other to McIntyre playing more of a host role with the two later on is a nice mix-up for the show, which is certainly necessary over the course of one hour. The segments with McIntyre worked better if for no other reason than the pace was a bit snappier, and there were more reactions on set whenever someone said something outrageous.

The interview segment, in which Whitlock talked to Metta World Peace, didn’t work as well, but that may have had to do with the interview subject. If Speak For Yourself can get strong guests who are good on TV like PTI does, then Whitlock’s interviews could be better. But his questions may have something do with that as well.

A show like Speak For Yourself is in a tough position of trying to be something different from the other debate shows that are already on the air, yet not straying too far from a successful formula. The debut episode surely seemed familiar, maybe a bit too familiar to viewers. But as the sports news cycle provides more to talk about, and maybe Cowherd and Whitlock get better at keeping the pace moving along — rather than stalling on a topic or opinion — there’s no reason why this show shouldn’t be relatively successful.

But success or failure will ultimately depend on whether or not viewers like Cowherd and Whitlock — and more importantly, if they care about what these two have to say. That’s the only take that will matter.