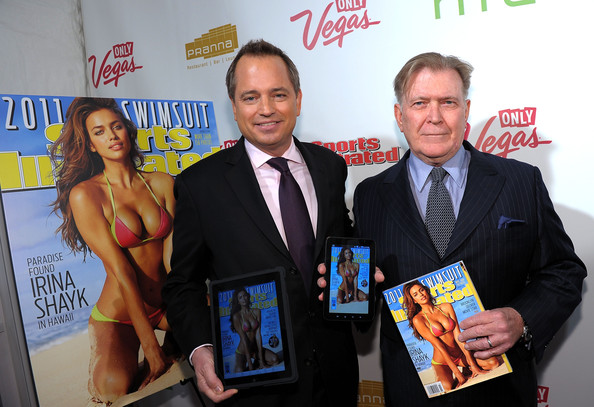 A long-running subject of discussion around Sports Illustrated is the annual Swimsuit Issue, which is regularly one of the magazine’s most popular and lucrative issues, but has also taken a lot of criticism for its portrayal of scantily-clad women and its limited connections to sports and to the rest of the magazine’s brand and content.

Some of that kind of criticism has been previously made in public by SI staffers and ex-staffers, but it’s notable to hear just how many of the staff have voiced their issues with the Swimsuit Issue (which has now expanded into a whole Swim Daily site, a TV special and more, in addition to the traditional magazine).

SI’s Richard Deitsch interviewed Terry McDonell (seen at right above at a 2011 Swimsuit Issue launch party), the managing editor of SI from 2002-2012, on the SI Media Podcast earlier this week, and while their whole conversation is interesting, the part on the Swimsuit Issue really stands out, with McDonell saying a survey he did revealed strong opposition to Swimsuit from one-third of the staff.

Here’s the podcast: the part in question starts around 18:00, where Deitsch asked “Where do you see Sports Illustrated in the marketplace, and what in your opinion must it do, I don’t want to say to thrive, but even to survive in five or 10 years as a brand?”

McDonell says “I leave that to you all,” but then talks about SI’s platform expansion both during his reign and after, and brings up the idea of SI events, particularly focused on the Swimsuit Issue.

“From 2007 on we tried to push out on as many platforms as we could, and SI is still doing that. The more platforms it can dominate and show off on, the better it will do. I see that as a continuum, from what I was doing on through the last three or four years, Sports Illustrated is doing that. Sports Illustrated is moving into events, Swimsuit is now an event as well as the issue and all that. That’s not simply a “cheesy move,” as I have read it described at some places, that’s how the Aspen Institute makes money. You know, these events are not crazy. So there’s that also, that will be an interesting flow of cash.”

After that, Deitsch takes the opportunity to dive into Swimsuit further.

“All of us get this who have worked here for a long time, we face questions like ‘What do you think of Swimsuit? Doesn’t Swimsuit hurt your brand?’ There are groups of us who have worked for the Swimsuit Issue like myself who do not apologize for it. Quite frankly, it’s the reverse; we celebrate it, and it’s a great brand for what it is. No one is saying it has anything to do with the other parts of sports we cover. Not only is it a revenue generator, it’s a really well-done publication. Obviously I have colleagues, and Peter King was famous among them, who think we should kill it. To me, that’s kind of a naive way of thinking. How did you answer those questions when someone would inevitably say ‘Why is Sports Illustrated in the swimsuit business?'”

McDonell responded by talking about the survey.

“Well, I tried, again, to be collaborative and open, so when Peter came to me with that, as he did with some other people, I guess in probably 2003 or 2004, I did a survey among all the employees as you may recall, asking ‘What did you think of the Swimsuit Issue?'” he said. “And a third of them were offended by it and thought that it was very harmful to the brand and not what sports should be about, or Sports Illustrated especially should be about, and that we should get rid of it or give it to someone else or do something with it, and not keep it within Sports Illustrated as such an important part of the brand. Another third of the people thought ‘Well, maybe it’s not the greatest thing, but it’s a real good business for Sports Illustrated to be in, and we’re fine with it. And it looks pretty good and sometimes I like it, and that’s fine.’ And the other third could not believe that I had done that survey. They thought that was such a preposterous idea that I would even check.”

“Yeah, that was me,” Deitsch said.

“And that we should, just, you know, just full speed ahead,” McDonell said. “So I explained that to everyone, or tried to, in a memo, and everything kind of calmed down. And we put in the mechanism where you could opt out of that issue if you were a subscriber.”

There’s then some discussion of the best-selling issue, and McDonell goes on to talk about how important the issue was from a business standpoint.

“We did very well for a number of years,” he said. “Until 2012, we were making like 80 million media impressions in 24 hours. It was astounding numbers.”

This conversation’s notable from a few standpoints. First, it seems positive that McDonell at least tried to take the overall pulse of his staffers on Swimsuit, and second, it’s certainly significant that around a third of the staffers thought it wasn’t a business that SI should be in. Of course, businesses are not a democracy (and even if they were, that wouldn’t be a majority), but it’s interesting to hear that the internal opposition has reached those numbers (and that’s before you throw in the other third who didn’t love it, but were fine with it for business reasons).

None of that necessarily means SI has to get out of the swimsuit business. They’re far from the only magazine or web publication that links sex appeal with items of “men’s interest” such as sports (heck, this is largely the “men’s magazine” genre), and there’s a key business reason that many early sports blogs (maybe even inspired by SI) prominently featured scantily-clad women with no sports connections, and some still do. Sexualized content sells, and while that’s bothersome to many who don’t want it in their sports, it’s appealing to others.

Taking a stand against that by stopping the Swimsuit Issue or selling the Swimsuit brand off to someone else, or even making it more relevant to sports by restricting the Swimsuit Issue to athletes and including athletes of both genders (as competitor ESPN The Magazine does with its own Body Issue, which has its own problems but is unquestionably more related to sports), would undoubtedly please some SI employees and readers, but it likely would hurt the company from a business standpoint. However, there’s also a discussion to be had about if the flak SI takes over Swimsuit hurts them in other areas, and if it’s worth it for SI to continue aligning with Swimsuit as closely as they are.

McDonell’s eventual step of allowing subscribers to decline the Swimsuit Issue and have their subscription extended as a result seems like a positive one. That let people who weren’t interested in Swimsuit still subscribe to SI, and avoided wasted copies and unnecessary offense caused by sending that issue to people who didn’t want it. However, it certainly can be argued that perhaps he (and other SI executives) should have done more to separate Swimsuit from the magazine proper given how many staffers there were adamantly opposed to it, and a sale in particular might have been a viable option; that would have given SI the economic benefits of Swimsuit without requiring them to continue their association with it.

It’s also worth noting that this is the results of a survey from people who already worked at SI. Might there have been people who didn’t apply there because of opposition to the Swimsuit Issue, in which case SI’s decision to continue with this may have hurt its staffing? In any case, the third of SI employees who wanted SI to part ways with the Swimsuit Issue didn’t get their way. That undoubtedly has helped SI’s bottom line over the last decade-plus (although not necessarily more than a sale would have), but McDonell’s comments here also show how many SI employees have stated they’re not happy with it. We’ll see where SI goes with Swimsuit in the future, and if employees express further discontent on it.