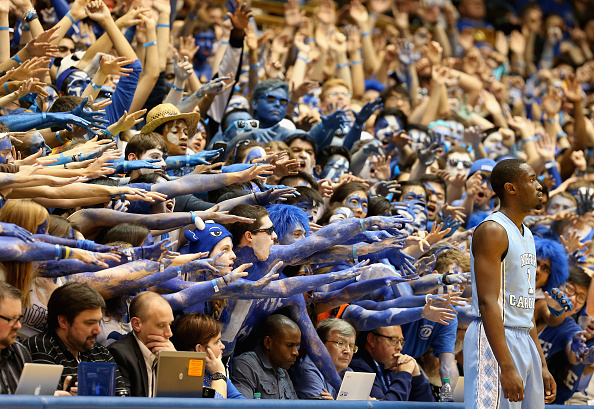 It’s not just CBS’ widely-criticized bracket selection show that took a ratings dive this year, but rather college basketball almost as a whole. Sports Business Journal‘s Austin Karp has dug into the data, and he found ratings were down almost across the board:

College basketball viewership was down during the regular season across most networks. Part of the decline can be attributed to a constant shuffle of the men’s top 10, while record figures for presidential debates on cable TV also had an impact. However, the trend for regular-season college hoops viewership has been going down for years now for several nets. CBS led all nets this season, averaging 1.47 million viewers for its weekend telecasts. That figure is down from 1.64 million viewers last season and 1.8 million viewers for the ’13-14 season. ESPN also is down again after averaging record numbers in ’13-14. The net’s men’s college hoops games drew 1.23 million viewers, down from 1.38 million viewers in ’14-15. … ESPN2 saw a sharp drop for game coverage, with viewership down to 362,000 viewers from 426,000 last season. ESPNU also had its lowest figure in years, averaging 118,000 viewers.

As Karp writes, the exceptions were WatchESPN and FS1, the latter of which helped bolster Fox overall despite a decrease on their broadcast network:

Looking at WatchESPN, the platform saw big increases across the board for its 1,800 game telecasts (average minute impressions, unique viewers, total minutes viewed). WatchESPN also had its five most-watched college hoops games this season. …Perhaps the only net to see a gain was FS1, which is up for the third straight season. The cable net averaged 109,000 viewers in ’15-16 compared to 100,000 viewers last season. However, Fox’ broadcast net averaged 639,000 viewers, down from 685,000 last year, primarily due to the net broadcasting Duke coach Mike Krzyzewski’s 1,000th win last season, which remains the net’s best hoops audience on record. Looking at combined Fox and FS1 numbers, Fox Sports averaged 163,000 viewers for its college basketball programming, up from 156,000 last season and up from 103,000 in ’13-14.

So, streaming has made some gains, and FS1 and its Big East-focused package have made some gains, but everyone else is taking some hits relative to where they were a year ago. (It’s notable that these numbers don’t include non-rated networks, which include CBS Sports Network and the various conference networks, so we don’t know how the extensive college basketball coverage at those places is faring.) However, ESPN is still dominating the college basketball landscape overall; 1.23 million viewers on average is nothing to sneeze at, and the network aired the four highest-rated regular-season games, topped by North Carolina-Duke on March 5 with 3.17 million viewers. Their ACC/Big Ten doubleheaders on Big Monday also pulled in 1.48 million viewers, up 9 per cent from 2014-15, and their Thursday night windows rose 10 per cent, so there were some selected successes for Bristol. Still, on the whole, this wasn’t a college basketball regular season to remember from a ratings standpoint. We’ll see if things are different in March Madness.