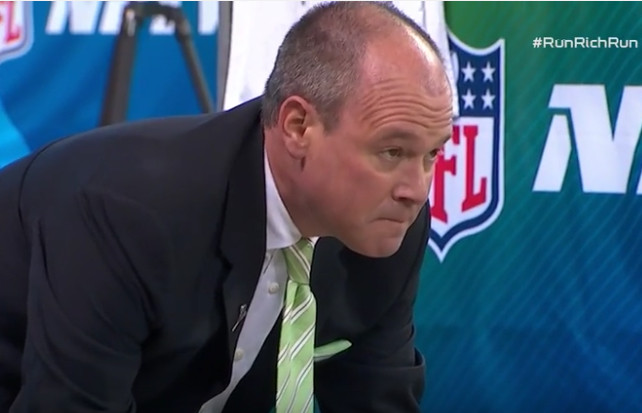 Rich Eisen probably does more running in a suit than anyone outside of Clark Kent. Since the first NFL combine NFL Network televised in 2005, he’s run the 40-yard dash every year. According to his book Total Access, this started because he was bored at the end of a long day, and decided to go run the 40 in his full suit “for you-know-whats and giggles.” It became a yearly tradition, and now it’s one benefiting charity. Shortly after posting a personal record with this year’s 5.94-second 40 Sunday, which was aired Monday on NFL Network, Eisen spoke to Awful Announcing Tuesday about how he’s raising money, how his 40 has evolved over time, and more.

AA: When did you start making your annual 40-yard dash an event for charity? When did that idea come to you?

RE: Last year, actually, was the first year. One of the people in NFL Network sponsorship reached out and asked “What do you think about adding a charitable component to this?” and that was a no-brainer.  I’m kind of embarrassed that I never thought of it myself. Her name’s Sarah Swanson, she now works in the U.K. office of the NFL, and she came up with the idea of raising money. One of the charities of the NFL is St. Jude Children’s Research Hospital, and that was clearly something that spoke to me, and St. Jude was all for it. With St. Jude being about getting kids healthy, mixing that up with the Play 60 program to keep kids healthy, playing outside, running, having me connect my 40-yard dash to it was really just a terrific idea and one that I jumped at.

AA: How does the charity component of that work?

RE: Basically, what it is is we have some corporate sponsors, some who employ me in a way, like NFL Network and DirecTV. Courtyard (by Marriott) was a very generous supporter the last two years, just to name a few. They donate money. And we encourage people to run their own 40-yard-dashes in their work clothes in their work places in a safe-for-work manner, and upload those videos to a website, nfl.com/runrichrun. There’s a donate button right there, so it’s a way to get people to a certain spot with a donate button on it, whether they’re uploading their own videos or they’re curious as to what it looks like. They see a group of firefighters in their uniforms running their 40s:

If people are curious, maybe they get there and they donate. We’re closing in right now on $200,000 right now for the charity. And St. Jude is all donation-dependent, they’re not a for-profit. And people come from all over the country and world with their sick children, and the families stay there, so there’s housing and groceries and things of that nature. Obviously that can put a tremendous financial hardship, especially when families move and stop working to be with their sick children, to make sure that families don’t ever see a bill. That’s the mission of St. Jude. You know, when I first heard about it years ago, because I’ve been part of their annual Super Bowl fundraiser, the Pat Summerall dinner, you can’t help but be impressed and really fall in love with the whole idea and the concept and the people who are behind it.  So the whole thing has really been an unexpected but natural new wrinkle to the 40-yard dash that makes it all worthwhile.

AA: How does the money you’ve raised this year compare to what you raised last year?

AA: In your book, when you talked about when you started doing the 40, it was for “you-know-whats and giggles.” Did you ever expect that it would turn into this thing that you would do every year?

RE: (Laughing) No! Good lord, no! To be honest with you, doing it in year two, three and four required some arm-twisting with NFL Network television management to provide a camera and keep it going. That actually is the truth, and I find it amazing with what the support is now. At the beginning, it was kind of like “Okay.”

The first time I did it, Terrell Davis laughed at me when I asked him, when we were bored in between shooting segments for Total Access in the RCA Dome stands, I asked him how fast I could run the 40. He laughed, and I went down and did it. Unbeknownst to me, one of the camera crew was on break, but he grabbed a camera and shot it, and I had no idea someone was in the truck recording it. They surprised me with it that night and then started replaying it for all the talent evaluators who would come on the show, you know, Mike Holmgren, Joe Gibbs, we played it for them. It was a nice, funny thing. And then the second year, I show up and Mike Holmgren says “You’re going to run it again.” I thought to myself, “You know, I’ve got to give the people what they want, if the people are Mike Holmgren.”

The next year I did it again, and they started airing it on NFL Network more often, and then one year I blew my hamstring out doing it. That was the last year I ran it in actual dress shoes. So for the last five, some-odd years, I’ve been doing it in actual running shoes to make sure I’m not really hurting myself doing it on the turf.

It probably would have been over, because it’s kind of a one-note gag if you will, but what really breathed new life into it was the simulcam technology that the NFL Network developed, where suddenly you can overlay somebody’s 40-yard dash over somebody else’s 40-yard dash. Overlaying my 40-yard dash over the actual participants at the combine was really laugh-out-loud hilarious. We’ve been doing that now for, I think, seven years, and it’s still funny every year, where you watch the guys who are faster than me run off the screen, or give me a five-yard head start and somebody who’s 325 pounds and watch that individual still beat me. Ezekiel Elliott this year gave me a four-yard head start and I actually left the screen and he comes out of nowhere and runs straight through me. It was like something out of Looney Tunes. It’s pretty funny. And thankfully there are a bunch of people who are interested, and the thankful thing about that is now it’s raising money for charity. So, I’m glad.

The players get a kick out of it. I got tweets from Chris Johnson all week. Brandon Marshall helped me train for it. There were three pieces we did for my daily Rich Eisen Show, which was great.  Patrick Peterson tweeted about it, Josh Norman, Tyrann Mathieu, and the NFL Network has now gotten all 32 teams to tweet about it and put it on their website. I really am overwhelmed. It’s pretty cool.

AA: On a more general front, how are you handling balancing The Rich Eisen Show with all your NFL Network work? What’s it like?

RE: At this time of year, it’s an easier balance. During the season, I sometimes have two-a-days on Thursday Night Football, where I do my show during the day and then Thursday Night Football at night. And then Sunday comes. Maybe between Labor Day and New Year’s Day, I had about three days off completely where nothing was going on. But I’ve got three kids at home and a wife and a rescue dog, and I’m blessed. I’m lucky to be able to have a forum, one situation where I’m setting up Hall-of-Famers to give people an idea of what they think on a television show on a network that I’ve been working on since 2003, and then another spot where a new employer has built the studios expressly for a three-hour show for me to give my thoughts on all sports, like I’m back on SportsCenter again. So I’m blessed on that front.

AA: Is there anything else you’d like to add?

RE: In terms of the all-sports thing, doing that show every day, I’m kind of enjoying getting back into that. I did that for seven years on SportsCenter, and by the way, my 20-year anniversary of my first SportsCenter is coming up in 15 days. It’s kind of crazy. I’m going to have a whole show on my show just reminiscing about it. That’s on March 16, so it will be fun.

Thanks to Rich for his time. You can follow him on Twitter and check out The Rich Eisen Show on DirecTV’s Audience Network or online, as well as his work on the NFL Network’s various programming.