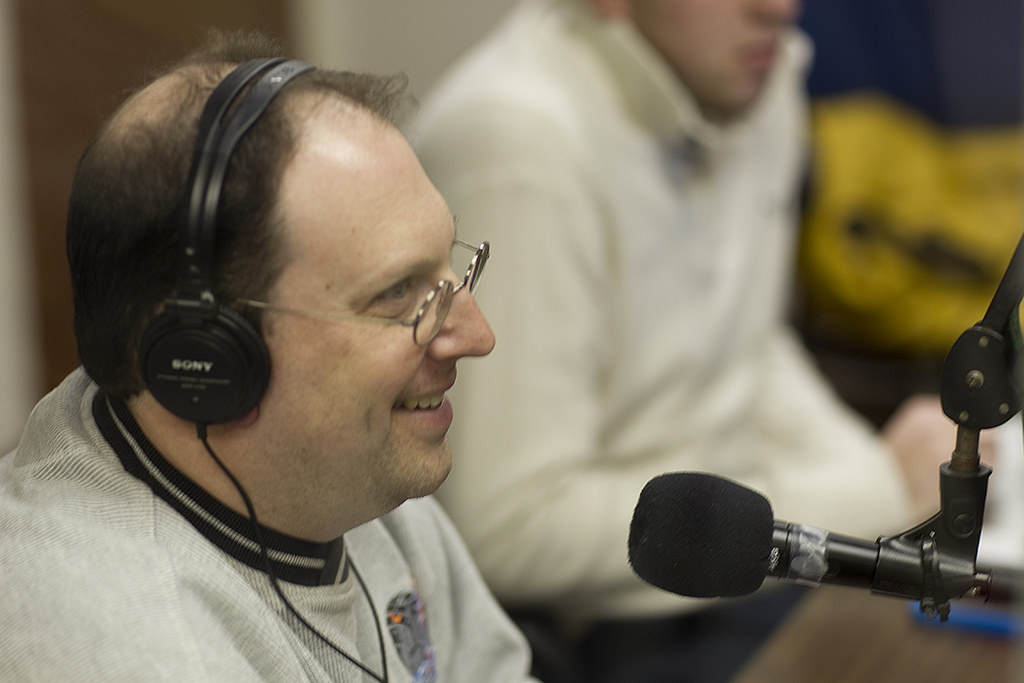 Sports media members get to experience a lot of incredible events in person, but which ones truly stand out? That’s the question Eric Mirlis goes after in his new book, “I Was There.” The book features 65 broadcasters and writers from a wide variety of career paths talking about the five top sports moments they’ve experienced live, including Joe Buck, Bob Costas, Jim Nantz and others, and it has a great mix of widely-significant moments (such as David Tyree’s helmet catch in Super Bowl XLII and Vince Young’s performance in the 2006 Rose Bowl), lesser-known moments (such as Frank Deford’s account of the 1964 Princeton-Michigan regular-season basketball clash or Joe Posnanski’s stew story from the 2000 Olympics,  and moments that resonated more for their significance to the media member (such as Michelle Beadle’s experience at the inaugural Austin Ice Bats game or Scott Ferrall’s momentous trip to Talledega.) Mirlis spoke to Awful Announcing this week about the book, why he chose to write it, and how it came together. 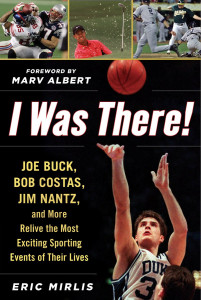 Awful Announcing: What gave you the idea for this book in the first place?

Eric Mirlis: The idea goes back to around 2005, when I was playing around with a website of my own and trying out a lot of different ideas. One of those was something I called “The List”, in which I asked a bunch of friends in the business a different “Top 5” sports topic every week. The question of “Top 5 Sports Moments Seen In Person” came up and things kind of rolled from there. It is actually a sequel of sorts to a book I wrote in 2007 called “Being There, which covered the same basic subject, with an almost completely different group of broadcasters and writers. At the end of the day, it is a topic that every sports fans sits around and talks about with friends, which makes it something everyone can relate to regardless of what you do for a living, and you can read a lot of stories in the book and compare them to your own personal experience.

AA: You mentioned in the acknowledgements that Kenny Albert was “bugging you to do this” and that his support and encouragement was critical: what interested him in the idea, and how did he help you throughout the process?

EM: Kenny and I went to college together and have been friends since then, and he was one of the people that got behind me when I did the first book (along with another college friend, Rich Ackerman). After the first one was done, he continually told me that I needed to do a second one, especially with the growth of social media. He kept telling me that “The first book came out three years too soon” because of the ways it could be promoted with Facebook and Twitter now. Once the process started, he was also very helpful as one of the main people connecting me with other broadcasters and writers and getting them to participate.

AA: How long did the book take to pull together, from idea to finished product? What was working on it like?

EM: I started getting commitments from people to participate in October, 2014, and started doing interviews not too long after that. Between interviews, transcribing and editing, the final draft was done early this year, so the whole process took almost a year and half. The best part of doing it, of course, was the opportunity to speak with so many legends of the business and have a casual conversation with each of them about their favorite moments. If you told me that I would one day have my name on the same book cover as Marv Albert, Joe Buck, Bob Costas and Jim Nantz, I never would have believed you. As for the worst part, well, anyone who has to transcribe interview will tell you how painful that process is!

AA: Your introduction mentions the variety in what respondents picked as “top sports moments,” from seminal moments in sports (Super Bowls, BCS championships, etc) to unexpected surprises like no-hitters to moments that resonate for personal reasons to moments that matter for family reasons. Did you initially expect that much variety? And how did the responses compare to what you initially expected in general?

EM: I really encouraged everyone to make their list as personal as possible. I knew there would be a lot of Super Bowls, World Series games, NCAA Tournament games and other championships, so those events were going to get plenty of mentions. What I wanted to capture was something from as many people as possible about their career, or why they got into the business, that people might not have known. Before everyone started working, they were sports fans first, and I wanted that to shine through.

AA: Who was your favorite interview for this book?

EM: I really don’t want to slight anyone with this answer, but here goes…There are 65 great storytellers in the book. That is what everyone does for a living, so being able to share these stories without the pressure of a camera or deadline, I think everyone was able to dig a little deeper into their recollections. That said, I think most people will agree that hearing Bob Costas, Jerry Izenberg or Bob Ryan tell a story is a real treat.

AA: Is there an account of one of the seminal moments that really stands out to you?

EM: I like the off-beat angle from events. One that made me laugh when I heard it was Trey Wingo talking about Super Bowl XLII and the Manning to Tyree pass. He was in the tunnel getting ready to go out onto the field for postgame interviews, so he couldn’t actually see the play and was getting play-by-play on the phone from Mark Schlereth as it happened. Without spoiling it, let’s just say the account he got didn’t exactly tell the whole story of what was going on.

AA: Is there an account of one of the other top moments (unexpected, personal, family) that really stands out to you?

EM: Again, hopefully I won’t slight anyone on this one, but I would have to pick two stories. One is Terry Gannon talking about his lifelong friendship with Rudy Ruettiger and being at the Notre Dame-Georgia Tech game that is depicted in “Rudy”. The other is Jeremy Schaap sitting in Bucky Dent’s seats for the one-game playoff at Fenway Park in 1978 when Dent hit his famous home run.

AA: What if you were on the other side of one of these interviews: what would you pick as your own top moments?

EM: A short version of my Top 5:
1. Islanders defeat Penguins on the road in OT on David Volek’s goal in Game 7 of the 1993 Division Finals
2. John Starks dunks over Michael Jordan and Horace Grant in the 1993 playoffs
3. Stephane Matteau goal to defeat Devils and advance to 1994 Stanley Cup Finals
4. Michael Jordan’s “double-nickel” in his fifth game after coming out of retirement in 1995
5. Here is my off-the-beaten-path one: Heavyweight Weightlighting competition at the 2004 Athens Olympics. The most popular athlete in Greece at the time was Pyrros Dimas, who had earlier announced he was retiring after the Olympics and ended up winning the bronze. The medal ceremony was one of the most emotional scenes I’ve ever experienced.

AA: Why should sports fans buy this book?

EM: As I mentioned earlier, it is a topic that every sports fan can relate to, and gives people a chance to compare their list to others. There are hundreds of fun stories that will cause fans to think back to their own recollections from each event they have seen, and where they were and what they were doing for others. And the stories that are told are first-person accounts from some of the greatest storytellers in sports.

AA:Is there anything else you want to add?

EM: I couldn’t do this by myself, of course. I called in a lot of favors from a lot of friends, and got a lot of help from plenty of people. It never would have all come together without that help.

Thanks to Eric for his time. You can follow him on Twitter at @themirl, learn more about the book at @IWasThereBook and buy it at your local bookstore or on Amazon.