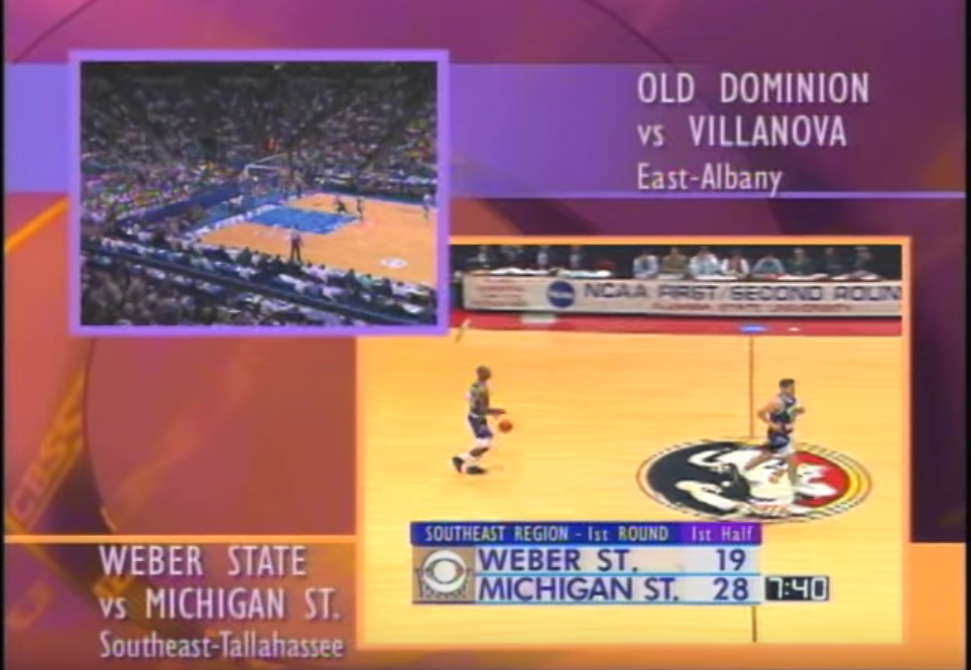 If you think about the core staple American sporing events, I submit that that no event has evolved in terms of how we watch it in my lifetime (I’m 33) than the NCAA Tournament. Give or take, how you watched events like the Super Bowl, NBA Finals, and World Series haven’t changed that much over the years. It was that line of thought that led to this tweet and some followup tweets retracing how we watched the tournament not that long ago.

It’s crazy to think that seven years ago, not all games were televised. Some carriers had overflow channels/packages but took NCAA to 2011.

What was surprising is how many replies I got lamenting missing the tourney of yesteryear, one that includes no streaming options, no Twitter, early round games not shown in their entity, and so on.

One could argue this isn't a good thing. https://t.co/O1q7WFssmf

CBS obtained the rights for the tournament from NBC starting in 1982. A few years earlier, the then fledgling ESPN landed their first major television contract that gave them the rights to air daytime games during the first round. It’s odd to imagine the NCAA tournament that had no televised daytime games on Thursday and Friday, but before ESPN that was the case. For the next decade, the tournament followed this format. Per Wikipedia, 14 out of 32 first round games were televised and ESPN could only air one game at a time with no ability to offer regional coverage.

Starting in 1991 and lasting through the 2010 tournament, CBS owned the tournament outside of the play-in-game being on ESPN in some years and various packages and additional games being offered through Yahoo, CBS Sports Network, DirecTV and other cable providers. The end result again though was that viewers saw only 8 out of 32 first round games in regional coverage, and were only offered limited coverage of other games with live look-ins and break-ins at pivotal moments.

And CBS would break at 5p to show the news while games were being played. https://t.co/TI6M4ab7yN

That’s the tournament format I grew up with. Being at school and missing out on a huge chunk of the Madness. Being home at night the first four nights of the tournament and often screaming at your television for CBS to switch to a better game. Oddly, many on Twitter nostalgically missed this broadcasting format, which is odd considering the sheer dependance on your local affiliate’s feed and the lack of choice a viewer had.

The flood of tweets to me brought up a bunch of my own memories regarding the tourney which I’ll share below retracing the viewing experience as a fan from an era that seems long ago but really wasn’t.

1995 –  My local CBS affiliate (Bay Area) decides to not show portions of a 1 vs. 16 UCLA vs. Florida International blowout instead opting for the final minute and first two overtimes of Villanova vs. Old Dominion (3 vs. 14 seed). After two overtimes, for whatever reason, CBS abandons the third and final overtime to show UCLA’s blowout. I can still recall the agony of not being able to watch the end of that game which Old Dominion would win.

@bkoo Remember being upset that CBS was sticking with a crappy game and not showing a potential upset?

2000 – Along with some fellow friends, I was in a group of students who “bought” the services of a Vice Principal of our high school for the day at the annual teacher’s auction.

My one request was for the Vice Principal to come on the PA system the final moment of every class period and give tournament score updates for those Friday games and say “these scores are brought to you by Ben Koo.” Teachers were very unhappy, but at a time where cellphones, pagers, and even internet access was not that common, this was really clutch given finding a working television on campus was impossible back then.

2004 – A roommate of mine in college shows me an advertisement in the local paper saying that Time Warner Cable will have every game this year for free (looking back I think I was unaware of the DTV pay package at this time). Rather than returning home to California for spring break, the decision is made to stay back in Ohio sheerly because of the additional games.

@bkoo I liked the old way better. It was like watching NFL Red Zone. My interest in the tournament has waned since. — Kevin Watterson (@kwatt) March 18, 2016

2006 – Still unaware of that DirecTV package available at my parents house, Comcast is now offering all the games for free on overflow channels. With Ohio State playing an early morning game while I’m on the west coast, I am forced to reconnect with an old friend who I know has his own apartment now and likely has Comcast. He tells me he has work and isn’t a big basketball fan. I tell him I will make it worth his while to take the day off. Yada yada yada, I probably spent more greasing the wheel here to watch at his apartment than I would have spent getting the package myself on DTV.

2007 – After five years in college (#victorylap) and being able to watch the first two rounds while on Spring Break as well as now having the DTV package,  I boldly propose to my new employer to submit one PTO day in exchange of two days of staying home watching basketball all day under the pretense I will email whatever is needed on both days. Awful deal for my employer.

@HellzzzBell @bkoo @awfulannouncing and invariably when they did switch, that game would go to a commercial break

The following week, I had to decline an invite to a birthday viewing party of a UCLA Sweet 16 game because Ohio State played at the same time and that house wouldn’t have the game. I got mock text messages for this choice as Ohio State went down to Tennessee by 20 points in the first half. They ended up winning in one of my most favorite tournament games ever while the lame birthday party watched a comfortable UCLA win as many complained to me the local affiliate never switched games.

2009 – While consulting at a company who was trying to make bracket challenges popular on Facebook, we are specifically told to go to some small dark corner of the office to watch basketball with a few bean bag chairs and that streaming on all of our computers at our desks will kill the office’s network. I am unhappy with the setup and don’t listen. Others don’t either. At some point the CEO and others come out of a conference room screaming about it. How did they know? Somehow the excess bandwidth killed the VOIP call quality for their call and actually somehow mixed in audio from the games into their call. It was an important call. March Madness is important too, though.

I remember signing up for CBS's VIP account just to be able to switch between games faster on MMOD. https://t.co/UPCfZuFyKY

So why do we miss an era where the Tournament was harder to watch?

I think it all boils down to nostalgia. People who replied to me on Twitter missed the live look-ins where you’d get a one minute glimpse into another game that was going on during a break in your game. If your game was dull and the crowd and announcers were just not into it, it was always a jolt to be taken somewhere else where the intensity level could be much higher. It was also oddly fun to stare at the scores of other games and wonder what the hell was going on in that game and when your local affiliate might make the switch. You’d almost try to will the change when you felt like something epic was occurring at another game.

Part of me misses the whip around https://t.co/A7VlUIiIOj

Another big thing is that more or less, we ALL watched the same March Madness experience (at least at a local level). I still remember going to elementary school and we’d immediately jump into the games we saw the previous night. In some ways, it’s almost like NBC and the Olympics in that they are controlling what you watch. You’d see crazy endings of a few games and the bulk of a few others. Our viewing experiences were the same and it was easier to talk about.

But what I think has really killed the tournament is certainly not the improvements in viewing options and social media but rather the sport itself. Ultimately the sentiment below is what we yearn for when we think of tournaments from yesteryear. From my review from of last year’s 30 for 30, I Hate Christian Laettner:

As mentioned earlier, I think the one thing that may overshadow the film to some degree is just how much this era of college basketball is missed. With superstars staying mostly for 4 years, it made for amazing television as March Madness was on steroids. We all watched intensely at LeBron’s four years with the Heat either rooting for or against him and that’s really the only thing I can compare Laettner’s time at Duke to.  Continuously through out the film, I found myself floored with the amount of big time memorable games he went through and thinking if there is anything close to an equivalent in college basketball today.

Yes, there was the Kentucky shot, but do you remember Laettner’s other tourney buzzer beater which came in OT no less? How about not one, but two Final Four or championship clashes with UNLV? Two showdowns with the Fab 5? Laettner’s Dukies even had two showdowns with Shaq and LSU.  Nowadays the majority of us (casual fans) can’t name one or two players on the majority of Top 25 teams. Back then, you knew the stars because they didn’t jump to the NBA after one year so college basketball was more or less bursting at the seams with memorable talented teams with chemistry, personality, battle scars, and rivalries. I can’t bemoan the right for young athletes to make a living if so inclined and the opportunity exists, but for me personally my biggest reason to hate Christian Laettner is that this film unintentionally put a melancholy note on what college basketball has lost.

There are certainly fun intricacies of past tournaments that we may miss but the viewing options today trump those oddly sentimental viewing habits. What we really miss is the larger than life personalities and narratives that oozed from the Madness that have eroded. Oddly you can attribute that to television as well as the allure of the pros drawing more players to the NBA instead of playing multiple years in college. The roster continuity needed to really make the tournament consistently great just isn’t there. Inevitably, when we yearn for the tournaments of yesteryear, that’s what we’re missing and not all the odd nuances that the Madness required of us.