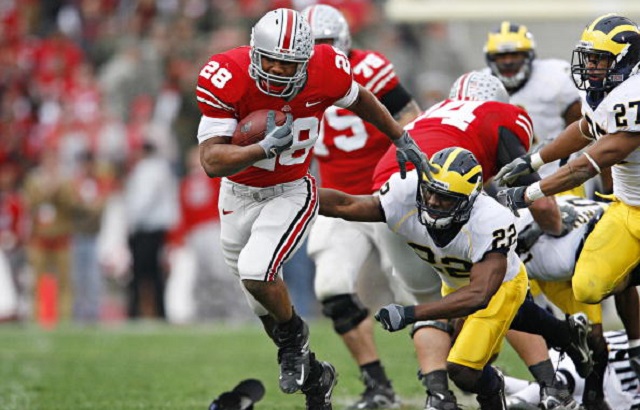 Friday, Nov. 18 will be the 10th anniversary of the game between Michigan and Ohio State. Billed as “The Game of the Century,” the matchup featured the top two teams in the country. Ohio State was ranked No. 1, while Michigan was No. 2 in the polls and the Buckeyes prevailed with a 42-39 victory. To commemorate the anniversary, the game will be the subject of a documentary to air on Big Ten Network on Monday, Nov. 21, titled The Game: 2006… Remembered.

In addition to the national title implications surrounding a game that is already renowned for the tradition and intensity of its rivalry, the 2006 Ohio State-Michigan game was also notable for other circumstances. Legendary Michigan coach Bo Schembechler passed away the day before the game, adding another layer of drama to the annual matchup. Appropriately, a portion of the documentary will be devoted to Schembechler’s death, his legacy, and the effect it had on the 2006 game.

Included among the many people interviewed for the documentary are the head coaches from the game, Ohio State’s Jim Tressel and Michigan’s Lloyd Carr. Current coaches Urban Meyer (who coached the Florida team that eventually defeated Ohio State in the BCS Championship Game) and Jim Harbaugh are part of the film as well. Notable Buckeyes involved in the documentary are quarterback Troy Smith (who won the Heisman Trophy that season) and linebacker James Laurinaitis, with linebacker LaMarr Woodley and running back Mike Hart provide the Wolverines’ point of view.

Also interviewed are former Purdue head coach Darrell Hazell, who was an assistant on Tressel’s staff in 2006, and current New Mexico head coach Bob Davie, then an analyst for the ABC telecast. Additionally, longtime Michigan equipment manager Jon Falk and sports anchor Tom Leyden, who then worked for Detroit’s WXYT (where Schembechler provided weekly college football analysis) and was one of the last people to see Schembechler on the day he passed away, contributed to the documentary.

As mentioned, The Game: 2006… Remembered will debut on Big Ten Network on Nov. 21 at 9 p.m. ET. The documentary will replay on the network several times afterwards. Here is the current schedule (all times Eastern):

In addition to the BTN telecasts, The Game: 2006… Remembered can also be streamed online or on mobile devices via the BTN2Go app.