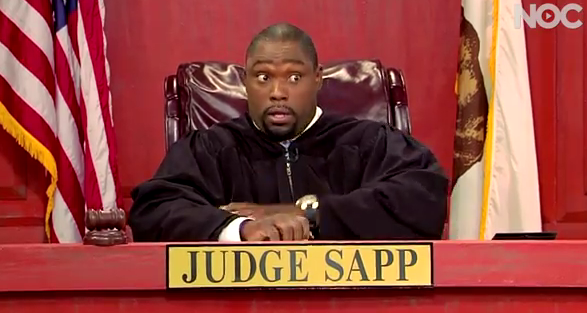 Well, it looks like Greg Anthony has some company.  In the wake of Super Bowl XLIX, TMZ Sports reports another high profile sports analyst has been arrested for soliciting a prostittue.  That analyst is none other than Warren Sapp of NFL Network.

The report comes from TMZ:

Warren Sapp was arrested in Phoenix this morning for soliciting a prostitute around 7AM  … TMZ Sports has learned.

Details surrounding the arrest are unclear — but we’re working on it.

The 42-year-old “Dancing with the Stars” alum was booked just a few minutes ago.

Sapp was in Phoenix covering the Super Bowl for the NFL Network.

It’s not Warren’s first arrest — he was busted in 2010 for domestic battery, but those charges were eventually dropped.  He was also arrested for an alleged domestic battery  in Miami in 2014.

As the TMZ report makes clear, Sapp has had his fair share of legal troubles over the years.  And yet still he’s always found a job as one of the resident loud talkers on a variety of NFL studio shows.  It remains to be seen what will happen with his position at NFL Network as this news is just breaking this afternoon.

One thing that pops out from this report though – 7 AM?!?  That must have been quite the long night in Glendale.

UPDATE: ABC 15 confirms the arrest and also says Sapp was also charged with assault.  Here’s a pic of Sapp’s mugshot.

Warren Sapp was arrested for allegedly soliciting a prostitute at 7 a.m. in Phoenix http://t.co/6HDkykiTtA pic.twitter.com/qJcVEO5S8j

UPDATE II: Sapp has been suspended indefinitely without pay by NFL Network.

Warren Sapp has been suspended indefinitely without pay from NFL Network.

The Warren Sapp suspension is pending the outcome of ongoing police investigation, per an NFL Network spokesperson.