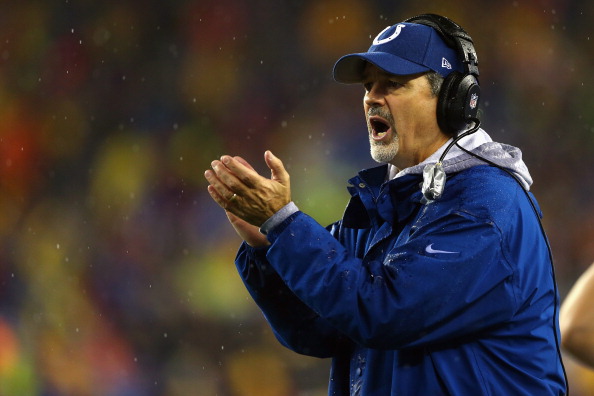 Earlier this week we chronicled the insanity of the ongoing turf war between the Boston and Indianapolis local sports media.  Thankfully, as we come upon the AFC Championship game between the Colts and the Patriots, it’s not all bad blood between the two cities.  In fact, the story of how Colts head coach Chuck Pagano reached out to the family of a Boston sports talk radio host is one of the more heartwarming ones you’ll hear in sports.

Rich Shertenlieb is the co-host of Toucher and Rich, the highly successful morning show on 98.5 The Sports Hub in Boston.  The Sports Hub has enjoyed a lengthy run of success in local ratings – for 10 straight quarters, the station has beat out controversy-plagued WEEI as the top sports station in Boston.

Rich’s wife Mary Shertenlieb has been battling the rare form of cancer that Pagano encountered, Acute Myeloid Leukemia. Even though Pagano had never met the Boston host, he e-mailed Shertenlieb a letter of encouragement for Mary after hearing of her fight that began in 2013 from NFL Network reporter and Toucher and Rich guest Albert Breer.  Pagano himself left the Colts for a period during the 2012 season in his fight with cancer, only to return and lead the team to the playoffs each of the last three seasons.  Pagano’s letter read in part as follows as excerpted from the Boston Globe:

“Don’t for one second start to think about what if?” the letter read. “Your wife has to take this AML [Acute myeloid leukemia, a rare form of cancer that starts in cells that would normally develop into different types of blood cells] head on and believe that she along with the support of family, friends, doctors, and the many more that you will come in contact with, that she will BEAT this and life will return to normal. The most important part of this process will be her FAITH. I asked God to heal me over and over again right before I fell asleep and when I awoke in the morning. There was never a doubt in my mind that I would not beat this terrible disease and return to my team and what I love to do. There are going to be some days that are ok and some that are pretty dark. With your love and support she will get through those tough times and begin to feel like she can handle just about anything that comes her way.”

The Shertenliebs were justifibly blown away by Pagano’s thoughtful and inspirational outreach:

“As soon as she woke up , I’m like, ‘Mary you’re not going to believe this, but remember that coach that I told you about for the Colts who got AML and was back on the sidelines coaching in a couple weeks? He just sent us an email.’ And so we sat there and read it together and it’s kind of one of those moments where I’m trying to hold back tears.”

Frequent listeners to 98.5 The Sports Hub became well-aware of Mary’s battle with the disease when she was diagnosed in early 2013, leading to an outpouring of support from local media, athletes, and fans.

They printed out the email and hung it on the hospital room wall adjacent to photos of their children, indicative of the power Pagano’s inspirational words could accomplish.

“When she was first diagnosed, the only thing that you wanted to hear were success stories,” Rich said. “It was just such a great gesture for him to have done that. It was about the nicest thing that anybody who has never met me or my wife could ever possibly do.”

An NFL head coach who takes the time to write to the family of a sports talk radio host he’s never met in a rival team’s city?  That’s not an every day occurrence.  The Globe headline for this story is right: Chuck Pagano makes the Colts impossible not to root for this weekend unless you’re a diehard Patriots supporter.  Even then, there might be a part of Boston sports fans that may crack a smile to see Pagano lift that trophy on Sunday given what he’s been through.  But regardless of what happens on the field in the AFC Championship game, Pagano has already had a victory that is way more important.  And now he’s using his own battle with cancer to inspire others in a very powerful and meaningful way.