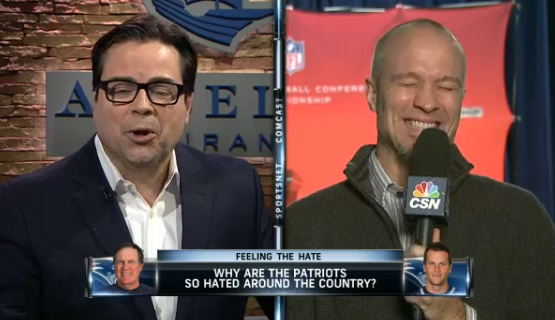 The Patriots and Colts will contest the AFC Championship Game on Sunday.  The two teams have developed a decent, yet respectful rivalry over the last decade plus, but that seems to have simmered somewhat with Peyton Manning now in Denver and Andrew Luck at the helm for the Colts.  Don’t tell that to the local media in Boston and Indianapolis though, because the two sides have been in a bloodthirsty battle that just might have to be settled in Temecula.

First it was WEEI’s Christian Fauria (a former Patriot tight end) getting owned by Dan Dakich on Indy radio after a terribly unfunny prank call.  Stooping to such lowbrow antics, and swinging and missing so badly, is another unbecoming episode after a rough year for the station.

That developed into a lengthy Twitter war between Dakich and Fauria’s midday co-hosts Lou Merloni and Tim Benz that raged on throughout the day.  There are seriously too many tweets to recap (even for us and we live for these things) but these were some of the highlights…

@LouMerloni @DaveStrole who are you and why are u bothering me?

Now @LouMerloni if I don't matter don't call and troll me..man up Louie.. say it.." I screwed up and I'm sorry".. Damn son walk like a man

@dandakich u r jabbing @LouMerloni for joking over a bat? Dont I remember your old boss bragging abt "motivating" his players w/ a bullwhip?

@cahubbard6421 @LouMerloni @dandakich after all, that's what Dan was born to do. fetch water for who ever was in charge at Indiana

WHILE ALL THAT WAS HAPPENING, Merloni got in another Twitter War with Deadspin’s Will Gordon after a post on the site that painted Merloni in a pretty unfair light.  Merloni sent a tweet joking about using a bat on protestors dangerously blocking an interstate.  That means he’s a frustrated commuter – not a violent racist.  You can criticize WEEI for a lot of things, that seems out of bounds.  The ensuing discussion got fairly heated…

.@WillGordonAgain you know me Will? You print that bullshit. You have any idea what was going on? Said? Led up to it? History? Me? Anything?

@LouMerloni No, we've never met. But you're a public figure who got real tough-guy in a public forum. You know that invites some heat.

@WillGordonAgain Real tough? Do I really think I was walking around town with a bat? U are an asshole and a hack. Joke of an article

@belovedcheech @LouMerloni Life-long, that's why I loved Lou as a player. But I didn't like his attitude today, and I have a right to say it

@WillGordonAgain @belovedcheech Will, you made me sound like a racist. How the hell do u think I feel about you? Ass

Sounds like a pretty insane day, right?  We ain’t even started yet.  Elsewhere in the very professional world that is professional sports media was another bombastic moment between representatives of the respective cities contesting the AFC Championship Game.  Gregg Doyel, formerly of CBS Sports and now working at the Indy Star, was a guest on CSN New England with Gary Tanguay and Trenni Kusnierek.  It starts off cordial, then quickly goes off the rails when Doyel professes his dislike for Bill Belichick.  It climaxes when Tanguay calls Doyel a “first rate ass” and ends with Doyel dissing Dan Shaughnessy.  Because it was about time someone dragged him into this!!!

And even that’s not all as another show on WEEI as Michael Holley went after Doyel as well after a column on SpyGate.  Doyel comparing Spygate to Belichick using unique formations to his advantage against the Ravens completely within the rules is a little far fetched.  Ok, really far fetched.  But why would you invite someone onto your show to tell them the team he covers has no chance to win the game and then berate him?  Not everyone in the Boston media acts like Tanguay or Fauria, do they?

This, ladies and gentlemen, is the sports equivalent of the epic battle in Anchorman.  I just keep waiting for Tim Robbins to show up with his pipe to chop someone’s arm off.  Maybe it happens today, who knows.  Right now I give the edge to Indy based on two things – 1) Dakich’s complete annihilation of Fauria is the best thing to come out of this by far and 2) Doyel’s random shot at Shaughnessy because, well, it’s a random shot at Shaughnessy.

I’m still left with one question though – are people in Seattle and Green Bay losing their minds over the NFC Championship like this?  Or is this just an Indy-Boston thing?