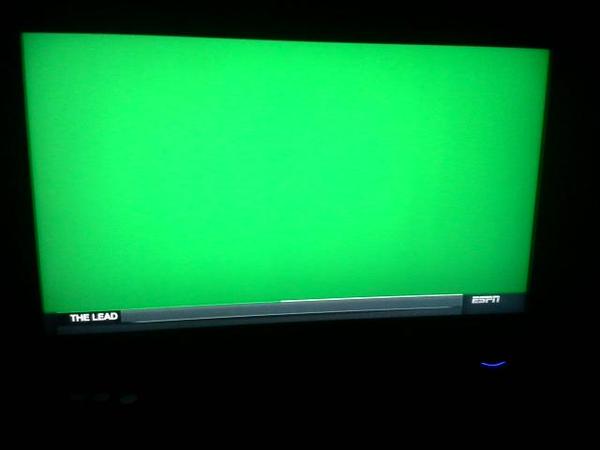 For those watching the HD feed of the Stanford vs. UCLA game Thursday night, an ill timed technical snafu occurred that left viewers without a feed to the game for almost the entirety of the first overtime. Some polling of our Twitter followers indicated the majority of those who reported the problem to be more than a minute seemed to be predominantly DirecTV subscribers although Cox, Time Warner, Uverse, and others reported lesser issues as well.

As overtime was tipping off viewers were suddenly greeted with a green screen (a shade of green that I imagine Oregon will somehow parlay into a new alternate uniform at some point soon) as seen below.

Those without DirecTV for the most part seemed to rejoin the game within a minute or so but those with DirecTV were transitioned to a technical difficulties screen for about ten more minutes.

DirecTV acknowledged the issue and tweeted to those complaining “We are aware of the issue. The SD feed is working so you might try that.” Meanwhile Skinny Arms Rob Lowe was having a good old laugh about the irony of the situation.

The game was rejoined with under ten seconds left in the first overtime thanks to a review that dragged out long enough for the issue to be resolved. Those final ten seconds saw a UCLA three pointer to take a 1 point lead, a foul shot to tie the game, and a missed foul shot for the win.

Unfortunately those with DirecTV weren’t out of the woods yet as with about 30 seconds left in the second overtime and Bill Walton midstream analyzing a replay, an impromptu promo for ESPN Full Court seemed to air out of nowhere akin to sprinklers going off in extra innings. When the promo ended, the screen stayed locked for about 90 seconds showing the phone number to call for ESPN Full Court. The game was over with a 5 point win for UCLA when DirecTV finally rejoined the game.

What’s interesting here is that some initial issue caused a hiccup for all cable/sat providers but it seemed to spiral for DirecTV and fans missed an exciting ending to a competitive game. For those who weren’t that interested in the game, who knows what Bill Walton gems we missed as he certainly had some interesting comments earlier in the game as evidenced below.