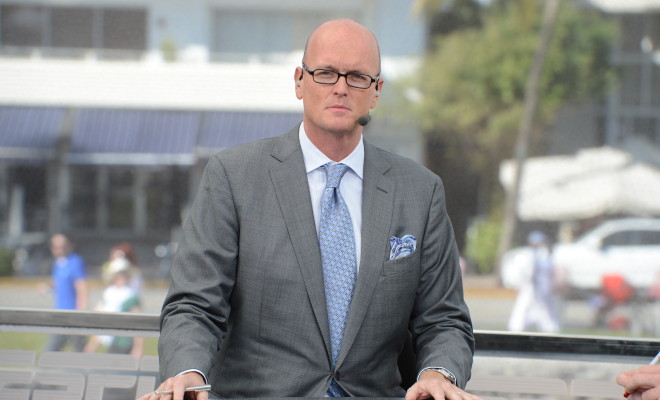 In an announcement that almost makes it worth staying up extra late on a school night, the best—if not biggest—news to come out of ESPN’s Upfront is that Scott Van Pelt has re-upped his deal with the Worldwide Leader, pegged as the new host of a midnight rendition of SportsCenter. To the ESPN MediaZone!

The midnight show will feature Van Pelt’s outgoing and authoritative personality and his signature perspective on the sports world. Popular elements of his radio show, like “One Big Thing,” will be incorporated into the hour-long telecast. Van Pelt will continue to host ESPN golf coverage in addition to other assignments but will no longer do his radio show once the midnight show begins.

“We believe Scott’s one-of-a-kind blend of intellect, humor and sports fandom will place a new, entertaining stamp on the midnight SportsCenter,” said Rob King, ESPN senior vice president, SportsCenter and News. “Placed between the 11 p.m. and 1 a.m. editions of SportsCenter, Scott will have the freedom to focus on the day’s most compelling storylines and offer his own imprint, in addition to the perspective of his assembled cast of characters.”

In other words, the midnight SportsCenter will differ from the one just before it and the one just after it in that the “center” of the show won’t be “sports” as much as SVP’s take on sports.

It’s not SportsCenter. It’s ScottCenter. SVPeltCenter? The name is a work in progress. The idea for the show, however, seems pretty smart in its nascent stages.

Look, if this show doesn’t end each night with Van Pelt sitting at a piano, tie slightly loosened while he regales the live studio audience with stories of The ‘Vous as some actress with an ABC show to promote giggles along like she gets all the old Gary Williams and Fred Funk references while a parrot pecks at his head as he—I assume the parrot is a he—updates the viewers on late-night Pac 12 basketball scores, then I don’t know what’s real anymore, Scott. I don’t even know what’s real.

Where were we? Oh, right, the house band.

@DanRubenstein It will be S/C. Just my idea of it. With @EricBandRakim as house band. The last part is not true.

The truth is, there aren’t many personalities at ESPN as un-polarizing as Van Pelt, It’s hard to find someone who doesn’t appreciate and respect the man’s work ethic, and if you’re one of those out there who just doesn’t like the guy, that probably says something about you, so you might want to have that looked at soon.

Van Pelt has proven to be something of a jack-of-all-trades for ESPN, anchoring SportsCenter, hosting his daily radio show and serving as one of their lead studio voices on the network’s golf coverage for years. When Van Pelt’s last contract was up at ESPN and rumors swirled he might test the waters elsewhere, the timing coincided with the departure of both Erin Andrews to Fox and Michelle Beadle to NBC (Beadle has since returned to ESPN).

A former ESPN executive asked me during those negotiations which of those three I’d most want to poach from the WWL and while I love Beadle’s work on TV and respect the popularity Andrews developed for herself over the years, it wasn’t even close who I would try to steal away. There’s a reason why ESPN’s competitors couldn’t do it then, and didn’t get the chance now. It’s the same reason why ESPN is locking up Van Pelt with another contract, and giving him a full hour every weeknight to be who he is. From ESPN PR:

“I was asked, ‘What would SportsCenter look like if you were in charge?’” he said. “The staff we will have in place will help answer that question daily. With the weight and resources of ESPN behind us, I know we will make this hour distinct and fun. It’s still SportsCenter, hopefully the best of what that has come to represent and definitely with our sense of what matters that day and why.”

While this is a win for those on the TV side of ESPN, fans of ESPN Radio’s SVP & Russillo will be sad to see Van Pelt leave the airwaves, taking little solace in the news that he plans to take elements from that onto the new SportsCenter venture.

If he can only get that parrot’s voice to sound as deep as Ryen Russillo, he’d have late night magic on his hands. Pure, sweet, midnight magic.