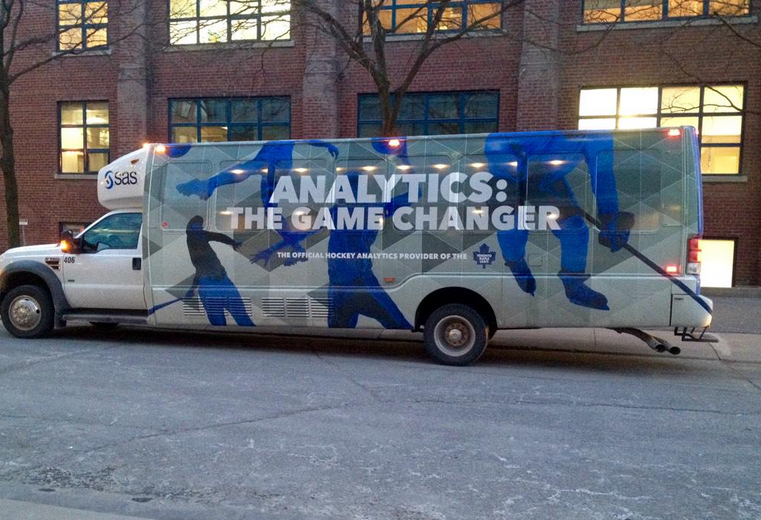 The fight over NHL analytics has already been decided, but like a certain goaltender tarnishing his legacy by playing well past his golden years, some mainstream media members just can’t let go.

The league’s official website will soon provide advanced statistics, and a new player tracking system is on the horizon. The “summer of analytics” saw a handful of teams bring on number crunchers last year. Yet, there are still some people who resist change and insist on fighting a losing battle.

MacKinnon’s column is full of perplexing passages, but let’s start with the headline: “Edmonton Oilers analytics guy remains muzzled but causes media ruckus anyway. Go figure.” MacKinnon then proceeds to take shot after shot at a man who, as he immediately establishes, isn’t permitted to defend himself.

Then there’s the column, in which the writer admittedly ignores facts to further his agenda. He’s nearly as critical of Dellow’s defenders as he is of the man himself:

But it’s not so large a leap to believe that Dellow’s close associates are functioning as his proxy when, like @blackbetty07, they take vulgar shots at journalists over harmless Twitter comments. Or when, like [MacKinnon’s Edmonton Journal colleague Jonathan] Willis, they presume to lecture the Edmonton media on how to conduct themselves.

MacKinnon doesn’t just criticize a member of his own masthead there, which would be unprofessional on its own. He also intentionally portrays Dellow’s significant other as a random Twitter user.

The other head-scratching excerpt involves a pretty obvious contradiction that comes in the form of a full disclosure admission:

To come clean, I was among his targets, sometimes deservedly, sometimes not. Far from blameless, I fired back. Things started badly and deteriorated until we both blocked each other. When Dellow was hired, I recused myself from writing about the hire in the Journal.

Announcing that he once recused himself from writing about a guy in the middle of a 2,200-word column about that person is about as hypocritical as it gets.

Now, there’s a history here. Before his hiring, Dellow was one of the Oilers’ biggest critics. For years, he used analytics to identify and demonstrate the team’s problems, doing so on social media and his now-defunct website. But he also tore into certain columnists who failed to accept the league’s evolving statistical climate.

Some veterans of the Oilers beat have been returning the favor all season, even though Dellow became a member of the organization they’re paid to cover objectively.

Another major embarrassment for Edmonton’s MSM corps came just three weeks ago, when Rob Tychkowski of the Edmonton Sun misrepresented head coach Todd Nelson’s words in a clear attempt to discredit Dellow for a decision made by the coaching staff during a shootout.

Tychowski’s colleague, fellow Sun reporter Derek Van Diest, has been trying to run Dellow out of town at every turn.

This isn’t unique to Edmonton, either. Montreal Gazette columnist Jack Todd has made his thoughts on analytics pretty clear:

"People who disagree with me are terrorists" – Jack Todd (now with screen shot) pic.twitter.com/GgyHd2Csjk

That wasn’t even the first time he compared analytics supporters to members of a terrorist organization.

Toronto Sun columnist Steve Simmons has denounced the movement for years, and more than a half-dozen examples of that have been documented over at SB Nation’s Maple Leafs blog, Pension Plan Puppets.

The league is about to start publishing Corsi, Fenwick and PDO on its website. More teams than ever employ analytics experts as consultants and high-ranking members of their front office.

Still, a small but stubborn corner of the NHL’s traditional media throng refuses to give in. The statistical revolution has been accepted in every other major professional sport in North America, but for some reason, this inexplicably influential faction of hockey’s old guard doesn’t get it.

Why is the NHL the last league to get on board? What is it about the coverage in these cities that allows ongoing resistance to a war with a clear winner and loser?

In Edmonton, they won’t let go of a grudge. In Toronto and Montreal, it reeks of the fear that statistics will render their work obsolete, and that their hunches won’t be worth a dime when they can be proven wrong in an instant. But that’s not just an apparent fear. That’s already the case.

The culture of hockey coverage in the latter locales also permits these columnists to continue using their platforms to take up their cause without repercussions, simply because their stories get clicks. But by enabling the writers to use their positions to support the defeated side, it reflects poorly on those publications and really, the industry as a whole.

The war on analytics is over, and the sooner these contrarian members of the mainstream media acknowledge that, the easier it will be to move forward. Sure, you can ignore the trolls. You can ignore analytics, too. But the sport is evolving, and if you can’t accept that, you’re in denial.