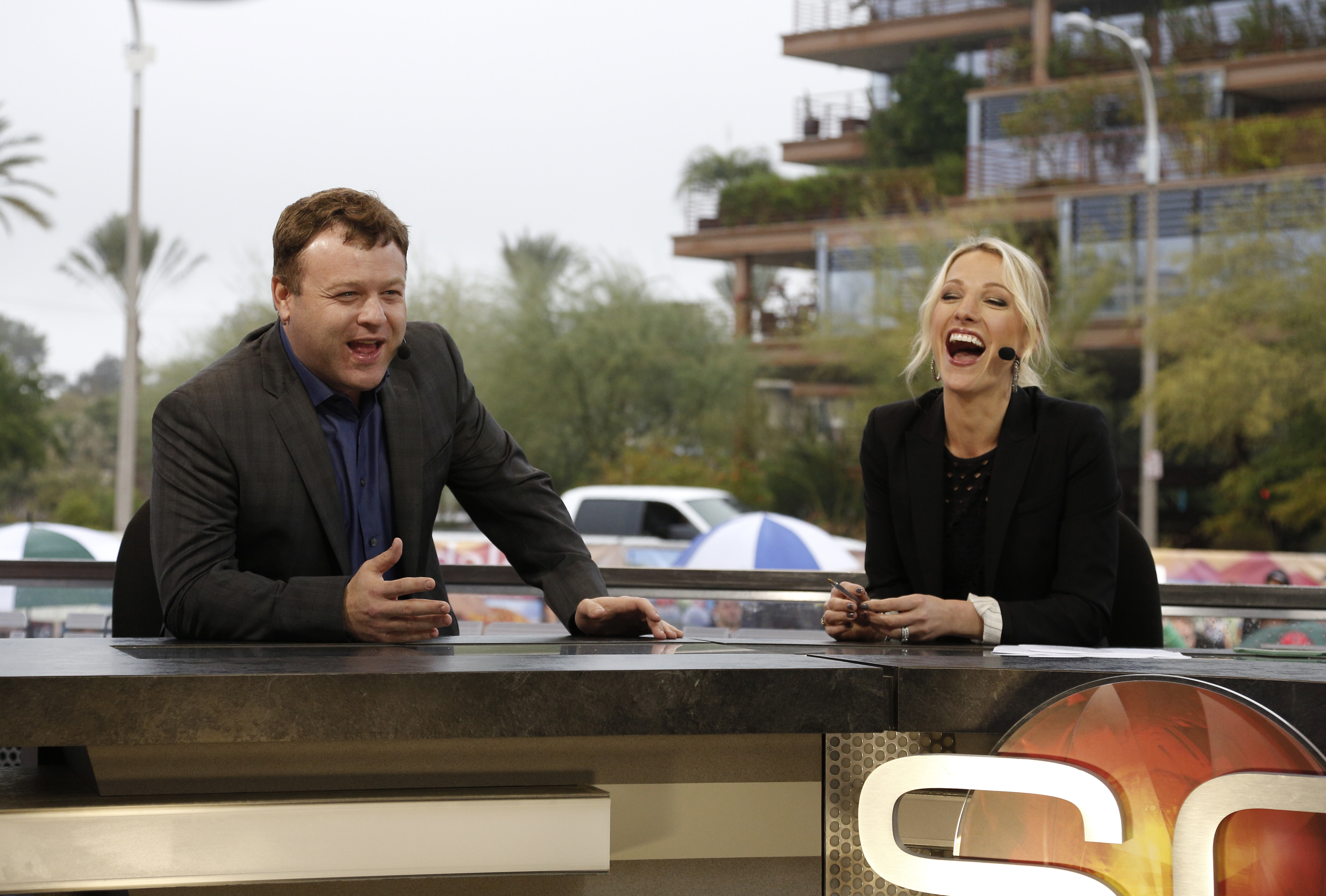 Wednesday night’s 6 PM ET edition of SportsCenter begins with anchor Lindsay Czarniak quickly running through the top three stories of the day – the breaking news of Reggie Bush’s release from the Lions, Rajon Rondo’s one game suspension in Dallas, and Derrick Rose’s latest knee surgery.  At 6:03, Czarniak interviews Nick Friedell of ESPN Chicago on the Rose injury.  By 6:15 at the end of the first segment of the program, Czarniak will have also conducted interviews with Stephen A. Smith, Mark Schlereth, Dan Dakich, and Jeff Goodman on everything ranging from Rose to NFL cuts to Kentucky’s unbeaten streak.

In the midst of all of that movement, there’s one person viewers would not see.

With John Anderson recently moving back to the 11 PM ET primetime edition of SportsCenter, ESPN’s flagship program made a subtle but significant transformation that has flown under the radar: Lindsay Czarniak would be the solo anchor of the early evening show.

It’s a testament to Czarniak’s work and the fast pace of the program that the change in philosophy has largely gone unnoticed by sports fans.  Throughout most of its history, SportsCenter has had a set of co-anchors.  From the initial pair of Lee Leonard and George Grande to storied duos like Keith Olbermann and Dan Patrick or Rich Eisen and Stuart Scott to present day partnerships like Neil Everett and Stan Verrett or Scott Van Pelt and Steve Levy, the relationship between co-anchors has been a defining quality of SportsCenter.  Czarniak had that bond with former partner Anderson.

Rob King, ESPN Senior Vice President, SportsCenter and News commented that the shift in approach at 6 PM and moving ahead with Czarniak as the lone anchor was done to both take advantage of her qualities as a sportscaster and better respond to the news of the day at the timeslot.

“The show arrives at a time of day when the very best thing we can do for fans is welcome them to an insightful discussion of the day’s biggest stories, a discussion featuring our smartest, most entertaining voices.  As an anchor, Lindsay has many strengths, but her greatest is her ability to engage reporters and analysts in lively, thoughtful conversations,” King said.

The solo anchor is not an entirely new wrinkle for SportsCenter.  Hannah Storm has done it on Sunday mornings and King remarked that newer anchors have been given the opportunity to go it alone on ESPNEWS to further examine their strengths and potential.  But it is striking to see the permanent alteration for one of the pivotal daily editions of ESPN’s most important franchise.

For Czarniak, it was a big adjustment at first.

“The first day we did it I was like, ‘oh my God I can’t breathe’ and we were 25 minutes into the show.  But it’s great.  It’s fun for me and very cool to be able to have these discussions that we’re having with the people we’ve been working with so far, who are among the most dynamic at our network,” Czarniak said.

It’s that pace that makes the 6 PM edition of SportsCenter a little more unique than its brethren at other timeslots of the day.  The new-look early evening show now has two very interesting dynamics at play simultaneously.  On the one hand, the show seems to move at a breakneck pace through the ESPN roster of analysts.  It’s not a surprise to see a dozen or more ESPN personalities to show up for an interview with Czarniak over the course of 90 minutes.  Wednesday’s show featured additional cameos from the likes of Michael Wilbon, Andy North, Tom Rinaldi, and Jalen Rose.  But at the same time, there’s a sense that the 6 PM SportsCenter is also trying to present the news in a more conversational tone with Czarniak and the full bench of analysts, insiders, and commentators having an ongoing discussion on the news of the day.

“It’s always been an interesting timeslot where you are looking back to an extent but really setting the table for people. It’s unique.  It’s not like we have all the highlights to use and people are digesting their sports news so differently now,” Czarniak said.  “For our show specifically it’s how do we satisfy the needs and desires of our viewers the most.  That way is to really set the table for them and do it quickly.  We’re strategically trying to get info to the viewer faster and hit many more topics in the first part of our show.”

It might be difficult to remember when SportsCenter was just aired a few times a day in the evening hours, predominantly as a highlights program.  Since 2008 it has become a round-the-clock presence on ESPN airwaves and focued more and more on reporting and analysis.  It began with the expansion into live daytime hours from 9 AM to 3 PM ET.  It grew even more in 2010 with live editions of SportsCenter unique to ESPNEWS.  SportsCenter became a near 24 hour live presence across the family of networks and the look and feel across the varying episodes was very similar regardless of the network or timeslot.

Now the tides are moving in the opposite direction as each edition begins to carve out its own identity.  That includes Czarniak the solo anchor at 6 PM and the adjustments in philosophy and presentation made there, the episodes emanating from Los Angeles, or even going on the road to game sites for special occasions.  SportsCenter is embarking on a time where each edition takes on more of its own unique personality throughout the day.

“A fan who tunes in at 9 in the morning has different needs and expectations than a fan who tunes in at 2 p.m. or 7 p.m. or midnight.  Our shows have to be mindful of those different needs.  A morning show must meet the needs of a fan who’s in transit, who has limited time to spend in front of a screen,” said King.  “A show during the live-game window must satisfy the fan who’s checking a score or a stat line.  And a fan on the West Coast generally comes to the show with different needs and rooting interests than a fan on the East Coast. W e’ll continue to work to differentiate our shows through content, talent and look and feel.”

Moving forward, the continued evolution of SportsCenter is never far from the minds of the people both in front of the cameras and behind the scenes.  It’s no secret that the traditional highlights show that many of us grew up watching is no more.  With highlights at the fingertips of fans at any moment, and the social media landscape continually changing the way we consume sports, even long-standing institutions like SportsCenter have to be increasingly nimble.

“I have not been in a situation except for when I was in DC and working on the Sports Machine where a show has evolved and changed when I’ve been a part of it.  It’s been a ton of hard work and the standards everyone holds on our team are really high.  And I love that.  And that’s what creates the very best show,” Czarniak said.  “There are days when we’ve been ‘wow, we really did that’ in terms of the amount of guests in our A Block and when you’re able to do something like that it’s awesome.  Big picture wise, it’s all about making sure we’re evolving and giving fans what they want.”

As far as Czarniak’s aspirations for that continued evolution in the early evening hours in taking SportsCenter in a new direction, her mission is a show that can inform and connect with viewers while joining the daily conversation sports fans are having across the country.

“I want people to come into my living room during the 6 o’clock show,” said Czarniak.  “I want them to have a beer with us.  That’s what my vision would be: to bring you up to date with the best insight on a topic, but also to do it in a conversational way where you could have that same conversation sitting in a bar.”