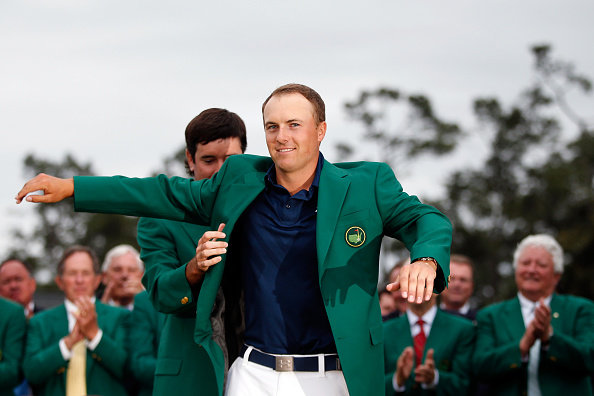 We have a serious dependency issue when it comes to talking about super important topics like THE FUTURE OF SPORTS.  We can never enjoy the present and let the future take care of itself.  No, quite the opposite, in fact.  Anyone who comes along and has even the slightest inkling of megastar potential has to be the *next* someone who came along before.  They have to live up to that mantle, that pressure, that expectation.  Why?  Because we need them to.  The delicate sporting ecosystem needs them to.  The world needs them to.

Have you ever stopped and asked for a moment – why?  Why does a great young athlete always have to be the “next” something instead of carving their own path and being “first?”  How long did basketball search for its next Michael Jordan before we finally realized that the sport would survive just fine with its first LeBron James and Kevin Durant and Anthony Davis?

The same conversation is taking place with Jordan Spieth becoming the first wire-to-wire winner at The Masters in nearly 40 years as he steps into the shadow of Tiger Woods.  There was hardly a column written in the last 24 hours that didn’t try to place Spieth’s win in some kind of Tiger-related context.

Can Jordan Spieth become the next Tiger Woods? (USA Today)

Can Jordan Spieth do for Under Armour what Tiger Woods did for Nike? (Forbes)

Yes, there are some direct comparisons to be made between the two.  Spieth’s first major victory was eerily similar to that of Tiger Woods, who golf has been flailing to create an heir to ever since he collided with that fire hydrant.  Not only was Spieth the same age as Woods was when he donned his first green jacket in 1997 (21), but he tied Tiger’s scoring record at Augusta (-18 under par).  But that doesn’t mean we have to fit every young golfer that finds success into the shoes of The Next Tiger Woods.

There’s a lot of pressure in golf and in sports media to find that person, like there was with Jordan, especially now that Tiger’s career seems to be fading into the twilight.  In 2014, the first three major championships all had horrible or record low ratings.  Spieth’s victory at Augusta led to a nice rebound in viewership numbers, providing optimism that he could be the guy to lead golf through the post-Tiger wilderness.

But before we get too carried away with anointing Jordan Spieth or dictating who he has to be in order to satisfy our demands, we all need a reality check.

There will never be a next Tiger Woods.

Woods wasn’t just a once-in-a-lifetime golfer, he was a once-in-a-millenium athlete.  Nobody but maybe Jordan, Ruth, or Ali had the same cultural impact as Woods did in the last 100 years.  Everything about him was special.  He seemed destined for greatness long before Augusta from Ed Sullivan to the US Amateur.  He could do things with a club and little white ball that nobody had ever seen before.  He attacked the golf course with a ferocity and precision that was unmatched.  His mere presence caused any would be challenger to crumble.  Jack Nicklaus once said he would win more than 10 green jackets.  Furthermore, Woods’ multiethnic background brought about a new age for golf and brought the game to scores of new fans.  And with Nike’s early marketing campaign, Woods was immediately turned into a household name.  He was a brand.  A franchise.  I mean, his name was Tiger Woods for crying out loud.  How could he not turn into a global icon?  If Jordan Spieth had a cool name like Max Power or something, maybe he’d get that treatment too.

In terms of popularity and television viewership, golf reached peaks it never saw before in the Woods Era and probably won’t see again.  Woods’ historic victory in the 1997 Masters is still the highest rated weekend in tournament history with 15.8 million viewers.  His impact on ratings, no matter the tournament, is unquestioned.  However, golf needs to take a breath and realize that Spieth, or Rory McIlroy, or someone we’ve never even heard of yet isn’t going to catch that lightning in the bottle once again.

And it’s ok that they don’t.

To be quite honest, we’re denying ourselves the chance to embrace Spieth’s victory for what it truly was by feeling the need to place some kind of metaphysical importance upon it and see it through Tiger-tinted glasses.  By always forcing the Next Tiger Woods conversation to take place, we’re robbing ourselves of the chance to enjoy the first Jordan Spieth.

Could you imagine another walk of life where you always had to live in somebody else’s prodigious shadow?  What if you went into the office and had to face the daily pressure of running the copier with the grace and skill that Bill from accounting did?  Yet we always do this with young athletes who step onto the grand stage for the first time.  Who knows what Spieth’s future will hold?  Maybe this is it for him.  Maybe he wins 20 majors and breaks all the records on the books.

Golf will be fine as long as we let it be and enjoy the ride.  The NBA hasn’t reached its television highs of the Jordan Era and it’s doing well.  Baseball has been dying for over a century and it’s still here.  So it will be when Woods finally hangs up the spikes.  But as we enjoyed the ride with Tiger, it’s worth enjoying the ride with Spieth and living in the present.  Because you know what?  There’s never going to be another Jordan Spieth.