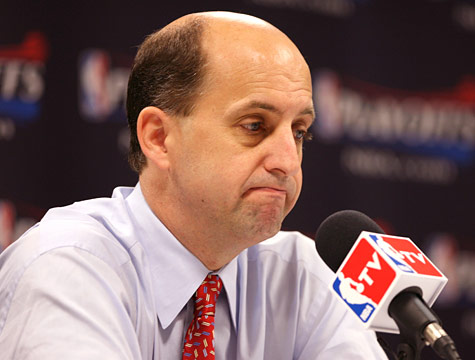 For all the talk of Charles Barkley’s rivalry with Daryl Morey and the Houston Rockets, there’s another ongoing feud between a prominent NBA franchise and a prominent NBA analyst.  Throughout the season, Jeff Van Gundy has been hyper-critical of the Chicago Bulls and their handling of head coach Tom Thibodeau.

Van Gundy accused the Bulls of trying to undermine Thibodeau through the media in spite of a decent run of sustained success in Chicago battling injuries to former MVP Derrick Rose.  Bulls exec John Paxson then blasted Van Gundy by calling his remarks “pathetic” and accusing him of having an agenda against the organization.  Thibodeau served as an assistant coach for JVG in the NBA.

Now, in a bit of a revealing turn of events, Van Gundy has said he’ll tone down his criticism of the Bulls franchise at the behest of Thibodeau’s agent.  Here’s the JVG quotes from our friend Ed Sherman at the Chicago Tribune:

“I’ve been asked by (Leon Rose of CAA, the firm that represents Thibodeau) to tone it down a bit,” Van Gundy said this week.

“He asked that I not say anything bad about (Thibodeau’s relationship with the Bulls). It was getting people upset,” Van Gundy said. “I told him I have a job to do, but at the same time, I don’t want to do anything to hurt Tom.”

“The thing I resent and the reason why I have to temper my remarks is that people equate everything I say with what Tom believes,” Van Gundy said. “Like I’m going to be his mouthpiece, which is a joke. I say what I think. He’s done a great job with the Bulls. He doesn’t need anyone defending him.”

“This is not a Tom issue,” Van Gundy said. “This is my opinion over the course of many years about how different Bulls managements have treated their coaches. I have not been a big fan.”

This is fascinating – not necessarily that Van Gundy would tone down his criticism of Bulls upper management, but that the agent of the head coach asked him to do so.  Now, it’s clear that Van Gundy and Thibodeau have a close relationship and that Van Gundy still does not appreciate how the Bulls have treated their coaches through the years… but is it right for a coach’s agent to impact the way an analyst shares his opinion?  Should Van Gundy back down at the recommendation of the person he’s trying to be an advocate for, or should he push ahead because he feels it’s the right thing to do?

That conflict is seen when Van Gundy says he has a job to do, but he doesn’t want his job to have a negative impact on Thibodeau’s.  Van Gundy has to continue to serve viewers and be honest and do the job that ESPN calls him to do, but if his comments are having a tangible impact on Thibodeau’s negotations with the franchise, perhaps now is the right time to take a step back.  And maybe that is the proper perspective on where the line is for a television analyst.