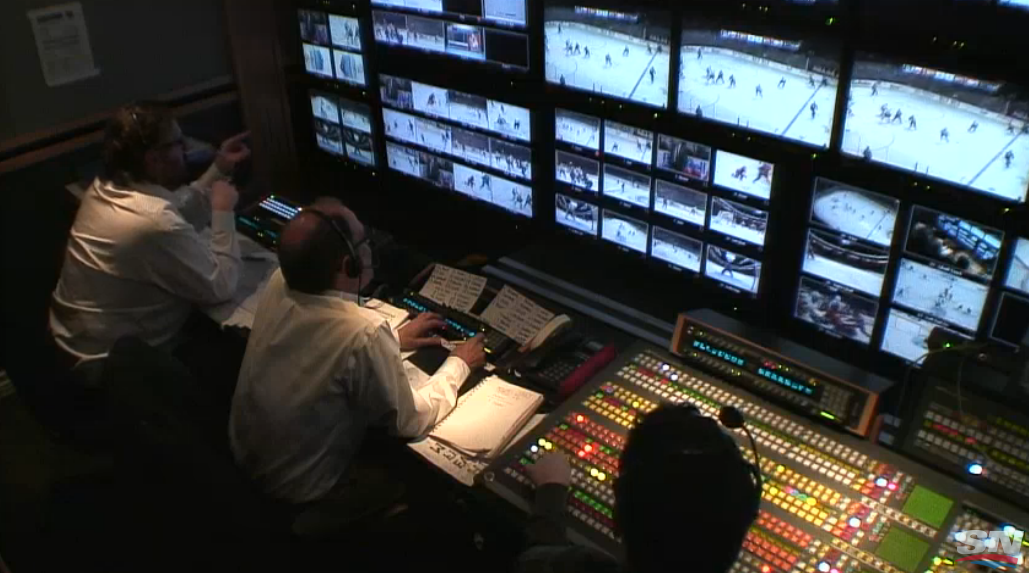 Rogers Communications will remain in the spotlight all season, but the new Hockey Night in Canada rightsholder peeled back the curtain on Saturday night.

The result was must-see-TV, only a bit more meta.

Sportsnet set up a camera inside the control room and live-streamed the production of Saturday’s game between the New York Islanders and the Montreal Canadiens on the station’s website.

Full disclosure: I worked for Rogers on the radio side until the summer of 2013. I work elsewhere now.

“Oh my god,” Askin said into his headset. “He’s having to force it now.”

Right away, it was clear this would be compelling. In addition to 10 goals scored in an eventual 6-4 Canadiens victory, there were fights, controversial penalties, a goal review and a goaltending change, which all produced memorable reactions from the crew.

More than anything, it emphasized the skill required by the producer and technical director to monitor multiple live shots and replays, communicate with multiple crew members, and pay close attention to the actual details of the game.

The live stream was also great PR, and there was really nothing to lose. It was entertaining, presumably inexpensive to pull off, and it showed some transparency.

In the unpredictable world of live TV, it could have been a disaster, but that was a risk worth taking considering the medium. You can get away with a lot more on the internet than you can on cable TV. That’s why this was a no-brainer.

In the end, nothing particularly controversial happened in the control room. Askin scolded a VTR operator for giving him a replay in slo-mo instead of regular speed, but the producer was mostly complimentary to his staff. He also showed a sense of humor, shamelessly praising his wife’s chorus group to his co-workers during the anthems.

Streaming the control room feed couldn’t have done much to improve the show’s inconsistent ratings, but it was another example of Rogers not being afraid to try new things, whether it be a camera on the referee’s helmet or inside the production truck.

Here’s hoping the experiment wasn’t a one-off, because it was captivating to watch and it gave viewers a real, raw look behind the scenes.