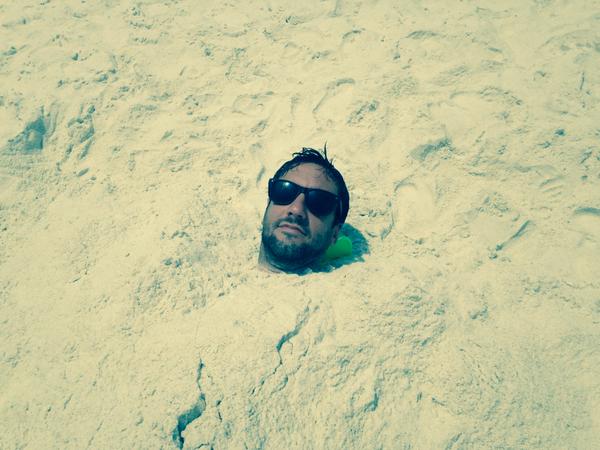 Clay Travis gets paid for his opinion. It’s a great job if you can get it, and the louder and more ridiculous your opinions are—really, the more attention you can get for those loud and ridiculous opinions—the more famous you will become.

Offend people enough and you’ll be out of a job. But offend people just the right amount to get them talking about you and you can have a very long and successful career.

Someone will always hire the jerk, if for nothing else than to put him in the virtual dunk tank and let the viewing, reading and listening public keep on tossing. Skip Bayless has mastered that gambit, literally sitting in a chair while others take shots at him day after day, utterly unfazed by the vitriol thrown his way. His cohort Stephen A. Smith is similar in a different way, doing a lot more barking at the carnival than Bayless ever does, with the same result nonetheless.

Travis is a different animal, and certainly not as good at this game as the “First Take” duo are at getting attention, but he’s still pretty damn good, and good enough that Fox wants to bring all of his multimedia talents under their umbrella, even in the same week when they cut jobs at their own newsdesk.

It’s hilarious to see how perception changes reality in situation like this. At ESPN, Bayless and Smith are a black eye for the brand, with countless people inside the company—both on air talent and those behind the cameras—embarrassed to work at the same place that produces “First Take.” At Fox, however, we’ve come to expect that kind of show, and there may not be a guy better than Travis to pull it off for them.

Let’s remember that Fox’s first big regional hit before they even had a cable network was “The Best Damn Sports Show, Period,” which was certainly not the “best” show, but probably the “best damn” show that network ever had.

Fox Sports’ big hire when ESPN had contracts up and Fox needed to make a splash for FS1’s launch was Erin Andrews, who, ironically enough, worked with Travis on a college football show nobody watched but everybody seemed to talk about each week. How did that work out? Andrews is essentially back to being a sideline reporter for Fox while hosting a dancing show on another network, but Fox wanted the splash—the attention—over focusing on the overall quality of programming at the network.

Fox’s other other big hire for FS1? Regis. How did THAT work out? Recently, Fox hired Pete Rose, because they know people would love to hear from Pete Rose, even if he pisses people off. Especially so.

Why Clay Travis is wrong about the Confederate flag: http://t.co/zYzTu92bAD

Even outside of sports, Fox has always been the same. It is a network that exists on our television dial because a tiny cartoon on Tracey Ullman’s sketch comedy show got super popular, at the same time America fell in love with Al Bundy putting his hand in his pants while random ladies with giant hair and tube tops paraded into the shot.

We’re a nation of Bud Bundys, and Travis is Fox Sports’ latest poster boy for that mentality.

And, really, that’s okay. Fox has never been anything but what it is, and sometimes it’s awesome—Arrested Development or Brooklyn Nine-Nine—and other time’s it’s…”Paradise Island” or Gordon Ramsay yelling at a bunch of fry cooks about undercooked Wellington. Mostly it’s that.

People can wring their hands about Fox giving Travis a deal to take over his corner of the media world, but he’s just keeping the chair in the dunk tank warm for the next person. Whitlock was their one big name for how long? When he went to ESPN he became more of a lightning rod than he ever was at Fox, simply because of the more professional perception at ESPN. When the Worldwide Leader threw The Undefeated his way, which turned into a debacle they’re still trying to figure out, the Whitlock experiment seemed even more peculiar. At Fox he was… perfect. Unabashedly brazen, truth to power, yada yada yada, and it was everything Fox needed. Travis, in a very different way, is totally that.

@DanWetzel I’m fine with “asshole” too.

Fox’s lead news breaker is Jay Glazer, the media insider who openly trains and conducts other business with the athletes he covers without any specter of journalistic impropriety. And let’s not forget Fox Sports re-launched its website around 2009 with a scripted show where they literally had topless women on in an office setting during lunchtime.

From SportsBusiness Journal in 2009:

The plan courted controversy during its first week when the show “Cubed” launched with video of naked women and crude discussions that lampooned the WNBA. A few hours after posting its initial episode, Fox deleted all nudity and the WNBA discussion from the show.

[Fox sports chairman David] Hill defended the show, saying the initial episode suffered through “creative hiccups.” He said, “I’m most pleased with ‘Cubed.’ It’s a brand-new form of talk show. We reversed it. The audience is eavesdropping on the talent.”

Creative hiccups or uncreative C-cups, David? (Yes I’ve been waiting six years to make that joke.) And that was the show Hill was MOST pleased with. (Note: maybe a little NSFW video.)

That’s why Travis is a perfect fit for Fox.

Travis is their base. If ESPN did something like this, I think the Travis deal would be an actual story. I’m wondering why we even feed the beast by mentioning this, but we cover the media and that’s what Fox, in parts, is. Is Clay Travis big enough that we even have to tip our cap to them? He is, so we do. And Fox wins.

Big day for us gays.

We had internal discussions over this topic and I was surprised at how heated it became. Usually I’m the hot-tempered one with our Midwest and Canadian friends much more mild mannered and reasoned when news like this gets out (the guys out West are about as cantankerous as me, to be fair). I was probably the least worked up about this, and when the comparison to ESPN and “First Take” came up, I realized we weren’t talking about the same sports media concept at all.

Analogy time: if you have two kids and one is mature and responsible and the other is a terrible monster, you always get more upset when the responsible kid accidentally draws on the wall than if the monster kicks a hole in it.

ESPN is the mature one, and Fox’s walls are full of holes. (Note: I don’t know what that makes NBC and CBS, but now I can’t stop thinking about it.)

Shows like “First Take”, and to a lesser, but often more damaging, extent, “The Herd” on ESPN Radio with Colin Cowherd, are the scribble on the wall ESPN refuses to paint over. It makes many of us irate that ESPN stoops to that level for attention. At Fox, we assume they just can’t help themselves.

So, in a way, that almost makes the case that what ESPN does is worse. They know better and don’t care. I have half a mind to believe Fox honestly doesn’t know better, and certainly cares even less. And that works for them.

Just so you know @JustinColeMoore I am fucking fantastic at baiting hooks. Just caught your ass.

At ESPN there are dozens of programs to counterbalance for the likes of Bayless, Cowherd and Smith. Fox doesn’t have much counterbalance at all. Katie Nolan? Could you imagine Nolan’s “Garbage Time” as a lead-in to a Travis-led show? You’re welcome for the idea, Fox, but I’m sure you already had it.

Almost all of Fox’s studio shows on FS1 and certainly on their NFL on Fox flagship offering are yukfests with a little sports sprinkled in. Joe Buck is one of the only high-profile people at Fox who doesn’t play the lowest common denominator card, and everyone seems to hate him. Rob Stone adds some much needed professionalism to Fox’s studio shows, but he has almost zero national profile outside of us soccer fans. Besides, whatever professionalism Stone has is negated by putting him on the set with Eric Wynalda and Alexi Lalas all the time! (Love you, Alexi. Eric… I acknowledge you also exist.)

That’s not to say Fox doesn’t have a lot of good writers and analysts both online and on TV. They do, but it’s not news when most of them write a story or contribute to one of their shows. They are not going to get people talking like  Travis can, and that’s why this is a big deal.

That’s why Fox loves the guy.

Travis figured out a long time ago what some of us refuse to admit, and that’s the real lesson here. Be more of a jerk. It might be the only way to survive.