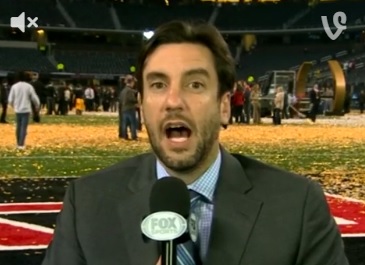 Prepare for a lot more of Skip Bayless Lite on Fox Sports 1.

According to the Tennessean, lightning rod and contrarian Clay Travis will sign a new contract with Fox Sports that will see his presence increase across their spectrum of television, radio, and web platforms.  The paper notes that Travis will be taking his “sports media brand” to Fox in its entirety with the new deal.  (It must be nice to be big enough to move on from mere personhood to becoming a “sports media brand.”)

Travis first joined Fox Sports in 2013 with his website Outkick the Coverage coming along for the ride as well.  He was his usually reserved self when commenting on the matter:

Clay Travis has inked a deal to take his entire sports media brand under one umbrella with Fox Sports.

Travis signed a multi-year deal to continue licensing his Outkick the Coverage website to Fox.

The Nashville native and Vanderbilt law school graduate has also signed an agreement that will increase his television presence on Fox Sports 1. The details on Travis’ television, radio and podcast roles will be released in the coming weeks.

Travis left his role with 104.5 The Zone last year after he was unable to reach a contract extension with the sports talk station’s parent company Cumulus.

“I’m excited to bring everything under one roof,” Travis said. “And my goal is nothing less than world domination.”

Earlier this year, we wrote extensively about Travis’ contract being up and the decision facing Fox given the many controversies his work has generated since linking up with the Los Angeles based network and asked whether the network could withstand them.  (See here, here, and here for just a few examples.)  The answer is an apparent, if not unsurprising and enthusiastic yes.*

* It is worth noting that after our article was published documenting the various kerfuffles generated by Travis and OKTC and Fox’s reaction to them that Fox Sports no longer labels Travis’ Outkick the Coverage vertical as “the official college football blog of FoxSports.com.”

This is just another reminder that sports media these days is not about quality or quantity of work, it’s most of all about drawing a reaction.  Love him or hate him, turn up your nose at what he represents for the trajectory of the industry, or grumble about how it’s another sign that trolling is the quickest pathway to the top, Travis draws a reaction.  Whether he writes about boob rankings or how dumb he thinks your fanbase is or why the confederate flag is getting a bad rap, he gets you to click.  Call it the Baylessization of sports media or what have you, but Travis has found a way to make it work for him.

So take a deep breath and get ready for many more of Travis’ polarizing takes and many more times of being reminded that he was once a lawyer that one time.