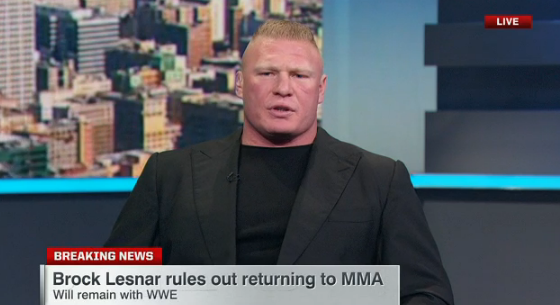 WWE World Heavyweight Champion Brock Lesnar announced on SportsCenter that he would be re-signing with the professional wrestling organization instead of returning to UFC.  Lesnar made the reveal in an exclusive interview with ESPN personality and noted WWE fan Michelle Beadle.

If only this were held at a local Boys and Girls Club and had weeks and weeks of hype, it could have rivaled The Decision as the biggest free agent decision of our time.

The real life storyline of Lesnar’s contract situation with WWE was perhaps the most interesting subplot entering this Sunday’s WrestleMania as he faces Royal Rumble winner Roman Reigns for the title.  With Lesnar now sticking around WWE after WrestleMania, it certainly opens up the creative options for the company for the WrestleMania main event as some fans have not really taken to Reigns as the presumptive triumphant successor to Lesnar.

There’s another facet to this story that is fascinating beyond WWE re-signing one of its top stars – the fact that WWE’s top star announced his re-signing with the company on SportsCenter.  Not on Raw, not on WWE Network, and not on WWE.com.  On the self-proclaimed worldwide leader in sports.

ESPN is not the place you expect to see WWE coverage.  It’s not like the late night SportsCenter is running down the results of Raw and Smackdown every week.  (Although it’s fun to imagine a world in which SportsCenter would cover WWE nightly and Hacksaw Jim Duggan becomes the next Barry Melrose.)  We’re a long way down the road from the days Ric Flair and Terry Funk were battling it in out in wild brawls for the NWA championship and Jim Ross would be selling it as the best competition in sports.  It’s been almost two decades since the industry pulled the curtain back and embraced the entertainment qualities of its scripted programming.

Even though WWE is firmly entrenched in the entertainment sector though, there has always been and will always be crossover into the sports world due to the athletic, combative nature of pro wrestling.  And in what is perhaps an ironic and intriguing trend, the sports world has embraced WWE more and more in the last year in spite of its entertainment identity.

Let’s face it – the sports world and WWE attracts much of the same audience.  And in Lesnar’s case, it’s extremely relevant for SportsCenter to cover as a news story because there’s a massive sporting tie-in given Lesnar’s other option was to return to the UFC.  As a former UFC champ and one of the legit top athletes on the planet, Lesnar’s decision to remain in WWE has a significant impact on the sports world.

Lesnar’s announcement on SportsCenter is actually just another step in WWE’s push into mainstream sports, though.  Think of all the connections between WWE and ESPN in just the last week to promote WrestleMania – Jon Gruden shoots a video for WWE.com previewing the Andre the Giant Battle Royal, Bill Simmons appears as a guest commentator on Raw, Roman Reigns and Paul Heyman show up on SportsNation, and Lesnar makes his big announcement on SportsCenter.

Additionally, several sports websites and blogs have begun to cover WWE more regularly including Deadspin, Grantland, For the Win, and this very website, especially when it comes to the revolutionary WWE Network.  Fox Sports took it a step further and hired Jim Ross as a writer and commentator.  And in May, E:60 will air a special one hour documentary entitled “WWE: Behind the Curtain.”

It’s smart for WWE to take advantage of any mainstream sports coverage they can get.  It’s a terrific way to gain new fans and market the current product.  And truth be told, it’s a boost for WWE that several top sports personalities like Simmons and Beadle are unapologetic fans of pro wrestling.  Sure, there will always be snobbish individuals like Colin Cowherd who look down upon pro wrestling fans, but honestly, who cares what they think?  It’s 2015 and thankfully our society has moved beyond trying to impress the Cowherds of the world.  ESPN is not going to start covering WWE like it’s Major League Baseball anytime soon.  But featuring the athletes that perform (including scores of wrestlers with backgrounds in sports) and having fun with the entertainment aspects of WWE presents a winning scenario for both.  As much as WWE can reach new fans by linking together with ESPN and other mainstream sports companies, those networks can reach new WWE fans as well who might not normally tune in to SportsNation or E:60.

If ESPN thinks Brock Lesnar’s re-signing with WWE is a big enough story for live SportsCenter coverage, why can’t WWE continue their push into mainstream sports?