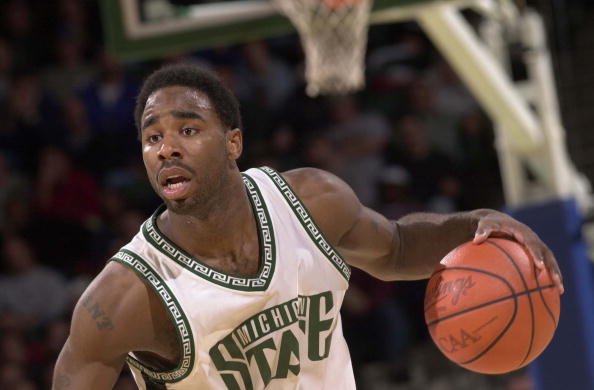 It’s certainly startling news considering Cleaves’ popularity during his championship run with the Spartans fifteen years ago and beyond.  After a brief career in the NBA, Cleaves has moved into limited television work both nationally and locally in Michigan.  No charges have been filed and very little is known publicly about the allegations or the case at this time as it appears to be in the very early stages.

Former Michigan State basketball star Mateen Cleaves is being investigated for his role in an alleged sexual assault in Genesee County, according to prosecutors.

Maria Miller, director of communications for the Wayne County Prosecutor’s Office, confirmed Friday, Oct. 23, that her staff was transferred a case from Genesee County investigating Cleaves for a possible sexual assault.

Details of the allegations have not been released and Miller said the case remains under investigation.

There is no timeline on the investigation, Miller said.

Frank J. Manley, a Flint-based attorney for Cleaves, said he was aware of the complaint and asked people reserve judgment on Cleaves.

Cleaves joined CBS Sports Network in 2012 and works as a studio analyst for Inside College Basketball on the network.  He worked the NCAA Tournament last year with CBS and Turner, even announcing the Michigan State Team Stream telecast with Brian Anderson during the Final Four.

It’s the second time this year that a CBS Sports college basketball analyst has had an encounter with the authorities as Greg Anthony was arrested for soliciting a prostitute back in January.