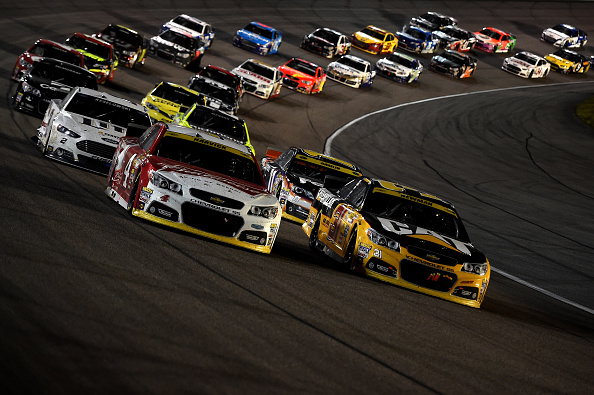 Instead of having three networks dividing the Sprint Cup series and one (ESPN) taking the entire Nationwide now Xfinity series, Fox and NBC will split both series as Fox takes the first five months of the NASCAR calendar and NBC will do the second half. And while Fox will carry 10 Sprint Cup Series races, Fox Sports 1 has 6 and in the second half, NBC will carry 7 including the last three of the season while NBCSN will have 13 races.

In the Xfinity series, Fox/Fox Sports 1 will carry 14 races with just two on the Fox Mothership and NBC/NBCSN carries 19 with four on NBC.

So the cable networks will have a heavy presence with NASCAR. Will they be able to replace the presence of ESPN which had the rights to 17 Sprint Cup races and the entire Nationwide Series?

When IndyCar went to Versus/NBCSN in 2009 after having ESPN as its primary rightsholder, races experienced a huge ratings drop, averaging 315,000 viewers in its first season after receiving 778,000 in 2008 on ESPN/ESPN2. While 2014 on NBCSN was IndyCar’s best season to date on the network, 2014’s average of 378,000 viewers pales in comparison to its last season on the Worldwide Leader.

The problem for NASCAR is falling ratings. Since 2004, its last ten races of the season have fallen from an average high of 4.7 on NBC/TNT to 2.7 last year on ESPN. NASCAR’s ratings have been steadily slipping and have been losing the 18-49 demographic. Now as NBC re-enters NASCAR after an eight-year absence, it hopes to buck the trend and also bring new viewers to the sport.

Also, Fox Sports 1 which has been struggling with the Big East this winter is hoping with new properties coming into the fold this year such as MLS, NASCAR, U.S. Open, Women’s World Cup plus the MLB American League Division Series and League Championship Series, it will increase its profile and thus its viewership.

Fox is also hoping that bringing current racers such as defending Sprint Cup Champion Kevin Harvick, Danica Patrick, Brad Keselowski and Jeff Gordon as analysts for 10 Xfinity Series will attract viewers to the races as well.

Fox and NBC will work together during this ten year contract to promote the sport as well as co-producing races throughout the season, something ESPN, Fox and TNT did not do from 2007-14. Here’s the promo both networks ran leading up to this season.

Fox and NBC come into the new NASCAR season as partners hoping that their investment will be returned with higher viewership and increased profiles for their cable sports networks. Both companies are saying the right things now about their NASCAR relationship. We’ll see if this TV marriage for the sport can continue beyond 2024.