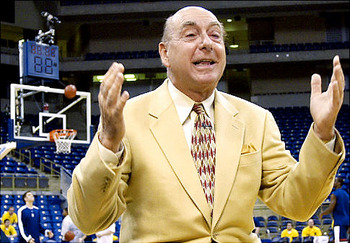 The North Carolina-Duke rivalry lived up to all the hype on Wednesday night.  Duke came from behind to win 92-90 in overtime.  The game featured breathtaking, lightning-fast action, highlight reel plays, lead change after lead change… basically everything college basketball hasn’t been able to produce consistently the last several years.  The sport has faced criticism over a style of basketball that is not aesthetically pleasing with controlling coaches and more stops and starts than a Los Angeles freeway.  Carolina and Duke showed it doesn’t have to be that way.

This edition of the Tobacco Road rivalry was also notable for what was happening in the broadcast booth.  In what developed into the biggest sports media story of the week, Dick Vitale was absent from the game as Jay Bilas rode solo with Dan Shulman.  It represented the closest thing to ESPN officially passing the torch from the Vitale Era to the Bilas Era in their college basketball coverage.

Vitale’s commentary has become increasingly polarizing in the later years of his career.  Like anyone who sticks around for so long on the national stage, eventually there’s going to be a section of the population that grows weary of hearing the same schtick for multiple decades, especially for such a big personality.  (See Berman, Chris.)  But love or hate Vitale’s commentary, there’s no questioning that he’s been the best ambassador for college basketball that any sport has had for the last 30 years.  And with his infectious positivity and charity work, even if you don’t like his commentary he’s one of the more likable personalities in sports media.  Seeing him tweet his thoughts during the game made you wish he was there at Cameron:

It has been an honor to be part of every UNC-DUKE game on ESPN-35 yr streak ends-Can't hide it I will mill miss it http://t.co/C8VOI7QfEm

I must admit I am eating my heart out not being part of this gr8 rivalry / guess U might say I got addicted to it !

How did Vitale’s absence affect the game broadcast?  It gave Jay Bilas a chance to shine in the #1 analyst role and he delivered in every way.  If Bilas isn’t in the Top 5 of analysts in sports today then there’s something terribly amiss.  (Wait a minute, I guess we’d be the ones to do those rankings, so let’s just call him a Top 5 analyst.)  Very few people can break down a game and tell viewers what they should be watching with clarity like Bilas.  Most significantly, he presents a critical edge (perhaps channeling his famous Twitter page) that’s refreshing to hear in college basketball.  If there’s one criticism of Vitale’s announcing (and other college basketball analysts), it’s a lack of criticism, especially when it comes to coaches.  Bilas’ partnership with the always excellent Dan Shulman was the performance of a true #1 broadcast crew.

But something was missing.

It was a great game… and a great broadcast… but still, something was missing.

That something was Dick Vitale.

And that’s what remains a bit confusing about this entire story.  There’s really no reason why ESPN couldn’t have had Vitale join Bilas and Shulman for a three man booth.  That’s been the setup for the Carolina-Duke game in recent seasons and could have been this season.  But it seems that for whatever reason ESPN wanted to put a stamp on the fact the network is moving on.  In doing so, they sacrificed that intangible ingredient that could have made Carolina-Duke all the more special.  Because if there was ever a game meant for Dick Vitale’s histrionics, it was last night.

It’s quite similar to what we experienced during college football season.  Chris Fowler grew into the role of #1 play by play man and delivered a great call in the national title game.  But we still missed Brent Musburger.

ESPN made the right decision in making the transition from Dick Vitale to Jay Bilas as their #1 college basketball analyst.  Like Fowler, Bilas got the promotion in signing a long term contract extension with the network.  Bilas is the best analyst ESPN has and deserves the top spot while Vitale can still be a major part of the network’s coverage.  In retrospect though, that role for Vitale should have involved last night’s game.  Vitale deserves to be there to join Shulman and Bilas once again for the rematch in Chapel Hill on March 7th.