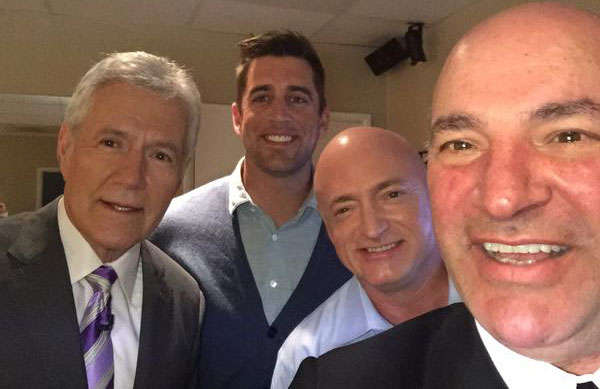 Green Bay Packers quarterback Aaron Rodgers isn’t just the highest-rated passer in NFL history and the league’s reigning MVP, but he’s also funny. And smart. Funny enough that I’d imagine he’d be a hit on Saturday Night Live’s “Celebrity Jeopardy,” but smart enough that I wouldn’t be surprised if he held his own with the real Alex Trebek.

That’ll come to fruition, because a tweet this week from Shark Tank’s Kevin O’Leary revealed that Rodgers, O’Leary and retired astronaut Mark Kelly taped an episode of “Celebrity Jeopardy!,” which will air on May 12.

Ok contest time. Who can name the other 2 contestants, host and name of this iconic game show? Watch May 12! pic.twitter.com/UfNLLrUAnM

Rodgers has apparently been a longtime fan of the question and answer show. Past “Celebrity Jeopardy!” contestants from the sports world include Mike Piazza, Al Michaels, Jim Lampley, Reggie Jackson, Greg Gumbel, Kareem Abdul-Jabbar, Reggie White, Charles Barkley, Martina Navratilova and Curt Schilling. Hopefully no game show beat writers will get angry with his access in getting too close to Alex Trebek.