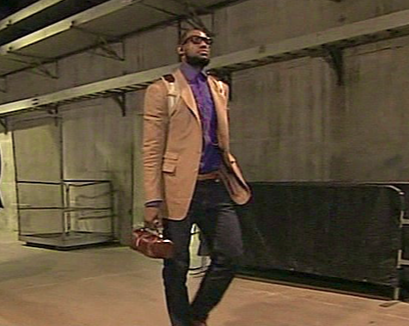 How much is one character worth? If you’re LeBron James, it’s estimated to be about a thousand dollars. ESPN’s Darren Rovell writes that Opendorse, a company that focuses on executing and monetizing digital and social media campaigns for athletes, estimates that a single 140-character tweet from James promoting a product has a “media value” of $139,474, the highest of any U.S. athlete. From Rovell’s piece:

“We’re basically saying that the value of one LeBron tweet is worth $140,000,” said Opendorse CEO Blake Lawrence. “And with that, you will reach 23 million people. It would cost you five times more to reach that many people with a TV ad.”

Lawrence’s company figures out how much a particular tweet, Facebook or Instagram post is worth by determining a celebrity’s true reach, activity, and quality and overall level of engagement of their audience of followers.

Despite the big numbers, Lawrence said most companies pay athletes between $1,000 and $2,500 for a single tweet. The most his company has sold a one-off tweet for was for $20,000 during last year’s NFL playoffs when a New England Patriots player, who he said he can’t disclose, took the bounty.

“The big guys are looking for a fully integrated endorsement deal that includes social media,” Lawrence said. “But there are only so many athletes that can get that type of home run.”

It’s worth considering that while James is ranked much higher than anyone else on this list, he’s far from the most valuable tweeting athlete globally. According to Opendorse’s own valuations from February (based on the 2014 calendar year, that would be Real Madrid’s Cristiano Ronaldo, clocking in at $303,900 U.S. per tweet. James has improved since then, though, as he was only valued at $126K per tweet in 2014, third globally (behind Ronaldo and Neymar, who was estimated at $143K). He did beat both of those athletes in overall endorsement take with $53 million U.S., too, second only to Tiger Woods.

These rankings should be taken with a grain of salt, though. By Lawrence’s own admission, the most Opendorse has sold a one-off tweet for is $20,000. LeBron turning down a six-figure deal suggests the $140K value may not be wrong, but perhaps the story would have been different with a different product or a different campaign. These estimations are one company’s thoughts, too, not necessarily what an athlete is demanding for a sponsored tweet or what a company is willing to give for it (and, as Lawrence notes, many of the top athletes aren’t doing one-off sponsored tweets, but rather integrated digital campaigns with Twitter as a part of them). Thus, they’re rankings, not necessarily accurate reflections of what people are willing to pay for sponsored tweets. Lawrence’s comments on “reaching 23 million people” are a little weird, too, and they ignore the reality of Twitter; sure, LeBron has 23 million followers, but how many of them are going to see an individual tweet he sends? Yes, that’s a problem with TV advertising too, as not everyone watching a specific program sees a specific commercial (especially in the age of the DVR), but it still doesn’t necessarily mean that it’s worth it for a company to pay $140,000 for a single tweet.

Still, the rankings are notable for how they compare athletes, and it’s interesting to see how LeBron’s endorsement is seen as so much more valuable than any other American athlete’s. A tweet from LeBron is worth double one from Kevin Durant? Triple one from Kobe Bryant? Four times one from Dwight Howard? That says a lot about LeBron’s place in sports, and the way he’s transcended basketball. If you want him to promote your product, it’s definitely going to cost you.