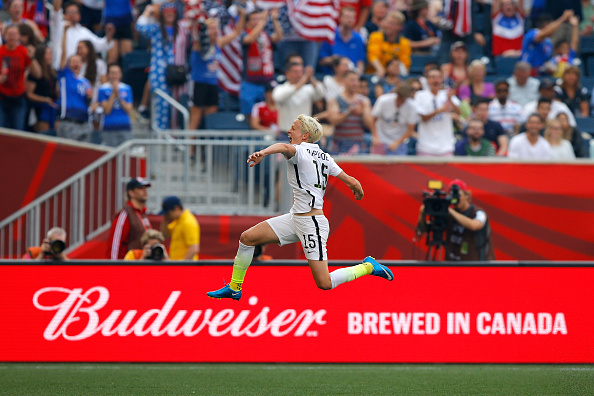 Sporting events that move to Fox Sports 1 take a certain risk by linking up with the nascent cable network.  With FS1 about to complete Year 2 of existence, there’s still sports fans that are getting accustomed to finding and watching the channel.  And as we’ve seen with NASCAR, MLB, and college basketball, there’s a tangible ratings deficit in their ratings at FS1 versus previous cable television homes.

The 2015 Women’s World Cup isn’t just bucking those trends and holding steady in the ratings department, but actually showing impressive growth compared to the 2011 tournament on ESPN.

Included in the news that the USWNT’s opening game against Australia tripled the audience of the first group stage game for the USA four years ago (3.31 million versus 1.07 million) was the overall success of the tournament thus far.  Through 8 games (Saturday-Monday), Fox reported a 73% increase in viewership versus 2011.

Three of those games were televised on Fox, four on FS1, and one game on FS2.  Of course the three million plus who watched the USWNT is the major driving force behind the increase, but when the numbers are put into further context, they paint an even more encouraging tale.

The men’s version of the World Cup has been lauded for its ratings hikes as soccer continues its growth in popularity on these shores.  But the 2015 Women’s World Cup is on pace to see better growth than their male counterparts at either the 2014 or 2010 tournaments, widely lauded as two of the biggest benchmarks for soccer’s rise.

There are some natural factors that are helping Fox Sports this year that go a little ways to explaining such a massive increase.  For starters, the tournament being played in Canada this year versus Germany four years ago helps the viewership numbers with some games being played in primetime.  However, the same timezone-friendly time schedule was present with the 2014 World Cup taking place in Brazil and that tournament still didn’t see the same explosion in ratings.  Also, while ESPN televised every game in 2011, the Fox broadcast network will air plenty of games that should help provide a boost.

These viewership numbers will be a major storyline to follow throughout the tournament for a couple reasons.  First, it continues to provide more ammunition for fans to prove that soccer is still growing in popularity in this country.  This is especially true for the women’s game and perhaps even more so for the USMNT and USWNT respectively.  For Fox Sports 1 to triple what ESPN did for the first USWNT game this year is just huge.  And it’s a safe assumption that the USWNT in 2015 should advance further than the USMNT did in 2014, meaning those enormous ratings gains should carry throughout the tournament.

Second, for Fox Sports 1 it proves that the network can carry a major sporting event and deliver viewers.  Given the ratings we’ve seen for their premier events thus far, that has remained a bit of a question mark.  And with Fox carrying the World Cup baton forward, perhaps through 2026, it’s a sign to soccer fans that they can pick up where ESPN left off with soccer’s growing fanbase at least in terms of viewership numbers.  (Editorially speaking, Fox has a bit of a ways to go to catch up with ESPN as the first week of the tournament has produced some highs and lows.)

If Fox and its cable outlets can continue these kinds of ratings gains throughout the 2015 Women’s World Cup, it’ll be the biggest statement yet that they are at least here to stay as a consistent presence in the sports world.