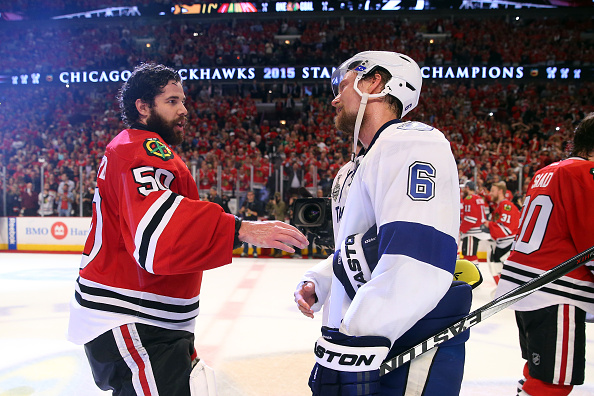 The 2014-15 Stanley Cup Final is officially in the books and the Chicago Blackhawks have been crowned the champion. While the hockey world continues to marvel and despise the Blackhawks for their third title in six seasons, NBC has released their final ratings for the Stanley Cup Final. In short, NBC saw some big numbers for the Final between the Blackhawks and Tampa Bay Lightning even though it wasn’t their ideal matchup.

The Stanley Cup Final delivered an average of 5.551 million viewers and a 3.19 household rating across NBC and NBCSN, making it the second most-watched on record. Extending our view back to the playoffs as a whole, the 2014-15 postseason saw an average 1.43 million viewers across the 88 games shown on NBC, NBCSN, CNBC and USA Network.

As far as ratings are concerned, it’s highly likely NBC was rooting for a New York – Chicago series, but they should be pretty happy with the second most-watched series on record.

NBC needed a positive postseason after witnessing declining numbers during the regular season. According to Sports Media Watch, NBC hosted 13 games which carried an average rating of 0.9 and 1.5 million viewers. This represented a decline of 12% in ratings and 13% in viewers when compared to 2013-14’s 1.0 rating and 1.7 million average viewers. NBC aired only one outdoor game this year compared to three last year, which likely explains the slip in numbers.