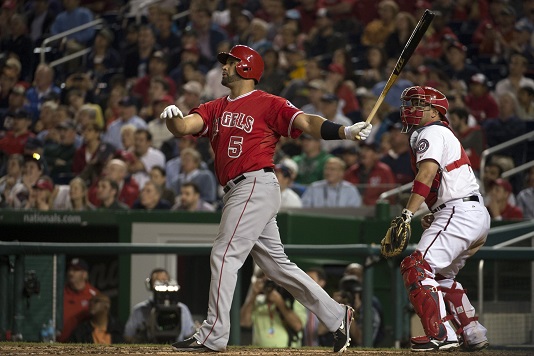 On Tuesday, Albert Pujols hit his 500th career home run, becoming the 26th member of the 500 Home Run Club. Almost immediately, tweets and columns began to pop up, questioning why no one was making a bigger deal of it. In the circles I’m a part of, I saw plenty of talk about Pujols’ achievement, and think it was covered about as well as it should have been.

However, I think I do know why people feel that way – the 500th home run came out of nowhere. Heading into Tuesday’s game, Pujols only had 498 home runs. There was no chase to 500, because Pujols only had one homerless plate appearance between 499 and 500. There weren’t days of cut-ins on ESPN and Fox Sports 1 – they only needed to do two. The last player to hit 500 was Gary Sheffield, and he sat on 499 for an entire offseason before hitting his homer in the Mets’ tenth game of the year. Frank Thomas and Manny Ramirez each sat on 499 for four days. Alex Rodriguez was one homer away for a week and a half. With Pujols, the hype was over before it even started.

Pujols’ hot streak that lead into his 500th homer also came out of nowhere. A week before hitting his homer, Pujols had only four homers on the season. The Angels were playing mediocre baseball. Pujols hitting 500 wasn’t on anyone’s mind at the time. Then, Pujols hits four homers in five games, and he’s in the club. If you’re not an Angels fan, that wasn’t even in your consciousness.

Another reason you can argue that Pujols’ chase didn’t get a lot of attention in the lead-up? The Easter holiday. He hit #497 on Good Friday in Detroit. #498 came on Saturday. The final two came on Tuesday, a night when many people were compressing after going back to work or school. Many people were spending their holiday weekends with friends and family, not watching sports.

Pujols’ achievement was also subject to competition from both the NBA and NHL playoffs. There were three NBA first round games on Tuesday, featuring teams in large markets like Chicago and New York. The NHL playoffs had four games on Tuesday night, featuring more large markets like Boston, Detroit, New York, Philadelphia, the Bay Area, and Los Angeles, the one that probably did a decent bit of damage to the local hype around Pujols’ homer.

One other thing that may have contributed to the belief that Pujols’ homer was undercovered – he’s not the star of his team anymore. The superstar of the Angels is Mike Trout, the best all-around player in baseball. Pujols isn’t the man anymore like he was in St. Louis. When a team’s star makes history, it just feels more special. When he does it with another team, there’s just something missing.

On another note, the call of his homer by Victor Rojas felt flat. I generally like Rojas, but this didn’t feel special at all.

Contrast that to Jon Miller’s call of Barry Bonds’ 500th homer, Chip Caray’s call of Sammy Sosa’s 500th (which in hindsight, is hilarious), Hawk Harrelson nearly having a heart attack during Jim Thome’s 500th (which was a walkoff), or the best 500th homer call ever in my opinion, Harry Kalas’ call of Mike Schmidt’s 500th.

Pujols’ 500th was just a perfect storm of multiple events that made it seem on the surface that no one cared, when in reality, there was so much going on that we just couldn’t get overwhelmed by history.