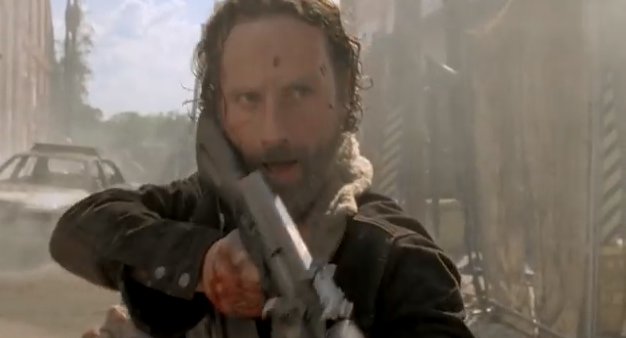 That streak may just be coming to an end as Monday Night Football has been overrun by the zombie apocalypse.

This season, Monday Night Football finds itself firmly entrenched in second place in the cable world for the first time.

Like millions of others around the country on Sunday night, I’m glued to the television cheering and booing and getting off the couch.  But it’s not for the NFL and Sunday Night Football, it’s for AMC’s The Walking Dead.  The reasons are very much the same – the action is enthralling, and I have money riding on it.  (I have Tyreese in my Walking Dead pool as the next main character to be killed off.  I thought I had it during the season premiere last week, but alas, the drama remains.)

Given the competition from Sunday Night Football, and the fact that it goes up against the #1 show in primetime television, The Walking Dead’s cable success is even more extraordinary.

From 2010-2013, Monday Night Football topped the weekly cable ratings 48 out of 53 times.  Midway through last season, The Walking Dead passed Monday Night Football for the first time and hasn’t looked back since.  When TWD debuted in 2010, the series premiere drew just a tick over 5 million.  Now it’s up to over quadruple that amount.

While The Walking Dead has seen an exponential explosion in ratings, Monday Night Football’s ratings have remained consistent over the years on ESPN.  Since moving to ESPN in 2006, its lowest season average is still a very healthy 11.2 million viewers in 2007.  This year, the franchise is averaging 13.5 million viewers through 6 games.  For the 2013 season, MNF averaged 13.7 million viewers for 17 games – just barely ahead of The Walking Dead’s Season 4 average of 13.3 million viewers.

The ratings for Season 5’s second episode will go a long way in seeing just how TWD can maintain this momentum over the course of the new season.  As a fan of the show, it’s definitely at the most exciting and unpredictable place it’s been at for a long while.  That, and the continuing cultural phenomenon of all things zombies, should bode well for sustaining viewership throughout the fall.

Powered by its impressive start to Season 5, The Walking Dead has put quite a bit of distance between the zombies and the shield and has a great head start.  If these numbers hold, it should outlast MNF and end the NFL and ESPN’s streak of housing the #1 show in cable for almost 3 decades.

We may finally have our answer to what can dethrone the NFL – zombies.  We should have known it all along…