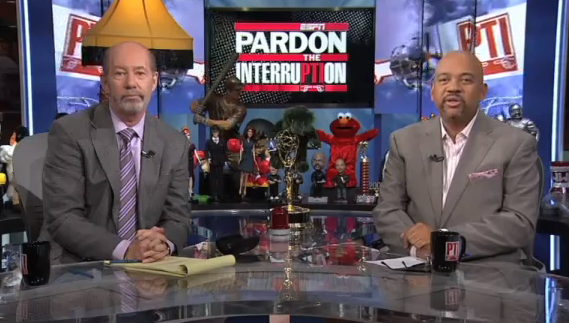 It began in 2001. Since then, ESPN has built an entire afternoon block of original talk programming around Pardon the Interruption and has spread its debate format to other shows like Numbers Never Lie, Around the Horn, and of course, First Take. But the original has been PTI and its co-hosts, Tony Kornheiser and Michael Wilbon.

By taking the debates and discussions they had inside the Washington Post sports offices, Pardon the Interruption made Mr. Tony and Wilbon famous beyond their wildest dreams. The show’s success allowed both men to leave the Post and try other projects. Kornheiser helped to launch Monday Night Football on ESPN in 2006 and stayed through 2008. Wilbon became a writer for ESPN.com and a part of the network’s NBA coverage. PTI also launched the career of Tony Reali who went from being “Stat Boy” to host of ATH and a role on Good Morning America.

And both men will continue on PTI for many years to come. ESPN has announced that Kornheiser and Wilbon have signed multi-year contract extensions which keeps them on the Worldwide Leader in their current roles. In addition to PTI, the two will contribute to other platforms.

Kornheiser tells USA Today’s For the Win that it was no doubt that he and Wilbon would stay: “Why wouldn’t we stay? The show’s great and the show is so much fun, it remains fun all the time. I can’t even imagine doing something that is as much fun as this and in my case — and I think Mike’s as well — we’re surrounded by people considerably younger than us and they keep our feet in this century.”

From the ESPN announcement, Wilbon says, “I’m beyond thrilled people still love watching PTI, and that ESPN still wants to have us. Doing PTI is as much fun for me now as it was 12 years ago, and contributing to the network’s NBA coverage allows me to do one of the things that has brought me great professional pleasure.”

In addition to PTI, Kornheiser hosts a daily midday radio show on WTEM in Washington, DC.

With PTI remaining on the air, ESPN shows it has plenty of faith in the popular duo to continue their run for several more years to come.