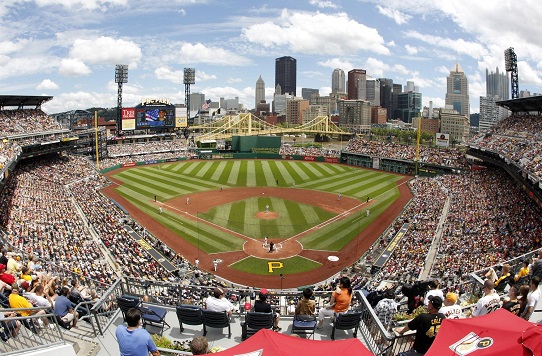 The 4th of July seems like it would be the ideal time for baseball, right? Baseball is (supposedly) the national pastime. It’s tailor-made for day games, especially on holidays. Yet this year, I was more than a little disappointed to see that there were just four day games scheduled this Friday (edit: make that three after the Orioles-Red Sox game was rained out), with only two of those games starting before 3 PM eastern.

I’d imagine part of the reason that teams pass on day games on the Fourth has a lot to do with them wanting to roll out an extravagant post-game fireworks display, but most teams take care of that at multiple times surrounding the Fourth. Hell, I was at a Phillies game last weekend that featured post-game fireworks – and that was the third of three fireworks shows that week.

It’s not surprising that there are only a few games taking place during the day today. MLB Network is airing the 11 AM Cubs-Nationals game. ESPN’s schedule is jammed with live events during the early afternoon, from Wimbledon to the World Cup to the always amazing Nathan’s Hot Dog Eating Contest. Fox Sports 1 has NASCAR qualifying in the late afternoon. Even if there were eight games airing, fans wouldn’t be able to take advantage of them without a subscription to MLB.tv and/or MLB Extra Innings.

And while it’s not surprising, it’s still a little bit disappointing. In addition to the lack of day games today, there was just one day game yesterday – and that started at 3:45 eastern. The gap is closed with nine day games on Saturday and the usual batch of 14 on Sunday, but would a broader slate of day games during the week really kill anyone?

I know it feels like we’re beating a dead horse with this topic, especially given Steve Lepore’s column about rethinking baseball on national TV earlier this week. But it’s a valid point – more day baseball games are great for fans. MLB Network generally airs day games on some combination of Tuesday, Wednesday, and Thursday during the week, but more often than not, there are only a couple of games in those weekday time slots and you get inundated with teams that play tons of day games each year, like the Cubs and Tigers.

Next year, this won’t be an issue. The 4th of July falls on a Saturday, and Fox loves to trot out primetime matchups at this time of the year. Hopefully, they only restrict three games to that window, and all of the other teams take on the field with the sun high in the air in the middle of the day. But this year, if you want to watch some baseball today, you’re either going to need to watch one of two nationally televised games during the day, or eschew a local fireworks display to watch a game. It really is a no-win situation for fans this year.