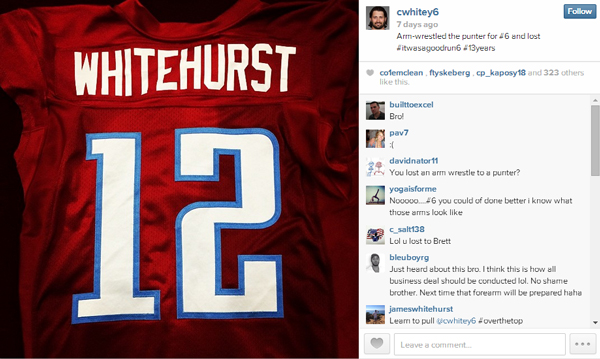 It’s been established that nothing is sacred anymore, but is anything real? That’s the question on our mind after reviewing the story of Charlie Whitehurst vs. Brett Kern.

See, a week ago, Whitehurst, who signed with the Titans this offseason, wrote on Twitter and Instagram that he had lost an arm-wrestling match with punter Brett Kern for the right to wear No. 6.

It was a mildly funny development that made the media rounds because we’ve entered the dark period of the NFL offseason.

And then we found out the whole thing was a filthy lie!

So Kern & Whitehurst may be doing a social media experiment here and pulling a gag/hoax over the arm-wrestling deal. #Titans @Midday180

It appears Kern let the cat out of the bag before Whitehurst confirmed it this week. He did clarify that there wasn’t any sort of elaborate hoax at play, but instead seemed to admit he was just being flippant. From the Tennessean:

“It all happened so fast. I don’t remember what motivated me to do it, but I think it was kind of like, `Hey, this looks pretty good,’ ” Whitehurst said. “It was a 30-second thought. I didn’t think anybody took me that (darn) serious.”

He said he doesn’t regret the post but does seem to realize he committed a social media gaffe.

“That was kind of my first real experience with that whole … Twitter stuff,” said Whitehurst, whose account says he joined Twitter in May of 2010. “Some of the guys later were telling me, `Hey, they’re killing you on there.’ I wasn’t really paying much attention to it. But that’s the first time I realized how modern media can happen.”

Key rules when it comes to using social media: Nobody can detect your sarcasm, and inside jokes shouldn’t be a thing. Because when you assume people know you’re joking without outwardly saying you’re joking and when said joke doesn’t really come across as a joke, you wind up tricking fans and sometimes hijacking a piece of the sports news cycle — even spurring 1,000-word columns at major sports websites and tweets from the NFL’s official account — all with a false premise.

Because it’s 2014, where everything out of the ordinary is immediately and unquestionably viral.

Let this be a lesson.