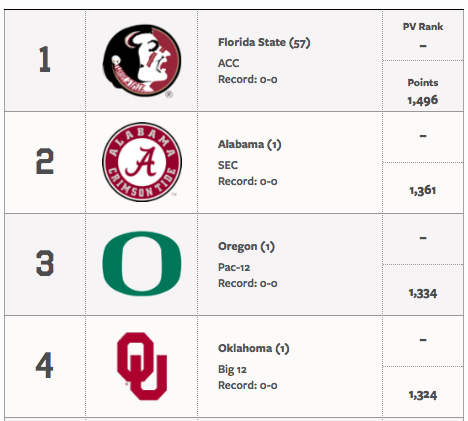 The AP college football preseason poll was released over the weekend.  This should mean absolutely nothing to you.  But like a monster coming out of hibernation, the poll’s release was like a gun sounding to kick off the increasingly toxic college football homer debate.

Auburn has seven opponents ranked in the AP top 25. Ohio State has one.

Preseason polls give chosen teams a humongous head start over their competition based on how good a group of people *think* they will be during the coming season.  What evidence is there to rank teams for the 2014 season?  None.  Because no games have been played yet.

Preseason polls dictate that our perceived quality of a team is actually more important than their actual quality.  Preseason polls are meant solely for us to argue about them.

These rankings are awful because they are solely concerned with narrative and expectation and not with actual results.  Nothing else in our democracy works this way.  Preseason rankings only lend to furthering pre-conceived notions about the way college football should work and not what really happens.  See: Missouri and the belief that a Big XII team couldn’t compete in the SEC.

Baylor could have won by 300 points last year in every game, and they were still never passing Alabama in the rankings while both remained undefeated only because Alabama started the year ahead of them.  You can ask a large number of college football fanbases about how the preseason polls have wronged them over the years.  Start with the 2004 Auburn team who was ranked #17 in preseason, went undefeated, and never had a chance to play for a championship.

Last year was a perfect example for the worthlessness of preseason polls.  Here’s a list of the Top 5 teams from last year’s final AP rankings and where they were before the season started.

Three out of the top five teams in the country at the end of the season were unranked before the season began.

You know how ridiculous preseason polls are?  Florida was ranked #10 in the preseason last year.  Florida.  The team that produced this masterpiece.

And people collectively decided entering the season that that was the 10th best team in the country!

Let’s have some real talk about preseason college football polls.  They are the most worthless, meaningless endeavor in all of civilized society.

And this year, finally, the polls mean absolutely nothing.

Repeat after me: the polls don’t matter.

Just like the NCAA Tournament in college basketball, the games that matter in the college football postseason will be decided by a selection committee, one that will hopefully be free of any preseason narratives.  That’s what makes college basketball so great – teams get to decide their own destiny without it being subjected to the First Take panelist within us all.

So why are we wasting our time with how many teams from which conference are ranked in the preseason poll?  If preseason polls meant anything, Georgia would have something like four national championships in the last decade.  Michigan and Texas would still be considered legitimate national powers.

Until this year, college football was the only major sport where opinions had a tangible impact on deciding a championship.  It was the only sport where a poll and a ranking was more important than deciding the games on the actual field.  Thankfully, the polls have been thrown out the window and hope exists that the selection committee can remove itself from the tiresome conference superiority debate and the preseason rankings that set college football on its pre-determined trajectory before the season even begins.