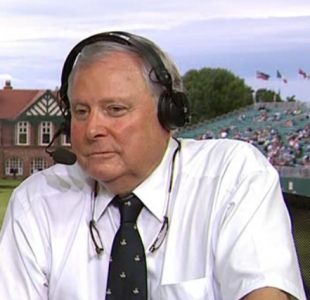 During the Open Championship this week, ESPN has provided us with little drips and drabs of the great BBC announcer Peter Alliss. On Thursday and Friday, he appeared with Scott Van Pelt for about an hour doing not only commentary on the golf, but anything else they could discuss like The Beatles since the tournament is being played near Liverpool, the home of the famed group.

But if you have DirecTV or WatchESPN, you also have a channel devoted to the BBC feed where Alliss is the main anchor for The Masters as well as the Open Championship.

Alliss can be blunt, humorous, a curmudgeon, thoughtful and irritable all at once. And that’s what makes him one of the best commentators on golf. When ABC regularly aired the sport, Alliss would be part of the network’s coverage of the U.S. Open, Open Championship and PGA Championship, and make appearances during the PGA Tour. However, with ESPN limited to the Open Championship starting next year, it’s all we get of Alliss stateside.

Here are some of his best comments from Saturday’s third round:

Observing Rickie Fowler eating a sandwich in between holes: “Is it good to walk and eat? I thought that gives you indigestion … Don’t drop mayo on your clean shirt!”

On the crowd at Royal Liverpool: “They’re mostly well-behaved staying within the boundaries except for a straggler or two who yells ‘Get in the hole!” I’ve never understood that.”

On Charl Schwartzel playing with an all-South African group in the third round: “It’s interesting. They all speak Afrikaans. I don’t know why that’s interesting actually.”

On Rory McIlroy’s third round: “At the end of a perfect day, someone should write a song about it.”

There are certain people who rise above their sport and make the action sound like poetry. Wordsmiths. Announcers like Vin Scully, Doc Emrick, Ian Darke and Peter Alliss constantly provide the viewer with the proper captions and observations that add to their sport.

Let’s hope Alliss continues to provide commentary for as many years to come.