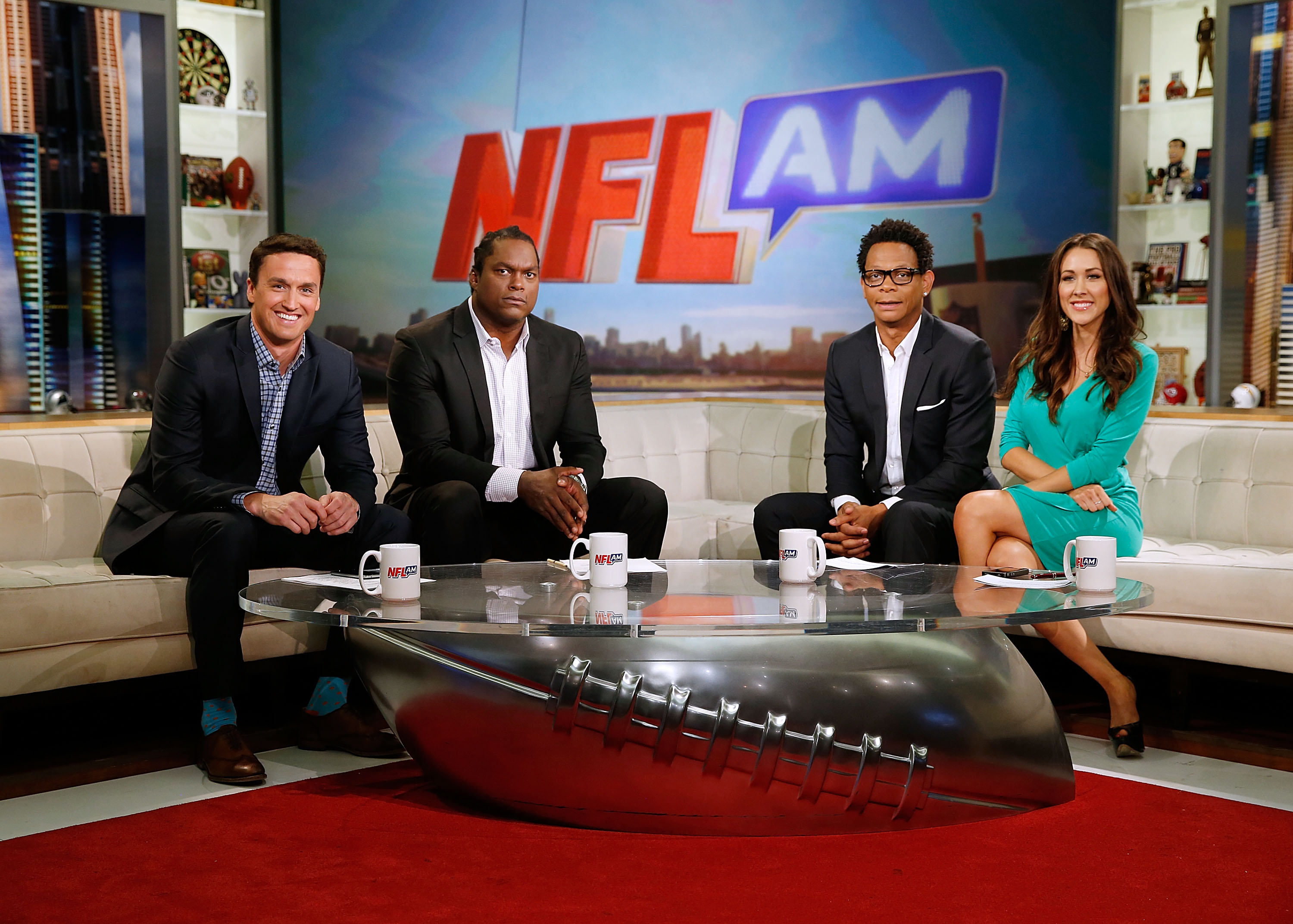 NFL Network’s morning show, NFL AM has been on the air for two years. It originally launched with co-hosts Brian Webber and Nicole Zaloumis with analyst Eric Davis and reporters Steve Wyche and Mark Kriegel. Webber left nine months after the show debuted and Zaloumis became the main host. Over the last two seasons, the show has added Molly Qerim and Terrell Davis with some contributions from former NFL linebacker LaVar Arrington.

Just last month, Zaloumis left the show to spend more time with her family so it has led NFL Network to look at new hosts for the program. Awful Announcing has learned that NFL Network has hired Rhett Lewis and Erin Coscarelli as new co-hosts. They start next week.

Lewis has been an anchor and reporter at WHDH in Boston for the past five years. During his time, he covered all four major Boston teams in each of their professional championship games or series.

NFL AM Executive Producer Jeremy Louwerse tells Awful Announcing that Lewis has a football background through his father who was a trainer with the New Orleans Saints and currently the Detroit Lions. Louwerse said Lewis “grew up in NFL locker rooms and the football culture.”

Coscarelli comes to NFL AM from Comcast SportsNet Bay Area in San Francisco where she was a reporter and anchor for the regional sports network’s signature program, SportsNet Central. She has also worked as a sideline reporter for ESPN, Fox Sports West, NBCSN and Pac-12 Networks.

Louwerse said about Coscarelli, “She reminds us a lot of Kelly Ripa here. A Kelly Ripa with a really strong football knowledge.”

Arrington will join the show on Saturday, August 2 for a special show during the Pro Football Hall of Football Induction Weekend. He will move to Los Angeles after being a sports radio talk show host in Washington, DC.

Louwerse said, “LaVar has contributed to the show in the past year, but now he’s going to become a full-time member of the family and we are thrilled to have him.”

In addition, Eric and Terrell Davis will remain with the show along with part-time contributions from Jordan Babineaux.

Qerim, Kriegel and Wyche will also stay with the show.

Louwerse tells Awful Announcing even though the cast is changing, the show will stay the course and not relaunch formats, “We like the idea of four people sitting around on the couch talking about what’s going on in the NFL.”

The show has remained true to its original launch, reporting on football, bringing viewers the latest information on the NFL and providing highlights. NFL Network says the first half of 2014 saw a 10% increase in viewers from the year before (64,813 to 58,765),

Louwerse said viewers will enjoy the new cast and he said one of the main things they’ll get from Lewis, Coscarelli, Arrington and the two Davises, “I think they’re going to laugh. In a great way, they’re going to enjoy their mornings even more. You’re going to have this spontaneity and fun, but at the same time, you know where to go when football news is breaking.”

Lewis and Coscarelli will begin as co-hosts on Monday, July 13 and the entire cast will be together starting in August.

The full interview with NFL AM Executive Producer Jeremy Louwerse can be heard at Fang’s Bites.