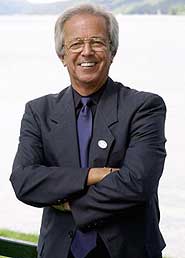 The long-time Voice of the Cincinnati Reds, Marty Brennaman is a Hall of Fame Broadcaster. He’s been broadcasting the team’s games dating back to the old Big Red Machine of the 1970’s and he’s seen many ups and downs.

He’s beloved by Reds fans, hated by Cubs fans, but overall, he’s well liked in the baseball and broadcasting communities.

During a Reds-Cubs game, Brennaman with the help of partner Jeff Brantley, took a Twitter fan question and answered it. The question from LaymanJohn7 might not have been totally serious:

What is your biggest fear in life? #AskMarty

But Brennaman went really dark and serious saying the subject wasn’t something to made light of and responded his biggest fear was dying alone in a hotel room. Marty then cited two broadcaster deaths, Don Drysdale in Montreal and Richie Ashburn in New York as examples. Brennaman said it’s why his wife often travels with him on the road. “And I don’t think that’s a way I want to go,” he added.

It’s a really bizarre segment as you can hear.

Brantley tried to make a joke, but you can tell he was taken aback by Brennaman’s answer.

It’s a place where no broadcaster has ever gone during a game and probably won’t ever again.