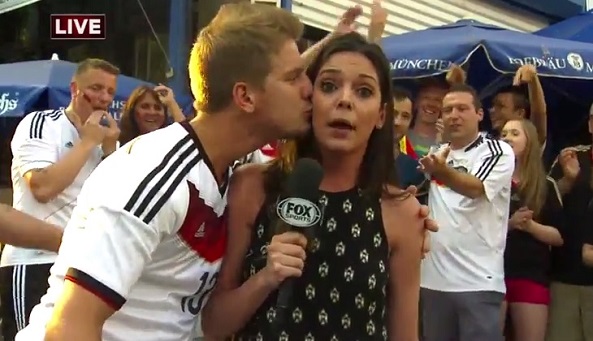 During Monday’s episode of America’s Pregame, Katie Nolan filed a report from a German bar in New York City, where she watched Germany’s 2-1 extra time win over Algeria. Near the end of her report, things got…well, they got a little interesting.

It’s not every day where you see a reporter get kissed twice by a fan, but that’s exactly what happened here.

To her credit, Nolan took the incident in stride (whether it was pre-planned or not) and had a nice one-liner on Twitter afterwards.

Just thankful the kiss was German, not French. RT @FOXSoccer: @katienolan went to a German bar for #GERvsALG. WATCH: http://t.co/52FQHhGhCQ

Hell, Fox’s Peter Schrager might even get in on the act!

@PSchrags if you're around for the game tomorrow, we're kicking it in DUMBO. Can probably even arrange for a stranger to awkwardly kiss you.

Anyway, can Katie get back on our TV sets doing more than filing reports from pubs? She was one of the bright spots from the first year of Fox Sports 1 (even if Crowd Goes Wild met an untimely demise), and it’s disappointing that she hasn’t landed a more regular gig outside of her regular No Filter videos with the network.