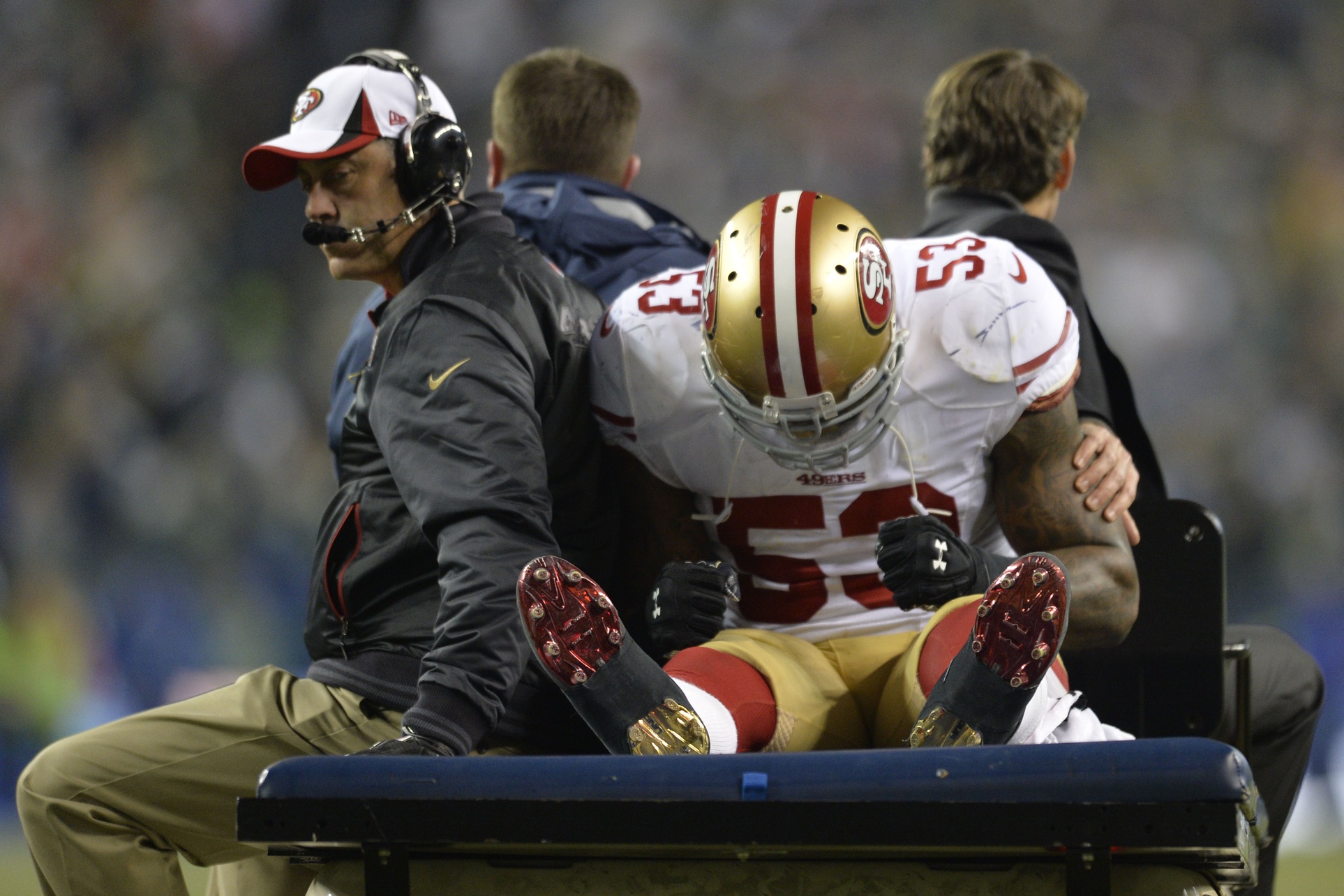 Any time a serious injury happens during a major sporting event, the broadcast crew is forced to make a split-second decision about how they present it to viewers. The rise of GIFs and the ease of uploading screencaps and video means those same ethical lines are now being approached regularly by major sports sites and their social media accounts.

The debate came up again on Sunday in the immediate aftermath of San Francisco 49ers linebacker NaVorro Bowman’s injury in the fourth quarter of the NFC Championship game against the Seattle Seahawks.

You probably saw the play. With the Seahawks leading the 49ers 20-17 and under nine minutes left, Seahawks receiver Jermaine Kearse fumbled at the 49ers’ 10-yard line. Bowman clearly recovered the fumble, but Kearse was pushed into Bowman’s left leg by 49ers safety Eric Reid. As Bowman lay on the ground in pain, the play was incorrectly ruled a fumble recovery by Seattle.

FOX Sports showed ten replays from various angles, despite the fact that the play itself could not be reviewed, according to league rules.

On Twitter, the reaction was predictably massive, but what stood out was the collective discomfort about the replay barrage. Was it excessive to show an unreviewable play involving a scary knee injury ten times?

“I think FOX found itself in a tough position with this particular play,” says SB Nation managing editor Brian Floyd. “If it was just the knee injury, I don’t doubt that it’d be a replay or two and then commercial. But there were a lot of moving parts here. Had they not covered the fact that Bowman came down with the ball, then lost it in the pile, they’d be doing a disservice to viewers.”

Did the magnitude of the play justify the number of replays? The Big Lead video editor Michael Shamburger says FOX would have been criticized either way.

“While ten may have seemed a little excessive, the call was close at the goal line in a big game involving professional athletes and the injury was almost secondary to the play at the time. Had FOX not shown the replay they probably would have received backlash on Twitter for that decision.”

Regardless of the backlash, not everyone believes it was the right decision in the truck. One such critic of the way the network handled the play was freelance video editor C.J. Fogler.

“The play wasn’t reviewable, and [FOX Sports rules analyst Mike Pereira] said as much halfway through the replays, at which time you can stop because showing it again gains you nothing,” Fogler said. “Freeze-frames of Bowman on the ground with possession are enough.”

“They could have shown parts of the replay before and after the injury without showing it, but my personal annoyance was the repeated showings. Two or three times was enough to see the necessary parts of the play.”

Guyism senior editor and co-founder Andy Isaac says people still watched the play, even while complaining about how many times it was shown.

“It happens. It’s something we have to deal with. The Twitter mob will scream ‘enough replays’, yet they still look, they still peek through their fingers as they cover their face,” Isaac said. “FOX had a duty to show that play because of its importance in the game. They did a good job, I applaud them.”

FOX may have had an obligation to its viewers, but what about the sports sites that share GIFs, screencaps and videos? How they handled the Bowman injury varied across the board.

“We ran only one GIF of a replay and I don’t believe it was the worst angle,” Shamburger said. ” [The worst angle] was the view from behind Bowman from the end zone. Had we run that, you would not have been able to see the ball being stripped and the injury would have been the focus. While many people won’t like that answer, the option to not click on a link is always there.”

Over at SB Nation, Floyd believes they handled it appropriately.

“I’m fine with how the site handled it and didn’t see much uproar about it. It was a big moment, and a big injury, that held both short and long-term significance. If framed correctly, and with warning, it felt like a play worthy of showing.”

“It fit within a larger story — about the injury, the ‘fumble’ that should’ve stayed with the Niners, and the athletic-as-heck play Bowman made that got lost in the shuffle — that’s newsworthy.”

Isaac says preparing the viewer for what they’re about to see is the right thing to do, and puts the decision in their hands.

“As long as you’re giving viewers a disclaimer: ‘Hey, you’re about to see a gruesome sports injury’, then there’s no problem. I covered the Bowman injury with a screencap and gave viewers an option to click through to the site,” Isaac said. “I normally post screencaps through Twitter but the pics are ‘inline’ now [they appear automatically in a user’s feed]. There would be no way for viewers to avoid.”

Fogler is typically among the first to produce media of a big play or an amusing moment when it happens, but the Bowman injury was a different story.

“I decided after the second replay that I had seen enough, and my personal limit (since I don’t have a site that requests or demands I provide a still/GIF/video) was reached,” Fogler said. “This is a key point — people want to see them if they were unable to see the game and that’s a large part of my following. But if I personally don’t want to watch it again, I’m not doing it, and it was easy to wait five minutes to point people to a site that did.”

So we know what they did and why they did it, but where do these editors stand when it comes to making their own versions of serious injury replays?

“My opinion on GIF-ing injuries changed after the Kevin Ware injury,” Shamburger says. “We got a lot of backlash for that GIF and I think we all learned something from it. Would I GIF it again if it happened this year? Yep. because it was a huge game-changing moment, but I know we would handle the post like we did with Anderson Silva’s leg break. We provided a link to the GIF on a separate page so that those visiting the post would have an option instead of having the injury forced on them. That’s why I prefer to use video if possible, but some leagues aren’t as friendly [regarding rights] with video as others.”

Shamburger did avoid making a GIF when then-Houston Texans head coach Gary Kubiak collapsed during a game in November.

“We did run video of the Kubiak collapse. Ultimately, video puts the decision to watch in the hands of the user in every situation,” he said. “My problem with GIF-ing something like Gary Kubiak collapsing is that in that situation there was absolutely no way to know whether Kubiak was fighting for his life at the time.”

“I’d prefer not to be the guy that GIF-ed a death.”

“My own stance is the same as our editorial stance. We make calls on a case-by-case basis without a real blanket rule. It’s more of a feel thing. Is this newsworthy or injury-porn (for lack of a better word)? How gruesome is it? Is it college or professional? What’s the context surrounding the injury?”

“I’m not a fan of ‘WHOA, LOOK AT THIS NASTY INJURY’, for obvious reasons — sports are fun and I enjoy the silly moments, not the gruesome realities of football. But everyone has to make calls like these and they’re never easy.”

Isaac says he too was shaken by Kevin Ware’s injury.

“The only time I felt apprehension was the Ware injury — and frankly, that was because I was personally grossed out,” Isaac says. “Bone breaking through skin just isn’t common outside of extreme ER cases. Instead I captured the reaction from the Louisville bench. That to me was more newsworthy and more compelling to viewers.”

Fogler does make injury GIFs, but says his own tolerance level and the specific camera angle are major factors in the decision-making process.

“It’s mostly about just how bad it is. The more the joint or bone is bent in a direction it shouldn’t go, the less I want to see it again. I did the Brian Cushing injury because the worst part of it is hidden by a body, if there wasn’t anyone blocking the view of it, I might not have.”

So what’s his personal limit?

“I can’t tell you for sure, but I know it when I see it, and there are other places to get them if I decide I’d rather not.”

Would he have the same apprehension if he were in the shoes of a site editor like Floyd, Shamburger or Isaac? Would they hold the same stance if they didn’t have to answer to a higher-up or carry out the vision of their respective companies? We may never know.

The issue seems to be more about how an injury is presented than whether or not it’s post-worthy. Is it morally acceptable to create and share looping images of people being seriously injured? That’s up to the individual, but newsworthy moments should be documented as long as they’re presented in a way that warns the user and gives them a choice.

If it’s news, it should be covered, and there are ways to ensure the viewer isn’t involuntarily subjected to something they don’t want to see.

In the cyclical world of viral media, the debate is bound to rear its head again. Each time it does, we learn a little more about our limits and the medium itself.