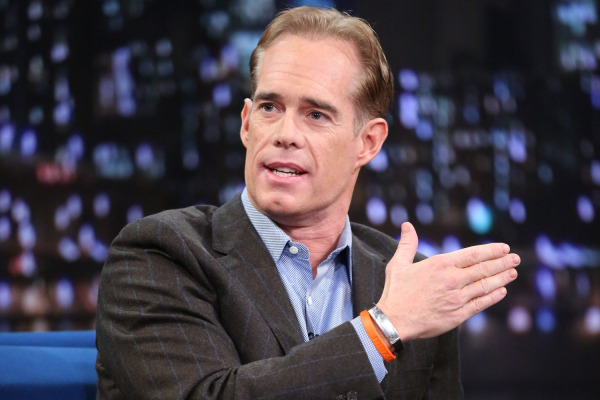 A couple of weeks ago, it was quietly announced that NFL Films Presents was heading over to FS1. This made me happy, not only for upstart FS1 who was in desperate need of some quality original programming, but also the show itself which was very often lost in the shuffle on ESPN2.

NFL Films Presents debuted yesterday on FS1 but there was just one detail they decided to hold back until the last moment….. 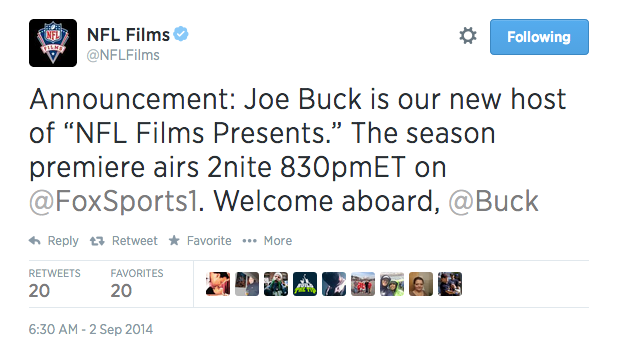 For those unfamiliar with NFL Films Presents, it’s a hidden gem that would air late night/early morning on Monday Nights/Tuesday mornings on ESPN2 and then re-air later in the week on ESPN2 and NFL Network. Often the show would get pushed around very much like Olbermann does because of live events going long. At times the show was skipped entirely, which would lead to me a Stephanie Tanner “How rude!” reaction.

It’s one of my favorite programs and one that I would say compares favorably to ESPN’s 30 for 30 Shorts. Usually NFL Films Presents has two or three segments, produced with the same high NFL Films quality that you see with A Football Life and Hard Knocks. The segments have quite a range as often they’re lighthearted and silly (like Sean Payton’s sideline addiction to Juicy Fruit gum) while others have choked me up (like learning about Greg Cooke’s short lived career or The Last Lecture of Randy Pausch).

Outside of the laughs and occasional tears, Presents thrived showcasing all access footage from games and practices as well as what I would call “football nerd’ topics like the history of the official NFL football and where certain plays got their original naming from. For many, the 30 minutes of Presents a week is the closest bond between the NFL and its fans as it blends history, emotion, and personality and covers a wide scope of teams, stories, decades and players every season.

As long as I can remember, Steve Sabol was an uncanny professor of the NFL and NFL Films Presents was his classroom. Since his passing, Presents had moved away from having an in-studio host and just had an off camera narrator segue between segments and it just felt right as it would take quite the individual to replace Sabol.

Initially I thought it was a one time thing given it was a debut episode on FS1 and the out-of-touch suits thought Buck gracing a little gem like Presents with an appearance was somehow helpful. Upon finding the announcement tweet, I realized this was how it’s going to be. Joe Buck introducing segments, doing panels, talking, and basically invading my bullshit-free serene football sanctuary.

It took a while to settle in as I am/was truly miffed that Fox would take a nearly-perfect show like NFL Films Presents and turn it into Joe Buck Live 2.0. Fox was apparently undeterred by the fact that he flamed out at HBO in historically epic fashion in his last foray into a studio environment.

It’s still hard for me wrap my head around, but like clockwork Fox does something incredibly obtuse every 3-4 months under the guise of “WE’RE INNOVATING SPORTS OVER HERE. SHEESH LAYOFF US! REMBER WHAT WE DID FOR NFC FOOTBALL IN 94? YOU DON’T? YEAH THAT WAS 20 YEARS AGO. WE’RE FUN THOUGH! WEEEE!”

I voiced my frustration on Twitter (comparing Joe Buck to my dislike of avocado among other rushed thoughts) which led to a nice group therapy session where many thoughts were exchanged on Buck’s role with Fox Sports as a whole.

From the looks of it, I’m not alone in my disappointment as I’ve yet to find a positive tweet about the development but am finding quite a bit of these.

From Steve Sabol to Joe Buck. Wow. What a downgrade. MT @NFLFilms: Announcement: Joe Buck is our new host of “NFL Films Presents.”

While I don’t consider myself a Joe Buck hater, it’s puzzling why Fox feels the need to put him on seemingly every single property. Next year he’ll call his first US Open as Fox Sports takes over USGA rights. Nevertheless, Buck is a mainstay for better and for worse and has been for two decades with no end in sight. Even though some of us have grown to appreciate him as an announcer, having him parachute in to host NFL Films Presents is an odd, and forced, fit especially considering that he’s much more of a baseball guy than he is football guy.

When people remember Steve Sabol, they remember the visionary, the creative genius, and the type of guy he was. Rarely do we talk about him as a television personality. Sabol was a common element on many shows but on Presents he thrived as a historian, storyteller, interviewer, comedian, biographer, and an ambassador of the game.

Fox’s version of NFL Films Presents doesn’t live up to the Sabol legacy. Rather, it’s now just another vehicle for Joe Buck. To be fair, probably 95% of people covering the NFL also would fall woefully short here in trying to step into this role. Why Fox couldn’t just leave well enough alone with NFL Films Presents and instead has turned it into Joe Buck’s NFL Show boggles the mind.

I don’t care what level of cross-promotion, branding, and platforms the suits at Fox used to validate this decision, it’s just a total abomination in practice and logic. It’s another example in a long line of Fox taking things that weren’t broke and errantly trying to fix them with their patented “attitude” and “branding.”

For fans of the show, we’d certainly love your feedback in the comments on the move to FS1 and what you thought of the show’s debut on the new network and new host. Basically, let’s grieve together as Fox continues to put Joe Buck above all else.