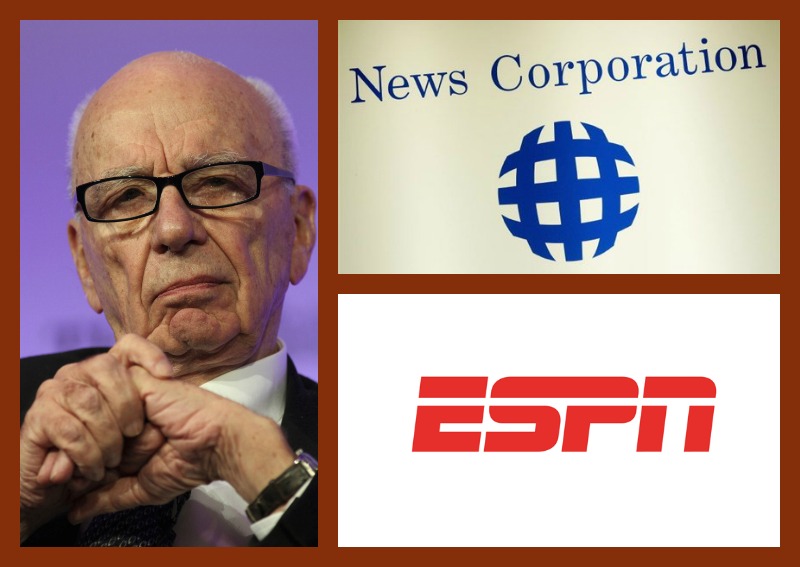 When it comes to these massive potential deals like AT&T’s proposed acquisition of DirecTV or Comcast’s proposed acquisition of Time Warner Cable, for the most part I choose to largely ignore the whirlwind of news and analysis because A) These deals do not have government approval yet and B) It can be painful to wrap your head around all of the implications given the sheer girth of them.

Sure, the above deals would almost assuredly be negative to most consumers… but for sports fans these combined zillion dollar corporate behemoths may allow for greater access to sports content as we may see Sunday Ticket, PAC 12 Network, SEC Network, and various sports regional channels get further distribution.

With the new rumor of FOX on the acquisition prowl trying to absorb Time Warner, I just couldn’t stop my mind from connecting dots as to the motivation and potential post-acquisition strategy.  For those unfamiliar with either company, below is a graphic from the Wall Street Journal article linked above. Please note the market capitalizations of each company. 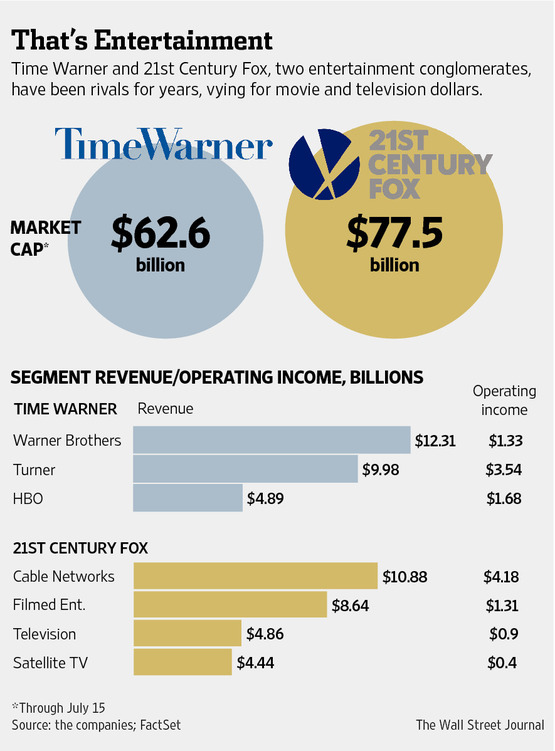 You know how much ESPN is valued at? Recent research pegs the value at $50 billion and change – quite a bit considering the narrow focus they have compared to the giants shown above.

I truly believe the dominating force behind this audacious move on FOX’s behalf is the ambition to close the gap with ESPN.

That’s just where the growth in revenue would come from. Having to sell CNN and figuring out how to sort out cable networks that overlap in audience as well as how to operate formally competing movie studios is just well….. a huge clusterf*ck. But acquiring a wide swath of sports rights, talent, and original programming in one large swoop rather than cobbling it together over decades to aggressively close the gap on ESPN?  (Who has long since lapped the field, probably multiple times over by Mario Kart standards.) Now that would be worth the effort.

It’s been nearly a year since F0x Sports 1 has launched and the reality is that they just don’t have enough live rights and resources to truly compete. That’s not a knock on them. What they’ve done has been decent given what rights they own, the limited budget, and limited portfolio of personalities and original programming brands.

It’s like when you were a little kid and you cooked or attempted to cook breakfast for a parent on their birthday, Mother’s Day, or Father’s Day and they smiled after first bite and said “Oh? This is… good.”

The attempt and finished product is good only with the context that takes into consideration the lesser planning, resources, talent, and background compared to the competition.  A side by side comparison to ESPN (the breakfast equivalent to a buffet at a swanky Vegas hotel), isn’t as kind.

But rather than compete with Turner, who seems to be effectively boxing out FOX for NBA rights, why not just acquire them? Not just Turner, but their MLB rights, NCAA Tourney rights, PGA rights, NBA rights, Bleacher Report, their stewardship of NBA TV as well as management of NBA.com, NCAA.com, PGA.COM.

Then there is HBO, who in addition to boxing, churns out some of the best original sports programming that exists with various documentaries, Hard Knocks, 24/7, and Real Sports to name a few.

Mind spinning yet? The question goes from, “Is there enough meat on the bone to compete with ESPN?” to “How would they go about doing it?”

Would FS1 remain the sports brand they’d look to assimilate everything under or would a new name be created?

If so, would FS1 remain at its current location or would it maybe move to a channel that FOX deemed to have too much overlap with their own cable channels. For instance, perhaps TNT with its higher carriage rate and larger built in audience would become the sports hub with its popular content moving to FX, FXX, FX Movie, etc? Maybe FX can become the new Law & Order channel. God Bless Jack McCoy.

Or perhaps TBS could be shuttered and become the new FS1 and Conan and Seinfeld reruns would move to FXX (from the Tonight Show to FXX!….poor Conan).

Perhaps FS2 would move to truTV and all of these shows showing fictional reenactments of cars being repossessed and towed would cease to exist spurring an intellectual renaissance in America after being unshackled from the mindless drivel of the stupidest channel on cable. You may think I’m being facetious or over optimistic, but I just have that much faith in Mike Francesa.

Want me to really blow your mind? It’s not even out of the realm of possibility that Bleacher Report – with its social and search engine traction and younger demographics – becomes the umbrella sports brand and channel/channels that everything sits under. From a digital perspective, would a combined company want to continue operating two different sports portals?

You could get 10 smart industry people to think through how to best merge the companies and they could return 10 totally different answers. All of them seemingly ridiculously too radical to realistically work. That being said, potentially for the first time in the history of cable television, the reality of ESPN having an actual challenger may be starting to take shape. And good god would that not only shake things up but it would have to be considered the boldest move in the history of sports media/sports business.