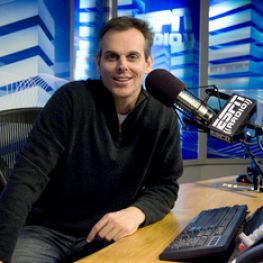 I feel sorry for Dan Steinberg of DC Sports Bog.  That seems a little odd to say given he’s a funny, successful writer at the Washington Post.  But I do feel sorry for him… simply because Colin Cowherd has said so many dumb things about DC professional athletes that Steinberg has had to transcribe over the years.  Poor guy.  Nobody deserves that.

First it was Cowherd’s incendiary comments on the late Sean Taylor, now it’s his vendetta against John Wall that is flaring up again.  Four years ago, it was notable for Cowherd’s rant (that many called race-baiting) at wall for doing the Dougie before his first pro game.  Cowherd then doubled down by attacking Wall through his deceased father.  Swell guy.

So with the Wizards in the playoffs and doing very well against the Bulls, it was no surprise to hear Cowherd say more mind-numbing things about John Wall.  Dan Steinberg deserves a medal for having to transcribe more trademark Cowherd commentary:

“Ooh, and you made the playoffs in the East. Woo-hoo! Don’t forget the Knicks until the last week were fighting for a playoff spot in the East; they fired their entire staff. So listen, when John Wall came out and did the Dougie, first home game, for 34 seconds, he was a moron. It’s the dumbest thing I’ve ever seen. I will never back down.”

How petty is it to hammer someone for a pregame dance they did four years ago?  Isn’t it time to move on?  Furthermore, how incorrigible is it to say “I will never back down.”

It’s this kind of egomaniacal behavior that is the absolute worst in sports media, whether it be on radio, TV, or print.  As if a four year old opinion about a guy doing a 30 second dance must be protected and defended at all costs like it’s some kind of sacred treasure.  It’s not.  It’s an opinion about something that is ultimately meaningless.  It’s ok to back down and not defend it till your last breath.  Giving ground to John Wall and admitting you were wrong will not be the end of you.  You’re a sports talk radio host, not a Spartan at the Battle of Thermopylae.

Why did Cowherd launch into another John Wall rant?  Because Rick Bozich of WDRB in Louisville said it was a great time for Cowherd to apologize.  Seems reasonable, right?  Not to Colin Cowherd:

“John Wall. Yeah, I have to apologize, I mean, after that win over a Chicago team that’s missing Derrick Rose and Luol Deng, where they finish as a middle-of-the-pack seed and their coach is in the running for coach of the year because nobody can believe it. John Wall’s a nice player. He’s a nice player. He’s developed into a nice player. But you can’t and never will get an apology for that Dougie thing. That was moronic.

Cowherd’s response?  Sarcastic, back-handed comments to local sportscasters, columnists, and radio personalities who are beneath him.  Could you imagine Ron Jaworski going on ESPN and flippantly telling websites and blogs “you’re welcome for the pageviews” over his Johnny Manziel comments?

Put it another way – ESPN is worth $40 billion dollars and has a brand more recognizable than Starbucks.  Would you ever expect a Starbucks barista to start trashing the mom and pop coffee shop on the other side of town?  Of course not.  Why?  Because they’re bloody Starbucks.  But hey, at least Cowherd didn’t try to send his listeners to shut down the WDRB website, so that counts as progress.

Shouldn’t the self-proclaimed “worldwide leader in sports” be better than all of this?  Instead of being excited about the Washington Wizards and the growth of John Wall and Bradley Beal, we have more of this nonsense polluting the airwaves.  When Cowherd goes on these rants and picks fights with athletes and local media, it’s exactly the kind of behavior that hurts the ESPN brand.

It’s exactly this kind of arrogance and self-importance that is the worst of ESPN.  See some of Cowherd’s previous rants for more examples.

It’s the Bayless and Cowherd types that see themselves and their opinions as more important than the sports and athletes they cover.  That brand of narcissism is why Skip Bayless goes on television and says ridiculous things like, “I do believe that Stephen A. and I deserve game balls for last night because I do think we helped motivate the Wizards” when they beat the Heat earlier this year.  If the Wizards go on and defeat the Bulls in this first round series, nobody would be surprised if Cowherd asked for a game ball for his “motivating tactics” too.