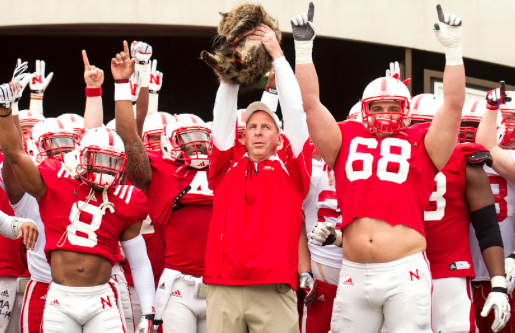 Before we get started, that’s the greatest sports picture of the year, right?

College football is a universe filled with conflicts of interests and complex relationships.  Athletes and institutions, sponsors and scholarships, television networks and conferences. There’s a “you scratch my back, I’ll scratch yours” nature about the sport that always lies somewhere beneath the surface.  And because FBS college football is unique in that its championship is largely decided by people and polls and boardrooms, these complex relationships always bear watching.

Nebraska coach Bo Pelini spoke out about the largest of those relationships that casts a shadow over the sport – ESPN’s backing of the SEC Network.  Pelini said that the relationship called into question the network’s neutrality:

“I don’t think that kind of relationship is good for college football. That’s just my opinion,” Nebraska head coach Bo Pelini said Monday. “Anytime you have a relationship with somebody, you have a partnership, you are supposed to be neutral. It’s pretty hard to stay neutral in that situation.”

“They play good football, and I know there is some good football played in some other conferences, too,” Pelini said. “It’s hard to say because you just don’t see, unfortunately, in this day and age, a lot of crossovers. So you don’t get a lot to make that decision on, to be able to compare and contrast. You have to go off what the media says to a certain extent and what some people say.”

ESPN and the SEC are in a deep, committed, multi-decade business relationship.  The better the SEC does, the more teams they can get in the playoff, the more money ESPN can make.  That kind of relationship should give anyone pause when anyone on ESPN airwaves sells the soap for the league on a consistent basis.

The more the brand of the Big Ten is devalued (and that seems to be the only thing the conference is excelling at on the football side recently), the more it hurts ESPN in the short term.  Right now the network is *trying* to promote #13 Ohio State at Penn State for Saturday night primetime – not exactly undefeated Notre Dame at undefeated Florida State.

As for the long term, the Big Ten is one of the last few major rights deals left on the table up for bidding.  Fox will be a serious bidder for the entire rights portfolio given they own about half of BTN and televise the conference championship game.  (SEC coaches could ask the same question of that relationship, by the way.)  However, ESPN will surely not want to lose out on B1G rights entirely to Fox or even NBCSN and allow them to become more serious players in the college football world and break up their monopoly.

But the Big Ten, nor any other conference, is as inherently tied at the hip to ESPN as the SEC is, which is what leads to college football coaches at major programs questioning what it means for the good of the sport.  That’s what leads conspiracy theorists to say ESPN has it in for Florida State and Jameis Winston to help SEC schools.

Nowhere is the separation between church and state – ESPN’s business interests and journalistic call to neutrality – more blurred than college football.  The Longhorn Network and SEC Network will always lead to questions of whether or not they can cover college athletics fairly.

It may or may not be true, but as long as the ESPN-SEC relationship is that close and that lucrative, it’s going to always provide ammunition for skeptics and critics.  ESPN has relationships with all these parties, but the SEC will always have favored nation status because of ESPN’s backing of the SEC Network.  And ESPN’s power over the sport should lead to constant checks on how their influence is perceived.

And it’s not just the ESPN and SEC.  You could say the same thing about NBC and Notre Dame.  Or Fox and the Big Ten.  That’s the unfortunate truth of college football – the media influence on rankings and polls and the conflicts of interest at hand will always make for skepticism.  That’s why our only hope is a truly informed, educated college football playoff selection committee that exists outside the bubble of those complicated relationships.  It’s a fleeting hope, but hope nonetheless.