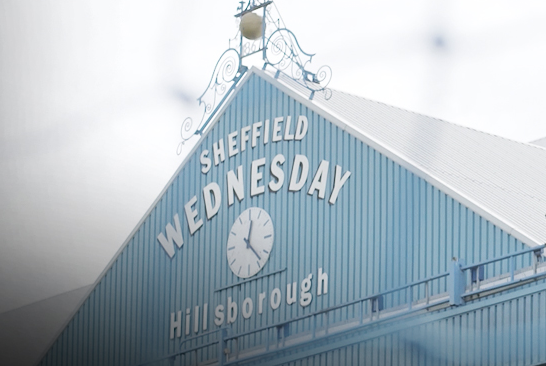 Review – When the warning came on the screen at the beginning of Hillsborough, you knew you were in for an emotional roller coaster not typical of other sports documentaries.

Hillsborough is not your standard sports story – it’s a story about a fight for justice.

ESPN launched their special 30 for 30 “Soccer Stories” series last night with Hillsborough directed by Daniel Gordon.  The series is a spinoff of the acclaimed 30 for 30 documentary series highlighting 8 stories from the beautiful game in the lead-up to the 2014 World Cup.  Hillsborough is the first of those docs and 1 of 2 to be a full-length feature, clocking in at 2 hours with commercials.

The documentary premiered in the states on April 15th, 2014 – the 25th anniversary of the Hillsborough Stadium Disaster.  Because of a current inquest into the events that transpired, the documentary can’t legally be shown in the UK.  That day in 1989 Liverpool played Nottingham Forest in an FA Cup semifinal match at the neutral home ground of Sheffield Wednesday – Hillsborough Stadium.  96 Liverpool fans would not return home as they were killed in a crush of humanity as human beings were herded like cattle into dangerous pens in the Leppings Lane end of the ground.

Hillsborough begins by setting into place the reasons how the death of 96 fans at a sporting event could happen.  For American sporting fans, it’s an unthinkable series of tragic events.  A stadium that was woefully out of date, a police chief that was woefully unprepared, an emergency protocol that was non-existent, and a situation that clearly spelled out extreme danger in hindsight.  Tens of thousands of Liverpool fans were asked to go through just a few turnstiles and enter into a well-known bottleneck in the stand.  Just 8 years earlier, fans had to escape the stands thanks to an overcrowding situation at another FA Cup semifinal between Tottenham Hotspur and Wolverhampton Wanderers at Hillsborough.  As Liverpool fans all rushed towards the area directly behind the goal, they were literally running into a death trap.  With the central pens fenced in on all sides, there was nowhere for Liverpool fans to go as the throng of humanity outside the stadium pushed everyone inside.

The story is told in Hillsborough without a narrator.  Rather, it’s more of an oral history with pieces of text filling in the necessary information.  The story is told by Liverpool fans who were there that day, police officers on the scene, journalists, and families and friends of those who were lost.  This decision brings an incredible amount of weight to the show.  Having these people tell their own story (when as we find out their voices had been shut down for 20 years) is an important decision.  It provided enough background that someone unfamiliar with the story could jump in immediately.  It was revealing without being exploitative.

What makes Hillsborough so jarring is the incredible amount of footage from that day in April 1989.  As a soccer fan and a Liverpool supporter, the word Hillsborough and the cry of “Justice for the 96” are synonymous with the team.  If you’re an American fan of the EPL, you may have even tried to learn about the Hillsborough Disaster through Google and Wikipedia searches.  Seeing the footage of fans trying to climb over one another to save their lives makes it very real though, whether you previously knew about the disaster or not.  Surveillance footage from that day is used as is the original commentary from legendary BBC announcer John Motson.  The film walks you through almost each minute of the tragedy and how it happened both from the sides of the fans and the police officers who spoke in the film.

As the film hits the midway point, the story turns from the tragedy itself to the aftermath and the decision by police to try and paint the Liverpool fans as drunken criminals instead of victims.  Hillsborough exposes what can only be described as inhumane behavior by the authorities to slander the names of innocent Liverpool fans.  As author and reporter Phil Scraton said in the film, “The price of Hillsborough is the price of institutionalized injustice.”

The institutional injustice came from police chief David Duckenfield telling the FA that fans had forced open a gate to get into the stadium when he himself had given the order.  It came from South Yorkshire Police who altered witness statements, even from their own members, to remove their own responsibility and blame fans.  It came from coroner Stefan Popper’s decision to take the blood alcohol levels of all the Liverpool fans who died, even children.  It came from The Sun tabloid, who printed this infamous cover in the days after the stadium disaster.  To this day it is still boycotted in Liverpool.

Although the headline said The Truth, it was all lies.  To think that the authorities and the media conspired to slander the good names of innocent fans is one of the most abominable and astonishing things you will ever see.

As the documentary moves into its later stages, the fight for justice takes center stage.  The families of the 96 were let down time and again although new information was coming to light. The actions of Phil Scraton to publish the real truth about Hillsborough sees him emerge as a central figure in the documentary.

It’s incredible to think that only at the 20th anniversary memorial of the Hillsborough disaster that the fight for justice began to gain any real momentum.  Here’s the powerful scene shown in Hillsborough where Liverpool fans began their “Justice for the 96 chant.”

In 2012, the Hillsborough Independent Panel definitively declared that the fans were not the cause of the disaster.  Over 40 people could have been saved that day in 1989 with proper care.  As a new inquest is ongoing into the accidental death verdicts, the fight continues for the families and friends of those who died at Hillsborough.  If there’s one critique you can make regarding Hillsborough it’s a desire for more context surrounding the fallout from the disaster and the impact on sports and society in the UK as a whole in the 25 years since.

The impact of the disaster is certainly still felt in Liverpool.  At the club’s most recent game against Manchester City, a victory that ensured Liverpool stayed in first place in the English Premier League, 96 seats were left empty as a tribute.  Liverpool captain Steven Gerrard was seen in tears at the final whistle.  His cousin, Jon-Paul Gilhooley was the youngest Hillsborough victim at just 10 years old.  Even he had his blood alcohol level checked in an effort to criminalize the dead.

The most powerful imagery in Hillsborough is simply seeing the weathered faces of those whose loved ones went to a football match and didn’t come back home.  Faces like Margaret Aspinall, the chair of the Hillsborough Family Support Group.  You can see the struggle for justice in their eyes and the toll that the 25 years of mourning and injustice has taken.  Looking into their eyes shakes you to the core and tells you this is far more than a soccer story, it’s a story about human rights.

Rating – Sports documentaries should ideally do one of two things – either tell a well-known story in a new way or make people care about a story that they may not be familiar with.  When a documentary can not only enlighten viewers, but draw an emotional response from them as well then it reaches the top drawer.  Out of all the 30 for 30 documentaries, Hillsborough may be the most emotional viewing experience.  No matter if you’re a soccer fan or whether you were familiar with the story going in, Hillsborough grabbed you and brought you into the struggle of the families for justice.  That’s not just telling a good story or producing a good documentary, that’s powerful.  In fact, it may be one of the most powerful stories ESPN has ever aired.  Justice for the 96, indeed.  10/10

* Hillsborough will re-air Sunday night at 10 PM ET on ESPN2.