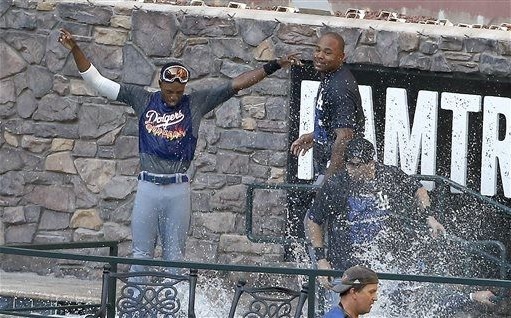 Yesterday, I brought you the initial reaction to Poolgate, the controversy that boils down to "get off my lawn!" As yesterday went on, the reaction quickly spiraled out of control thanks to the Arizona media. The worst however, may belong to Dan Bickley of AZCentral.com.

Not to paint with broad strokes, but the Dodgers are idiots.

Yasiel Puig thought it OK to blow off a Diamondbacks legend in his own ballpark, and everyone in Dodger Blue covered for him.

The legend in question is Luis Gonzalez, who was a five-time All-Star and finished in the top 15 of MVP voting once. When he had his awesome 2001 season, Puig was ten years old and living in Cuba.

A handful of others thought it OK to mock another team’s playoff tradition, jumping in the Chase Field pool after winning the National League West on Thursday. And nobody thought to stop them.

It happened once. Traditions happen more than once. And how exactly was anyone going to stop the Dodgers? By chasing them with baseball bats?

Said it before: I really wish Randy Johnson would un-retire and sign a one-game contract for 2014.

Randy Johnson is 50, and his velocity had fallen far below his career average during his last season of 2009. But hey, championing an old man to come out of retirement so he can throw at Dodgers hitters is such a classy move.

On Wednesday morning, I made a case why the Diamondbacks needed to watch the Dodgers celebrate on their own field: Motivation. Incentive. A lingering, burning reminder to carry them through the offseason. How else could this team catch a cash-flush juggernaut?

Call me crazy, but maybe they shouldn't have thrown stupid amounts of money at players like Jason Kubel and Cody Ross and spend their money wiser. Not completely collapsing in the second half would be a great start too. Also, if you don't want the team to clinch in your stadium, how about beating them in the clinching game? It's not like the Dodgers won the division by default, they beat the Diamondbacks to knock them out of the NL West race.

I concluded by hoping the Dodgers would really pour it on. Like dancing on the dugouts. Maybe Puig would even jump in the pool. I never thought they could actually be so stupid, so classless, so ignorant.

You wanted something to happen, then were stunned when it did happen. Keep in mind, the gentleman now calling the Dodgers classless for jumping in a pool had just, a couple of paragraphs earlier, wanted Randy Johnson to come out of retirement and start head hunting again.

When the Diamondbacks clinched the division in 2011, their post-game pool party was an organic masterpiece. The moment became part of the mythology of Chase Field, where the pool became much more than a sponsorship gimmick and showcase for high-dollar fans.

"The mythology of Chase Field" might be the greatest thing written this year. Chase Field is 15 years old, has played host to one World Series, one All-Star Game, and its funding enraged people so much that a county supervisor was shot when she voted in favor of an increase in sales tax. Aside from Luis Gonzalez's World Series winning hit off of Mariano Rivera 12 years ago, can you name a memorable moment in the history of Chase Field? Now *that's* some epic mythology.

For Diamondbacks players, it became the reward at the end of the journey. Almost like the Pacific Ocean for Lewis and Clark.

Ignoring the ridiculous comparison of jumping into a pool to Lewis and Clark's two year trek to the west coast, how was it a reward for the Diamondbacks two years ago but not for the Dodgers on Thursday? Maybe they specifically wanted to clinch in Arizona so they could jump in the pool and point and laugh at the team that blew a 9.5 game lead over the Dodgers in the span of a month. Also, if that was the reward for the Diamondbacks two years ago… how was it organic at all?

Technically, it's baseball history. I mean, it happened once, so by definition, it's history. That doesn't mean it's a significant part of history, but hey, its history!

And now the Diamondbacks have only one option: They need to stage a high-profile draining and cleansing of the pool. Maybe even bring in Bill Murray in a HAZMAT suit.

And then send the bill to Magic Johnson.

I hope that draining and cleaning gets done before the final series of the year with the Nationals. It sure would suck if the fans that paid $3500 per game for the pool suite wouldn't be able to swim.

This is the general sense I'm getting from these angry Diamondbacks media types: the Dodgers violated a tradition (that isn't a tradition), and as a result, they're classless pigs (even though the Diamondbacks incited a brawl earlier in the season against the Dodgers). Isn't entitlement fun?!